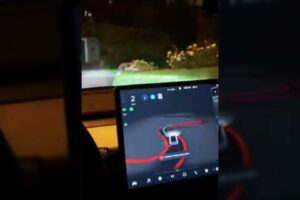 The driver never intervened once to correct the car’s path on this twistiest of city streets.

Lombard Street, constructed in 1922 in San Francisco, is known as one of the world’s most winding pieces of urban road, thanks to its eight tight hairpin turns that need to be tackled in order to get to the other side. Even some drivers have trouble guiding their car along this road, so what will a Tesla equipped with the latest Full Self-Driving Beta Version 9 perform?

We’ve seen FSD-equipped Teslas going around the same road, but they were older versions before the switch to a purely camera-based way of perceiving the world, called Tesla Vision. Based on what we saw in older videos, a Tesla with FSD was capable of driving on Lombard Street safely, but sometimes the vehicle required driver intervention.

In this latest video shot in a Tesla with FSD V9, the driver @WholeMarsBlog never touched the wheel once. It still wasn’t a smooth drive, as the car sawed at the wheel in order to not hit the walls on either side of the road. Graceful it may not have been, but it’s still impressive that the car did it all on its own this time.

Lombard Street is special as it really challenges self-driving cars. However, in order for an autonomous vehicle to be deemed safe and its software final, it has to be able to find its way around unusual roads, roundabouts, around improperly parked cars that stick out too much into the road or roadworks that block off the road in unusual places that require the car to do a lot of processing in a very short time.

Based purely on how much the steering wheel moves from side to side in this video, it’s clear the Tesla is still a bit flustered by this street. It even slams on the brakes twice because it thought it was going into the wall. It’s still impressive, but it needs more fine tuning in order to instill confidence in the driver that it can do it.