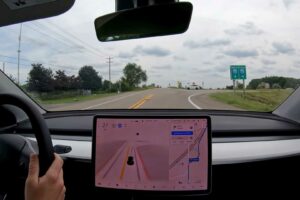 Perhaps Tesla’s FSD subscription isn’t meant to be added permanently. Pay for a month here and there when you need it most.

We’ve read plenty of opinions about the subscription prices for Tesla’s Full Self-Driving Beta package. Some people seem to think $99 to $199 per month is pretty reasonable. On the other hand, there are many Tesla fans and owners who say it’s way too expensive.

Perhaps people are simply looking at the situation wrong. Those who absolutely wanted FSD right away have had the opportunity to pay in full for some time now. CEO Elon Musk warned that the price would rise, so people who paid early got a better deal than those paying today. It seems some folks were waiting for the subscription option – not to mention waiting for the tech to be “ready” – before taking the plunge.

Now that the subscription option is available, any Tesla owner with an FSD-capable car can get the feature for $199 per month. Folks whose cars already have Enhanced Autopilot will only pay $99 per month. If you add either of those numbers up over the life of a car, it could get pretty pricey.

With that said, if you plan on keeping your Tesla for a long time, paying in full for FSD may make the most sense. And, we suggest doing so sooner rather than later, since the price will likely continue to rise.

It seems the subscription is better for temporary, intermittent use. If you simply want to try FSD, you can subscribe for a month and then cancel. If you try it and feel it’s not “ready” yet, cancel it and wait to subscribe again once there have been some updates.

There’s really no reason Tesla owners can’t just rely on Autopilot on a regular daily basis, and then add the FSD subscription for long road trips, or for whatever reason they choose. Fortunately, Tesla has made the FSD subscription easy to add, as well as equally easy to cancel. The fact that it’s on a month-to-month basis with no cancellation penalties is something many folks seem to be overlooking. Check it out:

Teslarati points out that this would be a great option for summer road trips, and we tend to agree. However, we also think it’s a solid option for folks who are waiting on specific “progress” before buying in. Tesla owners will be able to subscribe, test the feature, and decide if they want to keep it for a time. If not, they can cancel, wait a few months for the next big update, and try it again. If there comes a point that the FSD tech thoroughly impresses them, perhaps they will decide to pay in full.

Finally, if you are planning on getting a new Tesla in the near future, the monthly FSD subscription would make the most sense. It wouldn’t make sense to pay in full for FSD, sell your car, get another Tesla, and have to pay all over again.

We’d love to know what you think of all this. Start a conversation in the comment section below. In the meantime, check out FSD Beta Version 9 in action: