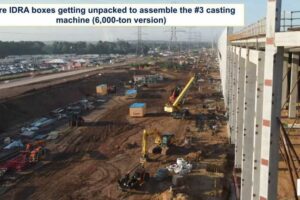 It seems Tesla is about to set up yet another Giga Press for upcoming Model Y production in Texas.

A few days ago, Teslarati reported that Tesla had received a shipment that consisted of a massive box from IDRA Group. It would only make sense that the contents of the box could be related to a Giga Press, since we know that’s what IDRA makes, and we also know that Tesla has already purchased and installed some of these large casting machines.

The initial information came from a tweet by Austin Tesla Club:

With that said, it’s important to note that people first spotted the IDRA crate in the Tesla Gigafactory Austin flyover embedded at the top of the page, which was posted by Jeff Roberts on August 15, 2021.

While people were almost certain the boxes contained something related to the Giga Press, there was no way to know for sure. Perhaps it was just parts, or maybe Tesla was ordering something else from IDRA to supplement the machinery it has already purchased. Some speculated that Tesla has something new up its sleeve, and we’ll have to wait to learn more.

Fast forward to just a day later, and another Austin Tesla factory flyover revealed more IDRA boxes. Reportedly, the boxes contain the parts for another 6,000-ton Giga Press. For those unaware, the IDRA products are massive diescasting machines that Tesla is using to cast large parts for the Model Y. However, the machines don’t weigh 6,000 tons, rather, that figure applies to their capability.

As you can see from Joe Tegetmeyer’s August 16, 2021 flyover below, the boxes are clearly marked, and there’s also a spot being prepped for another Giga Press. You can see that Tesla is now preparing the foundation for the machine’s installation. Check out the video around the 15:30-mark to see for yourself.

Head down to our comment section and let us know what you think.