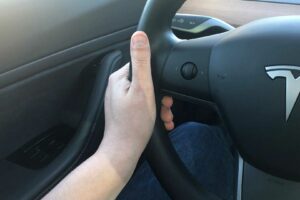 Tesla may be planning to release updated or revamped versions of its Autopilot and Full Self-Driving (FSD) Capability features. New information has come to light about potential hardware changes, which would go against what Tesla has been promising all along.

As you may know, Tesla – and, more specifically, CEO Elon Musk – has been promising completed Full Self-Driving (FSD) for some time now. There’s also been plenty of talk about an unassisted coast-to-coast Tesla trip, a fleet of robotaxis, and the like. However, the technology has been much harder to “solve” than Tesla expected.

Tesla has been saying for years now that every car it produces has all the hardware necessary to be able to accomplish the above. After sharing such goals, the company also removed the radar from its vehicles in favor of a camera-based vision-only setup, which has proven quite successful. More recently, it came to light that Tesla is also removing ultrasonic sensors from its cars, and we know full well that Musk is very opposed to the use of Lidar.

During the time that Tesla’s EVs were supposed to be fully equipped with the hardware to drive themselves, the automaker was forced to do computer and camera upgrades to bring older vehicles up to date. However, despite years of work and many incremental software updates, Tesla’s cars still can’t completely drive themselves. The company insists that a driver must be present and ready to take control at any time.

Unlike most legacy automakers, Tesla makes changes to its vehicles’ hardware on the fly. This means that at any given time, it could begin using new hardware in any of its vehicles. That said, the automaker has noted that if you own a vehicle and new hardware is required, it will perform the upgrade free of charge.

More recently, it has become clear that Tesla will likely have no choice but to make some significant updates and upgrades if it’s going to truly achieve a much higher level of vehicle autonomy. According to Electrek, Tesla may be adding a radar back into its cars as soon as this month. The publication also notes that the refreshed Model 3 will likely come to market with a new hardware suite for Autopilot and FSD.

Additional information has emerged about Tesla’s Autopilot Hardware 4.0 via regulatory documents from China. Electrek says Tesla makes such changes in China first, so these documents should give us an idea of what to expect going forward.

The leaked document reveals Tesla’s plans for a front-facing camera setup with two higher-resolution cameras to replace the current setup, which has three lower-res cameras. The details also show that there will be some sort of heat to help keep the cameras clear, and the heating system will also be used for the cameras on the B pillars.

Electrek writes that while the Model 3 prototype also seemed to have headlight or bumper cameras, these aren’t mentioned in the leaked regulatory documents.

Hopefully, Tesla will provide more details soon. If it does release a new Model 3 with a new hardware suite, one would assume all vehicles would have to get the updates. However, Tesla has always said the current hardware is enough to run the ever-changing Autopilot and FSD software, so who knows? This topic definitely deserves some conversation in the comment section below.