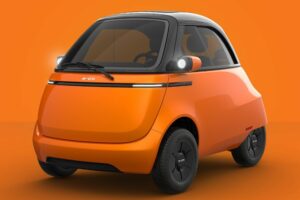 After facing some development headwinds, the Isetta-styled Microlino 2.0 is headed into production, combining retro bubble car packaging with an electric drivetrain. The Munich IAA Mobility show served as the launch point for the pocket-sized EV.

Featuring a 56-hp motor, the two-seater is slated to be offered in three battery flavors/trims: Urban with a 6-kWh battery, Dolce with a 10.5-kWh battery, and Competizione with 14-kWh of juice on tap. These three versions will serve up projected ranges of 60, 109, and 143 miles, respectively, allowing the bubble car to exceed the ranges of some much larger electric models currently on sale. The Microlino 2.0, of course, won’t be venturing out on the autobahn with its top speed of 56 mph.

The good news with batteries of this size is that charging time should not be an issue either—the company says that the Microlino can be recharged with a wall outlet in just four hours.

The Microlino was first previewed in concept form several years ago, so its journey from concept to production readiness has not been short. The company expects the initial production volume to be 7500 units a year with over 24,000 buyers having already placed reservations for a car, which will be built in Italy and sold in EU countries, starting in Switzerland first. 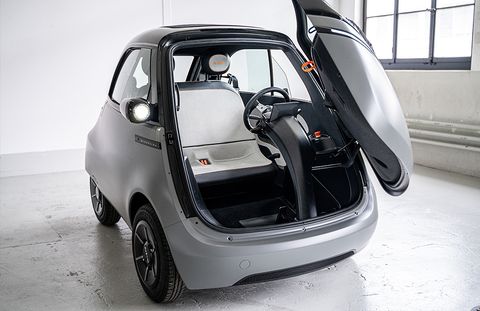 “Together with our partner CECOMP we have established a new company, Microlino Italia which will be responsible for production,” Micro Mobility Systems said earlier this year. “At the beginning of the Microlino project we never wanted to be manufacturer ourselves but we realized that this is the only way to control the quality and at the same time reduce the cost of production.”

Just like the original Isetta and a number of other bubble cars of its time, the Microlino 2.0 offers seating for two, positioned side by side, with one door up front for passengers, and a hatch for the admittedly snug 8.1-cubic-foot cargo area.

“Like on the new Ford Mustang Mach-E, we have eliminated the front door handle completely to simplify the design even more,” the company says. “To open the door, you need to unlock the car with the key and press a small button below the headlight. This will pop-up the door just enough for you to grab the door to fully open it seamlessly.”

With a starting price of €12,000, or about $14,200, the Microlino 2.0 will be aimed at urbanites who might still want a small city runabout, but may not own a full parking space for something larger than a motorcycle. Speaking of parking spots, a total of three Microlinos can fit into a single parking space head-first, which is one item that Smart used as a selling point as well, with an asterisk or two. 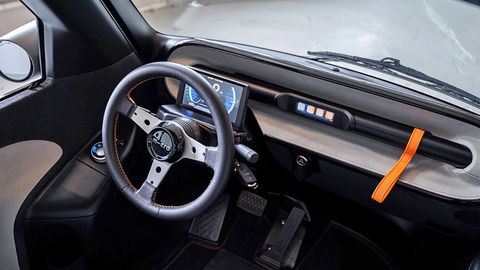 The Microlino 2.0 certainly holds an appeal beyond its cute and retro bubble-car design, as proven by the much more industrial-looking Citroën Ami and its Opel twin. The bigger question may be whether EVs of this size category will finally take off in Europe as a middle ground between highway-capable EVs and scooters or various types. With plenty of range, even compared to some modern electric cars, cargo and passenger room are just about the main compromises that buyers will have to make.

But as much as we’d like to see these stateside, we have some qualms about just how visible these will be in traffic given the hood height of current pickup trucks, for instance. Even compared to the Smart ForTwo, unavailable after Smart left the US market, Microlino 2.0 ownership on US roads could be a bit of a gamble, which is unfortunate.

Should the Microlino 2.0 be offered stateside? Let us know in the comments below.