The New Tesla Model S Is Crazy In So Many Ways 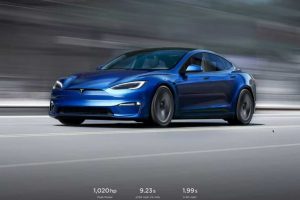 It’s definitely pretty incredible, but will it sell well?

Like many Tesla fans, our friend Andy Slye was completely wowed by the refreshed Tesla Model S and Model X, which comes as no surprise since they come packed with highly anticipated updates. In fact, he calls the Model S “crazy,” though that word is most likely in reference to the “Tesla Reveals Refreshed Model S Plaid: Production Starts In Q1 2021” model.

It seems the Model S and Model X haven’t sold nearly as well as they used to before the Model 3 came along. Now, with the Model Y available as well, it may not make much sense to many people to choose Tesla’s flagship models. This is especially true now that the Model 3 and Y have been refreshed for 2021, and the Model Y Standard Range and 7-Seat options are finally available.

CEO Elon Musk has insisted that Tesla never refreshes its vehicles. And, he’s said numerous times that potential updates to the Model S and X were simply not true. However, all of that changed last week when Tesla posted its Q4 2020 earnings report, which was followed by an investor’s conference call.

As it turns out, Tesla is refreshing the Model S and Model X. Both will now have many features found in the Model 3 and Model Y, including a horizontal touch screen, futuristic air vents, the ability to use your phone as a key, a heat pump, and much more.

In addition to the changes coming to the Model S and X, Tesla also officially revealed the all-new high-performance tri-motor Model S Plaid, which starts around $140,000. Interestingly, it has performance specs that nearly match the upcoming second-gen Tesla Roadster.

Check out the video to hear what Slye has to say about the refreshed Model S, Model X, and Plaid powertrain. Then, let us know what you think of these cars. Will people flock to buy them?