Home » Electric Cars » The Used Tesla Market Is Booming, & Model 3 Is The Leader

The Used Tesla Market Is Booming, & Model 3 Is The Leader 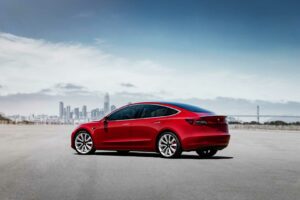 The used car market, in general, is gaining steam, and prices are high thanks to demand.

We’ve been reporting lately that the used car market is on a tear, and prices have been adjusted accordingly. With automakers facing a global chip shortage, many vehicle deliveries are delayed. For this reason, people are hitting the used market, which is leading to a surge in demand. Nonetheless, used Tesla sales are up in a big way, and the Model 3 is a primary reason.

The Model 3 first came to market in 2017, though Tesla didn’t ramp up production and sales until 2018. Leasing also wasn’t available right away. Now, as we hit the middle of 2021 (where the heck did the year go?), we should begin seeing more used Model 3 sedans available. However, they’re not cheap, and they’re selling out quickly in many areas.

According to a recent article by our friends at Teslarati, Teslas sell better than any other used EVs. Moreover, the Model 3 is seeing a spike in sales on the used market. The publication got the information from Recurrent, which is a company that tracks used EV sales in the US. Check out one of Recurrent’s many charts below:

“The used Tesla turnover rate of 5.5X current inventory in 90 days is actually inflated by Model 3 popularity. Used Model 3s sell even faster: 6.6X sales per vehicle in inventory. For all other used Teslas, it’s 4X and not as much of an outlier compared to other popular models from Chevy and BMW.”

Recurrent also estimated in a recent report that the Model 3 could make up some 40 to 50 percent of the used EV market in the US going forward. This means Model 3 owners shouldn’t have an issue selling their cars down the road, even at premium prices.

Are you in the market for a used Tesla? Let us know in the comment section below. We’ll leave you with this video full of used Tesla buying tips from E for Electric.