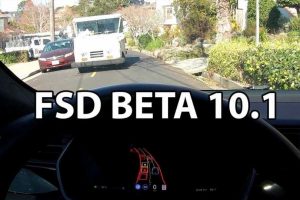 As more Tesla owners join the Tesla Full Self-Driving (FSD) Beta club, testing is bound to get much more varied and stringent. Tesla has to walk a fine line here, however. Putting the tech in too many driver’s hands could lead to carelessness and potential accidents. At the same time, to really test and improve the tech in “every” situation, having more people on the testing team makes sense.

Tesla owner, YouTube influencer, and FSD Beta tested AI DRIVR put his Model S through testing that he calls, “over the limits.” Before we watched the video, we hoped that this wasn’t a careful way to say “dangerous.” This is because “to the limits” and “over the limits” can mean two very different things.

However, as we’ve said on many occasions, we don’t have a Tesla with FSD Beta, and thus, we’re not FSD Beta testers. With that said, we have no firsthand idea of the technology’s abilities and/or limits. We’ll leave it for you to decide whether such testing is necessary, to the limits, over the limits, or outright dangerous.

AI DRIVR performed the testing in Berkeley, California, in areas where there are definitely some tricky intersections and the potential for very tough self-driving situations. We will say that the car performs quite well in many cases, and appears to be almost “human-like” with its decision-making processes. This is especially true when it comes to the Model S exercising extreme caution when necessary.

As far as we understand, Tesla receives a plethora of data from drives like this, so that it can work to incrementally improve the technology. CEO Elon Musk recently tweeted that Tesla is working to move all neural networks (NNs) to 8-camera surround video. He says this will enable “superhuman” self-driving.

Check out the video and let us know what you think of Tesla’s FSD Beta. Do you believe it’s improving notably? Will we actually have self-driving cars and robotaxis on the road in the near future? Leave us your thought in the comment section below.