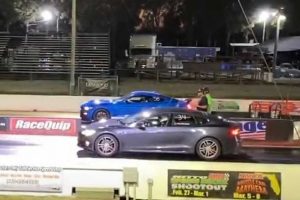 We can’t wait to see these races again once the Model S Plaid comes to market.

Yet another awesome series of quarter-mile drag races pitting the all-electric Tesla Model S Performance against a variety of hard-hitters. We all know the Model S Performance is one of the quickest production cars ever made. However, that doesn’t necessarily mean it will win every race. Regardless, it’s awesome to see an electric car kick butt against gas guzzlers.

You may remember when the Tesla Plaid Channel first appeared on YouTube. Essentially, the host of the channel owns a Tesla Model S Performance and has been waiting for the Plaid powertrain option to come to market. With the popularity of Tesla drag races, the channel made a wise choice. Moreover, getting people on board with the Plaid before it comes to market is a good way to get their attention.

This recent race pits the Model S Performance against the brawny Ford Mustang Shelby GT500, with its supercharged V8 monster. Another race highlights the Model S’ acceleration versus a supercar of sorts: The McLaren 650S, which is a $300,000 car. Finally, the Tesla faces off against another Corvette, though it’s specifically a ProCharged C5.

The Model S Performance is a large family sedan with a starting price south of $100,000. However, Tesla will no longer be offering the Performance trim, as it will be replaced by the tri-motor Plaid powertrain. The Model S Plaid starts at around $120,000. The range-topping Plaid+ will cost you about $140,000.

Check out the drag race video above and/or below) to see how the Model S fares against these tough rivals. We’ve also included a shorter version below. Keep in mind, Tesla Plaid Channel uses Ludicrous, but not Ludicrous Plus or Cheetah Stance launch. Place your bets, watch the videos, then leave us a comment.