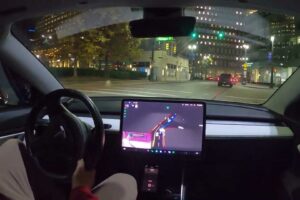 Our friend Toni Ezero is a Tesla Full Self-Driving beta tester, and he has been for some time. What’s interesting about Toni and his footage is that he lives in the Metro Detroit area and records most of his FSD beta drives in the downtown area. With each new FSD beta over-the-air software update, Toni heads out yet again to keep us apprised of the technology’s progress (or lack thereof).

Ezero’s YouTube channel is simply named “Detroit Tesla,” though he briefly changed it to “Tesla Viral,” which must not have worked out very well since he already changed it back. We prefer the Detroit-based name anyhow.

Before we move on, we will say that we appreciate Toni’s coverage since he seems to be honest and realistic about the FSD technology. In fact, while he’s often impressed with it in many ways, he’s criticized it more than enough to get hardcore Tesla fans all worked up and harassing him online.

At any rate, this latest installment features Tesla’s Full Self-Driving beta version 10.69.2.4. We just recently published Detroit Tesla’s video about update 10.69.2.3, which revealed that the driver-assistance system was a significant step backward, at least based on Toni’s experience. He noted that he dealt with many disengagements, and he had to make corrections often. Toni even went so far as to say he doesn’t know how Tesla can promise self-driving capability on public city streets by the end of 2022.

We’ve heard on many occasions that with each update to FSD beta, there may also be some steps backward. Tesla takes note of the system’s flaws and difficulties, which allows it to program potential software “fixes” for them. However, any such changes to the existing code and technology as a whole can cause complications and initiate new problems.

As far as the footage and Toni’s initial assessment of version 10.69.2.4 are concerned, he reports that he’s happy the update seems to have brought back the smoothness and overall driving comfort that appeared to have gone away with the last two updates.

He also notes that much of the system’s confusion seems to have disappeared, and there are far fewer small issues. However, this is not to say that the safety technology doesn’t still encounter some minor situations in which it still appears confused and tentative.

With all of that said, Toni only had to disengage one time during the entire ~30-minute drive, and it was only because he didn’t want the car to enter the freeway. He said that was his fault, and in the future, he’ll just let the Tesla get onto the freeway and then figure its way back off to avoid the disengagement.

Overall, Detroit Tesla admits that FSD beta version 10.69.2.4 is “pretty solid.” He even concludes that he can see the possibility of a wide release over the next month or so, and certainly ahead of the end of the year. However, to make that happen successfully, Tesla has some obvious tweaks remaining.