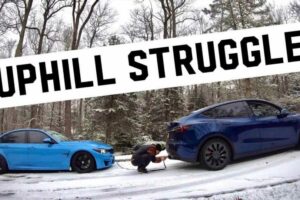 Here is an interesting test of a few cars on a snowy driveway, which shows some surprising results.

In the video, Tommy L Garage first checks the BMW M3, a rear-wheel-drive sports car with new winter tires (Continental). The traction control was turned off, and initially, everything went well.

However, once the car stopped in the middle of the snowy (and maybe even icy) uphill, it was not able to move up again. Even additional weight in the trunk did not help.

Well, the next car was the Tesla Model Y with all-wheel-drive, but equipped with all-season tires. The car was used in the Slip Start mode.

Surprisingly, the Tesla was able to slowly and smoothly climb up right from the start, as well as from a standstill in the middle of the snowy uphill. Not only that, the car quite easily towed the BMW M3 (in neutral) uphill.

That’s quite an impressive outcome, as we usually assume that winter tires are more important than all-wheel-drive. Well, the electric drive is so smooth that itcan cope surprisingly well in challenging conditions.

The video does not end there. The next car was the Porsche 981 Cayman, another rear-wheel-drive car with winter tires (Michelin). It appeared to be better than the BMW M3, but failed similarly in the end – not being able to move up from standstill, regardless of the traction control off or on.

To make things even more interesting. The fourth car, a 2017 Hyundai Tucson with front-wheel drive and used, all-seasons tires, managed to drive basically without issues.

Well, according to the comment sections, Tommy L Garage might try the BMW M3 once again, starting from in second gear or using narrower winter tires. However, for most of us who do not live in very snowy areas, the all-seasons tires – especially combined with electric all-wheel drive, appear to be good enough.