Home » Electric Cars » Where Will Tesla Get All The Steel For Cybertruck Exoskeleton?

Where Will Tesla Get All The Steel For Cybertruck Exoskeleton? 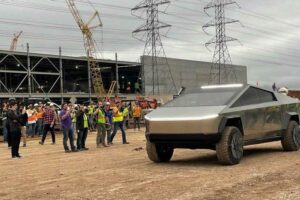 It seems all automakers, including Tesla, are being impacted by a global chip shortage, though Tesla has been able to overcome the issues far better than rivals. That said, chips aren’t the only automotive part that’s in short supply. In fact, across the globe, we’re once again seeing shortages of all sorts of products.

As Teslarati recently reported, it comes as no surprise Tesla was asked about supply chain logistics during its recent Q3 earnings conference call. According to the publication, Global Equities Research analyst Trip Chowdhry questioned Tesla about the stainless steel that will be used for the upcoming Cybertruck’s unique exoskeleton. He asked via Teslarati:

“Who is the supplier looking at if you look at the exoskeleton steel? Is the supply for that material sufficient for immediate ramp-up, say, in ’23, ’24 time for Cybertruck?”

“Yeah. Sure. So obviously, as we’ve noted in the past, we developed our own stainless-steel grade for the exterior of Cybertruck to meet both the durability and corrosion requirements required for an automotive world. With this raw material and others, as Drew mentioned, we continue to look at multiple sources.”

Teslarati reminded us that it mentioned one steel supplier that Tesla plans to use in the future: Steel Dynamics, which operates a factory in Texas. The facility is reported to be worth some $1.7 billion, and it’s only a few hours away from Tesla’s upcoming Gigafactory in Austin.

Moreover, Moravy’s comments on the call seem to suggest that Tesla will be working with several steel suppliers going forward. He added per Teslarati:

“We have made some early sourcing decisions in that, but I think we’ll keep that one internal, and we’ve already begun the first casting-ins of that. Rolling stainless isn’t so different from pulling any other material. It’s just about how hard the rollers are to get to that hardness level. And, you know, just like every manufacturing process we put in for every new vehicle, we’ll work with our suppliers and vendors to make sure those timelines and supplies meet the need and demand of our customers.”

Tesla hopes to begin small-scale production at its new Texas factory prior to the end of 2021, though it probably won’t deliver any cars produced in Texas until 2022 when it can successfully ramp up production. Once the Model Y is at full production capacity in Texas, Tesla will begin to focus on the Cybertruck.