Will Soaring Oil & Gas Prices Cause Tesla's Stock To Rise? 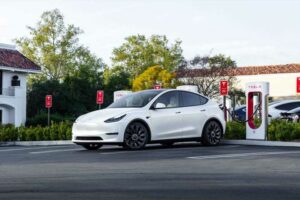 As Ukraine weathers a continued Russian invasion, sanctions are causing high oil prices, resulting in high gas costs at the pump for consumers. According to Oil Price.com, the event has many wondering if high gas prices could further accelerate Tesla’s rising stock prices and the overall adoption of electric vehicles.

Brent Crude oil hit a 14-year high of $139 per barrel earlier this month, compared to benchmark averages of just $70 in 2021 and only $43 in 2016. Analysts from Goldman Sachs and JP Morgan expect the company’s oil barrels to increase to $135 and $185 respectively this year.

The 14-year price hike came just as U.S. President Joe Biden began targeting “the main artery of Russia’s economy” by imposing sanctions on the country’s oil operations, adding that the move is “not without cost at home.” This “cost” is largely passed down to consumers at the gas pump, which could spark an even quicker move to non-petrol vehicles than previously thought.

EV automaker Tesla could be uniquely positioned to benefit from the rise in prices, especially since the news comes on the heels of Tesla being given final approval to begin producing vehicles at its new Gigafactory Berlin-Brandenburg and Giga Texas locations. With the aid of the new factories, Tesla is also shooting to double its annual production output to nearly 2 million cars this year.

In a note, Ives said he “cannot stress the production importance of Giga Berlin to the overall success of Tesla’s footprint in Europe and globally,” reiterating his $1,400 price target on the company’s stock alongside a $1,800 bull case price target.

In addition to high prices at the gas pump potentially causing consumers to buy electric, Tesla’s stock has already begun to see gains amidst the record oil prices.