Home » Electric Cars » Will Tesla's Presence In China Grow In 2021?

Will Tesla's Presence In China Grow In 2021? 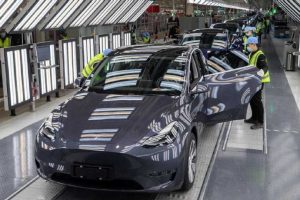 Tesla’s potential for growth in China is huge for the electric car company, as well as EVs as a whole.

Tesla is poised to have a big 2021. Giga Shanghai is beginning to hit its stride and expected to pump out a record number of vehicles. How many? In Tesla’s latest earnings report, the company stated a current capacity to deliver 450,000 vehicles. But could the number actually be bigger?

Tesla retail investor and enthusiast @Ray4Tesla shared this study via his Twitter account. Since the information is in Chinese, he was able to translate the info and come to his own conclusions.

Since Tesla’s massive Gigafactory in Shanghai recently reached weekly production capacity of 8,000 cars per week, the automaker doesn’t require a huge leap to reach (at least) 500,000 cars per year in 2021.

Tesla officially launched the Made-in-China Model Y in January and according to China Central TV (CCTV via another investor and Tesla enthusiast @JayinShanghai), 100,000 cars have already been pre-ordered by Chinese customers.

The SUV body type could turn out to be more popular in China. The launch of MIC Model Y compact electric SUV created so much excitement among potential customers that they flooded Tesla stores to get an in-person look. According to reports, people even waited outside Tesla stores in China to check out the newly introduced Model Y.

Meanwhile, Tesla has also managed to source lithium hydroxide for its battery production for the next five years from China recently. In addition, Tesla’s Supercharger Network in China has grown nearly 30% in the past two months and the company recently celebrated its 700th Supercharger at a ski resort in Beijing. It’s new Shanghai Supercharger factory recently opened as well.

Tesla’s efforts in China could start to become quite compelling as 2021 unfolds. The future could prove to be promising in a country that Tesla has made significant in-roads into over the past few years.

Written by: Iqtidar Ali. An earlier version of this article was originally published on Tesla Oracle.