The Ford F-150 has been redone for 2021, offering a new hybrid drivetrain, tons of usability improvements, and a slew of new tech. Numbers haven’t been announced, but Ford is targeting class-leading horsepower, torque, payload, and towing to help keep the F-Series far ahead of rivals from Ram and Chevy.

The biggest change is the new PowerBoost hybrid powertrain option, the first true hybrid truck since GM’s ill-fated Silverado and Sierra hybrids. But this isn’t just the eco-friendly option; by pairing a 35-kilowatt electric motor to the already potent EcoBoost 3.5-liter turbocharged V-6, Ford says the PowerBoost will offer more power than any other light-duty truck. Cruising range should exceed 700 miles and the tow rating will be above 12,000 pounds. It’ll also be available on every trim and in both rear-wheel- and four-wheel-drive configurations.

The other engine options—the 3.3-liter V-6, 2.7-liter EcoBoost, 3.5-liter EcoBoost, 5.0-liter V-8, and 3.0-liter PowerStroke diesel—all return for 2021. Power outputs for all engine options are unknown, though, so some could see a power bump. Opt for either EcoBoost engine, the Powerboost hybrid, or the 5.0-liter V-8 and you’ll be able to use your truck as a generator with Ford’s new Pro Power Onboard feature.

On the standard engines, Pro Power uses a second alternator on the engine to provide up to 2.0 kilowatts of power through dual 120-volt outlets in the bed. That’ll allow you to power things like circular saws, jackhammers, loudspeakers, or an air compressor off of your truck. A full tank can provide that power for 85 hours. You can also use Pro Power Onboard while driving to charge up tools and equipment. And since it’s run off a 24-volt system entirely separate from the truck’s 12-volt main battery, you don’t have to worry about it affecting the rest of the truck.

The F-150 hybrid will be able to supply up to 7.2 kilowatts with ProPower using the lithium-ion traction battery, which should provide enough juice to run a small job site for 72 hours. If you don’t need that much, though, all hybrid F-150s come with a 2.4-kilowat ProPower Onboard system standard. 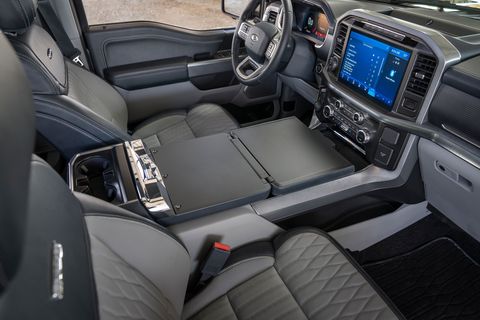 Usability improvements don’t end there, though. The new F-150 also features a fold-out workspace for the cab. Fold the gearshift down and flip out the panel and you’ll have a large, flat surface on which to sketch, use a laptop, eat, or set a toolbox. Collapsible storage bins cover the full width of the rear seat, giving you a lot more in-cab storage for precious goods. Out back, a redesigned tailgate features yet another flat workspace with holders for pencils, cups, and tablets. Clamp pockets and straight-edge surfaces are designed to help people use their truck as a mobile cutting surface, too.

You’ll also be able to option Max Recline Seats. They fold almost entirely flat, with the cushion rising to meet the seat back for a lie-flat bed experience. Combine that with ProPower and it’s not hard to imagine living out of this new F-150.

It’ll be more pleasant, too, as the F-150 gets an entirely new interior with bigger infotainment, an available digital instrument cluster, and much nicer materials throughout. More active safety equipment is also standard, with all F-150s packing automatic emergency braking and most getting upgraded safety features like blind-spot monitoring and lane departure warning. Come next summer, the F-150 will get a paid over-the-air update that will allow customers to upgrade to a hands-free semi-autonomous highway driving system, like Cadillac’s Super Cruise.

Finally, the styling has been updated with a broader stance and more aerodynamic shaping. The headlights now carry down into the bumper, a taller take on the F-150’s defining C-clamp headlights. That design is mirrored to the taillights, too. Ford says it’ll offer 11 different grilles and 13 different wheel options, so you should have no problem making your F-150 look different than your neighbor’s.

The overarching idea is to not just improve the numbers that truck companies brag about on commercials, but to make the F-150 a more well-rounded workhorse for its customers. And considering the millions of possible configurations, new hybrid model, upcoming EV, the generator mode, class-leading specs, hands-free driving hardware, and arsenal of clever productivity-focused features, it’s hard to imagine a truck owner feeling underserved by the new F-150.

END_OF_DOCUMENT_TOKEN_TO_BE_REPLACED

END_OF_DOCUMENT_TOKEN_TO_BE_REPLACED
We and our partners use cookies on this site to improve our service, perform analytics, personalize advertising, measure advertising performance, and remember website preferences.Ok