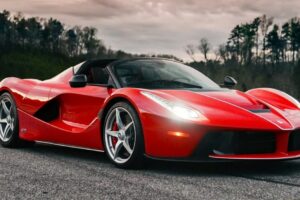 Previously, the most expensive car ever sold on BaT was a pre-war Mercedes-Benz 680 S Sport/4, which reached $2.8 million (£2.2 million). However, the resale-red LaFerrari Aperta, purchased by a user called Calculator987, has truly blown the classic Merc out of the water.

Designed to celebrate Ferrari’s 70th anniversary, the LaFerrari is the sixth of Ferrari’s special flagship models – following in the footsteps of the 288 GTO, F40, F50, and the Enzo. The LaFerrari has been the poster car for an entire generation, and just 210 examples of the roofless Aperta version were produced between 2016 and 2018. Ferrari was ultra-selective when choosing clients to purchase the hypercar, with only the most exclusive customers prancing horse customers being granted the opportunity.

The LaFerrari Aperta is propelled by the same 6.3-litre V12 hybrid unit found in the coupe version, which revs to 9250rpm and produces a whopping 950bhp and 664lb-ft of torque. Power is delivered to the rear wheels through a seven-speed dual-clutch transmission and an E-Diff3 electronic differential. Double-wishbone suspension features up front with a multi-link setup out back, while E-SCM electromagnetic dampers are fitted to each of the LaFerrari’s four corners. Ferrari’s F1 technical director Rory Byrne designed the hypercar’s carbon-fibre monocoque, which helps keep weight down to just 1255kg. With everything pieced together, the ‘Laf’ can reach a top speed of 217mph and accelerate from 0 to 60mph in just 2.8 seconds.

The roofless Aperta model enables the car’s lucky occupants to experience the feeling of wind being relentlessly blasted through their hair at speeds of over 200mph. However, this car also comes with the $71,000 (£57,556.15) carbon-fibre hardtop, so the car’s new owner will be able to enjoy the hypercar even if it’s raining or they’ve just styled their hair.