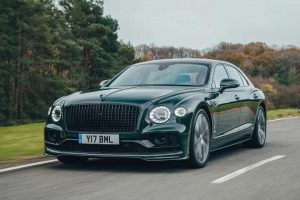 Don't fancy the W12? Bentley has just the thing…

Traditionally, the Flying Spur has had to fight for oxygen in the Bentley lineup. Always a four-door version of the bigger selling and more famous GT, the model barely had a life cycle to itself before it was swiftly overshadowed by the significantly more expensive and exclusive Mulsanne. And by the time the flagship went off sale – making the current Flying Spur the only Crewe-built saloon now available – the Bentayga was already well established as the multi-door Bentley of the moment.

Nevertheless, the latest Flying Spur has several things in its favour. It is raffishly good looking – much more so than its predecessor and by a factor of four or five over the bunion-like Bentayga. This is important, because luxury saloons need to tread the line carefully between sleek subtlety and proletariat-scattering presence, and the Spur does that as well as any serious rival. That it has been widely acclaimed as lovely inside ought to come as no surprise to anyone, but it's worth reiterating that its handcrafted approach still makes it the senior option to virtually any other six-figure saloon in the world.

And now you can buy it with a V8. The same twin-turbocharged 4.0-litre V8 that you can already have in the GT. That the engine is familiar from a number of other VW Group products ought to make it a lesser option on the pomp and circumstance scale (not least because Bentley charges you a lower price for it) but the 550hp unit is fresh from making the coupe an objectively better car, and with many of the same advantages promise here, it threatens to overshadow the W12 as the Bentley saloon of choice. Question is, does that make it the seriously upmarket saloon of choice, too? Let's get started…

We hardly need dwell here for long because while the lower asking price means a reduced choice of standard-fit options – walnut in the veneer department and a choice of five single-tone leather hides – it's fair to say that even V8 buyers will be expected to merrily indulge Bentley's delectable option list when it comes to the cabin, thereby producing whatever combination of trim materials best makes them feel warm and fuzzy. But it speaks to the Flying Spur's world-beating interior that it's hard not to savour the end result of 100 man hours – every one of them a labour of some craftsperson's love.

Of course, that's as it should be. The Flying Spur's premium over a Porsche Panamera or a Mercedes S-Class is part justified by a level of detail and discernible luxury that few manufacturer's can claim to replicate. The brand's continued ability to differentiate itself from the merely lavish is impressive – especially when not every button or knob or bit of switchgear impresses in isolation. It is the overall effect, underscored by a metallic glint or hand-polished finish or the all-pervading smell, that separates the Bentley from the also-rans. That it is now delivered with impressively comprehensive infotainment (courtesy of the wider VW Group, obviously) and a kick-ass stereo (courtesy of Bang & Olufsen or Naim, depending on where your tick landed) is another brick in a near solid wall of spare-no-expense buyer satisfaction.

The charm offensive continues in the back. Bentley plays down (or at least, doesn't play up) the idea of the Flying Spur being used as limousine, although apparently 40 per cent of previous owners reported carrying rear seat passengers at some point during an average week – which suggests that all four doors are getting plenty of use regardless. No occupant is likely to complain. Leg and headroom remain ample, and the seats plush. The latter offer ample (if not quite proper limo-grade) button-powered adjustment for the slumbering autocrat – or offspring thereof. Not unlike the front, the impression of first-rate comfort is virtually indivisible from a lingering sense of moneyed superiority, but it's never brash or braying in the Spur, as it can sometimes seem to be in the GT or Bentayga. Pure class, in other words.

Though it might seem somewhat anachronistic in 2021, Bentley's long-running attachment to the twin-turbocharged 6.0-litre W12 is easy to grasp. The engine delivers 664lb ft of torque from 1,350rpm – a colossal amount, summoned up with what seems like precious little effort. This is the Bentley modus operandi in a nutshell: maximum output, minimal fuss. No wonder it doesn't fear the eventual transition to all-electric propulsion. But until that time, it is the V8's job to replicate the feat with four fewer cylinders and a measly 568lb ft of torque from 2,000rpm.

And boy does it. The 4.0-litre engine's advantages are threefold. Firstly, obviously, it is significantly lighter than the W12 – by as much as 100kg according to Bentley, and if you take that into account it makes the deficit in peak torque much closer that it appears on paper. Secondly, lower reciprocating mass makes the V8 a livelier method of propulsion, which means you're inclined to engage with it more enthusiastically – which in turn means you tend to feel like you're making quicker, sleeker progress. Thirdly, the 90-degree, twin-scroll double blower 'hot vee' unit, in Crewe tune, is impossible not to like.

No matter that it's virtually the same iteration that appears in the mechanically similar Porsche Panamera Turbo (both models share the MSB platform), and it's of no concern either that there's plenty of headroom in the V8's tuning potential or that Bentley has to make do with an eight-speed dual-clutch transmission where a torque converter might have better fit the bill. The firm has consummately bent the engine and gearbox to its will and way of thinking. It is a pleasure to interact with almost across the board, and it confers that virtue to the Flying Spur around it.

It is not just about increased refinement either, although certainly there is much of that going on. At idle, you'll just about hear the V8 when cold, and not at all when warm. At low revs it emits to a gentle, womb-like hum. Nowhere is the ZF 'box smoother than it is here. But Bentley hasn't forgotten that its customers tend to be car lovers, too; push on with anything approaching real intent and there's just enough V8 growl issuing from the oval exhausts to remind you where your substantial premium went. It's an irresistible, triumphant compromise and wonderfully matched to the powerhouse in-gear performance being continually unspooled. It is not faster or cleverer than the W12, and nor is it as imperious. But it might still be better.

The knock-on effect to the way the Flying Spur actually drives is predictable enough. Relieving the front end of one large rugby player has obvious benefits, not least the effect on the car's weight distribution. And it's worth pausing here to consider that the W12-powered Spur was already a slouch in no regard. Three-stage air springs, active all-wheel drive, active anti-roll, all-wheel steer: the saloon was brimmed with tech aimed at making it handle with a finesse that few large cars aspire to. It does, too.

Little wonder then that the lighter model – even making do with passive anti-roll bars – is a chip off the old block. In its default and pitch-perfect 'Bentley' mode (the only one you'll ever need) it drives with terrific and surprisingly tactile elan. Crucially, for all the effortlessness emanating from the engine bay, the Spur does not endorse it in the control surfaces. The steering is reassuringly weighty and the pedal feel positive. The rate of response is tuned for consistency and context; the Flying Spur is not meant to seem particularly agile or dextrous – even when it is supplying you with untold quantities of both.

It speaks to the experience that it is best sampled on stretches of road you don't like much. Because the Flying Spur is terrific – possibly matchless – at hoovering forgettable or mind-numbing bits of tarmac into the nose, and remaking them as suety pleasure-flumes for you to dreamily devour. Nor does it matter much if you drive hugely fast or magnanimously slow; the car is built to flatter to both extremes. Granted, with some of the sporting focus gone, it doesn't change direction with GT-like intent. But it's more permissive and pleasant as a result. Precisely the trade-off its buyers will be expecting.

General discussion of Bentley asking prices is probably no more useful than pointing out that 25-year-old single-malt whiskey is quite expensive. Yes, it is – but you do rather get what you pay for, and people are happy to do so on that basis. The Flying Spur is a luxury item produced to the same kind of specialised standards. Its £153,900 starting price reflects that.

For the record, it also represents a saving of around £15k compared to the W12 – although realistically, those numbers are better thought of jumping off points. Our test car clocked in at £205,800. Granted, not every option is about timber choice or leather colour – the 'City' and 'Touring' specification, for example, include more than one item you might reasonably expect to get as standard elsewhere.

Expect running costs to be commensurate with that blithe level of outlay, although it's worth mentioning that Bentley considers the V8 the most frugal Flying Spur it's ever built. Thanks to its lower kerbweight and four-cylinder deactivation under light loads – achieved in a vanishingly small amount of time – the car is rated to deliver 22.2mpg combined economy. Which is sufficient for a claimed 'Grand Touring' range of more than 400 miles from the standard 90-litre tank.

For all its tangible, expensively rendered talent, one of the more remarkable things about the latest Flying Spur is just how genuinely cohesive and usable it feels. Driving a 5m-long, almost 2m wide, £200k Bentley around has the obvious potential for imposition or peril. Very large, expensive saloons have a tendency to shine on the motorway or a long, shingle driveway – and then weigh inconveniently on the mind elsewhere. Not the Spur. It is a treat to drive virtually everywhere, mostly because of its impeccable manners, but also because it seeks to isolate its driver only from the pitfalls of modern motoring, not the pleasures.

The V8 has simply amplified that desired effect. For a very modest deficit in straight line speed, the Spur has made gains virtually everywhere else. Being lighter in a car that makes no claims of lightness can only get you so far, but Bentley's saloon is a sweeter, better sounding, more satisfying steer with the smaller engine aboard. That it is also cheaper and better equipped to convey you to a more distant super-unleaded pump is merely confirmation of its must-have status – and not just among Crewe's downsized lineup, either. For PH's money, you're looking at arguably the best luxury saloon in the world.