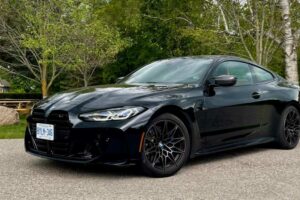 As of July, the province of Ontario’s official threshold for what constitutes “stunt driving” has been lowered by six mph. Now, anybody caught going over 25 mph on a road with a limit lower than 50 mph will have their vehicle impounded on the spot for two weeks instead of the previous penalty of one week. This is the perfect time, then, to test the new, 503-horsepower 2021 BMW M4 Competition, a car that can hit 60 mph in 3.8 seconds and quickly dash well into the triple digits without batting an eye.

Speaking of batting eyes, yes, this is how the M4 and M3 look now. In person, painted black, with a front plate, and from certain angles, it’s really not that bad. But any design requiring that many qualifiers to make it palatable is probably a design that inherently could be improved. I’m not here to talk about that, though. What’s way more interesting to discuss is how this car drives. And, as turns it out, the way this car drives is pretty goddamn great. 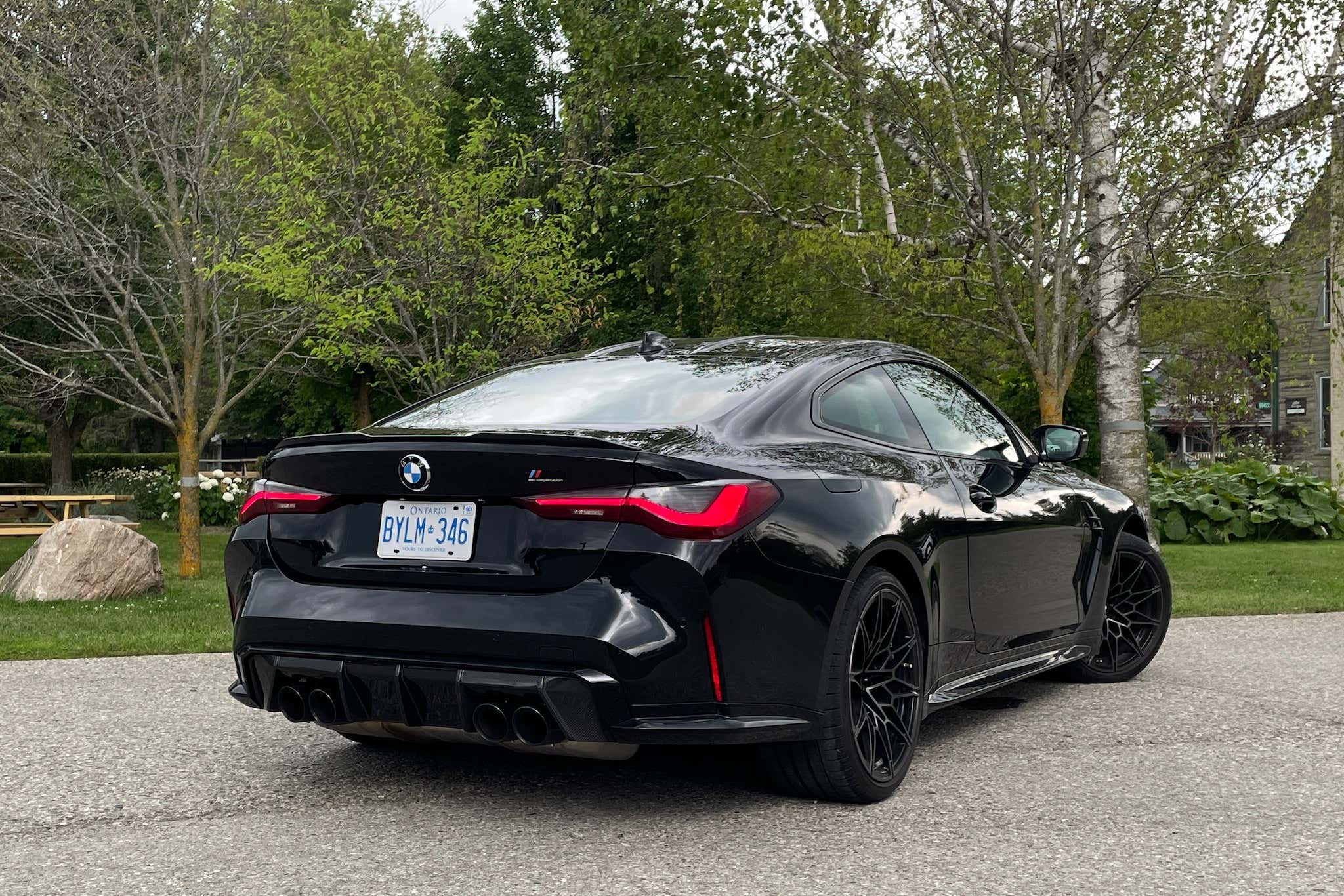 For the uninitiated, the BMW M4 is the highest-performing version of the 4 Series, itself a two-door version of BMW’s ever-popular 3 Series compact sedan. Spiritual ancestors include the legendary E30 M3 that was born in the mid-’80s, the bigger E36 M3 that came in the ’90s, the beloved E46 M3 that arrived shortly after the turn of the millennium, the V8-powered, Obama-era E92 M3, and, finally, the F82 M4, this car’s direct predecessor and the first to call itself an “M4” instead of M3 Coupe. 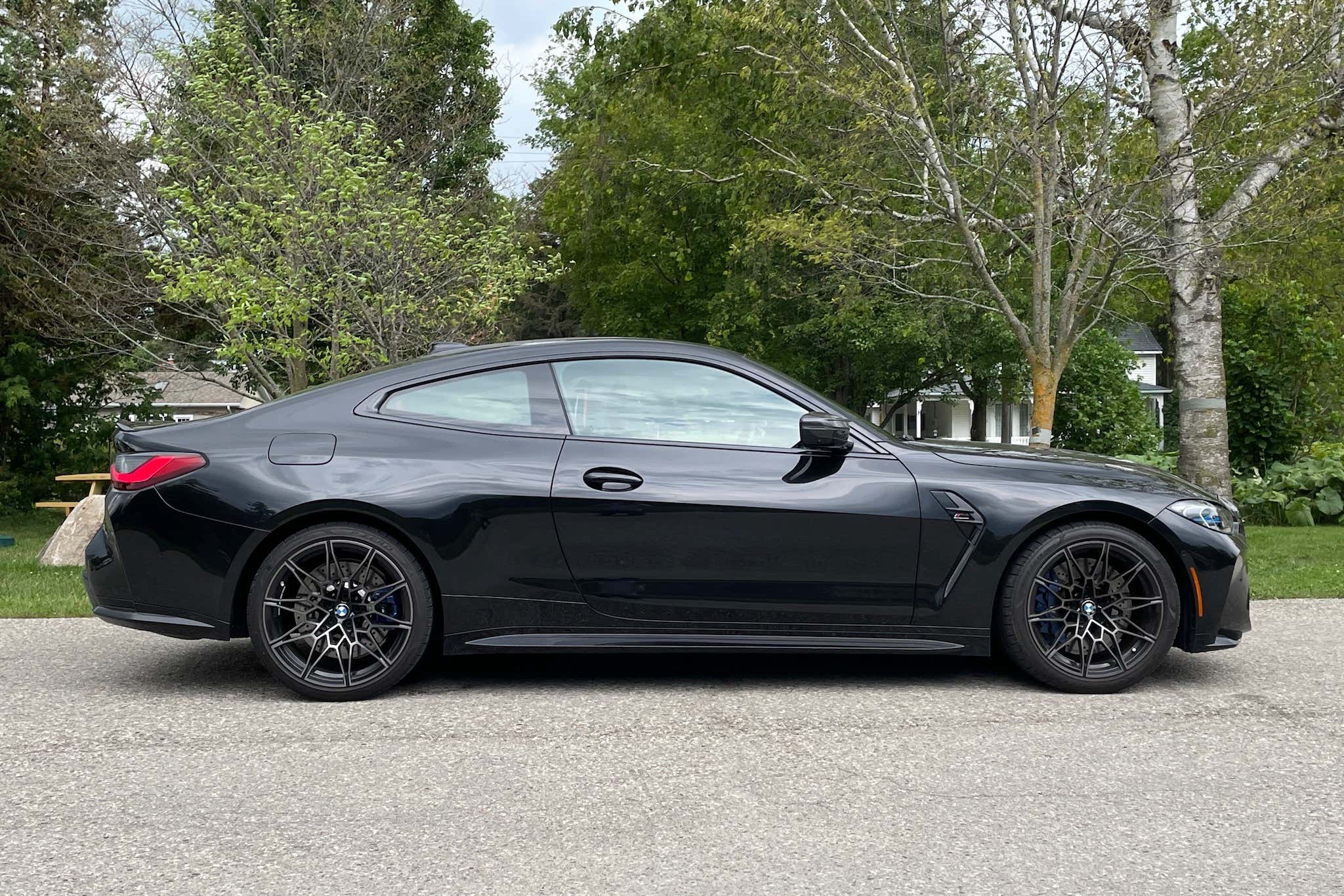 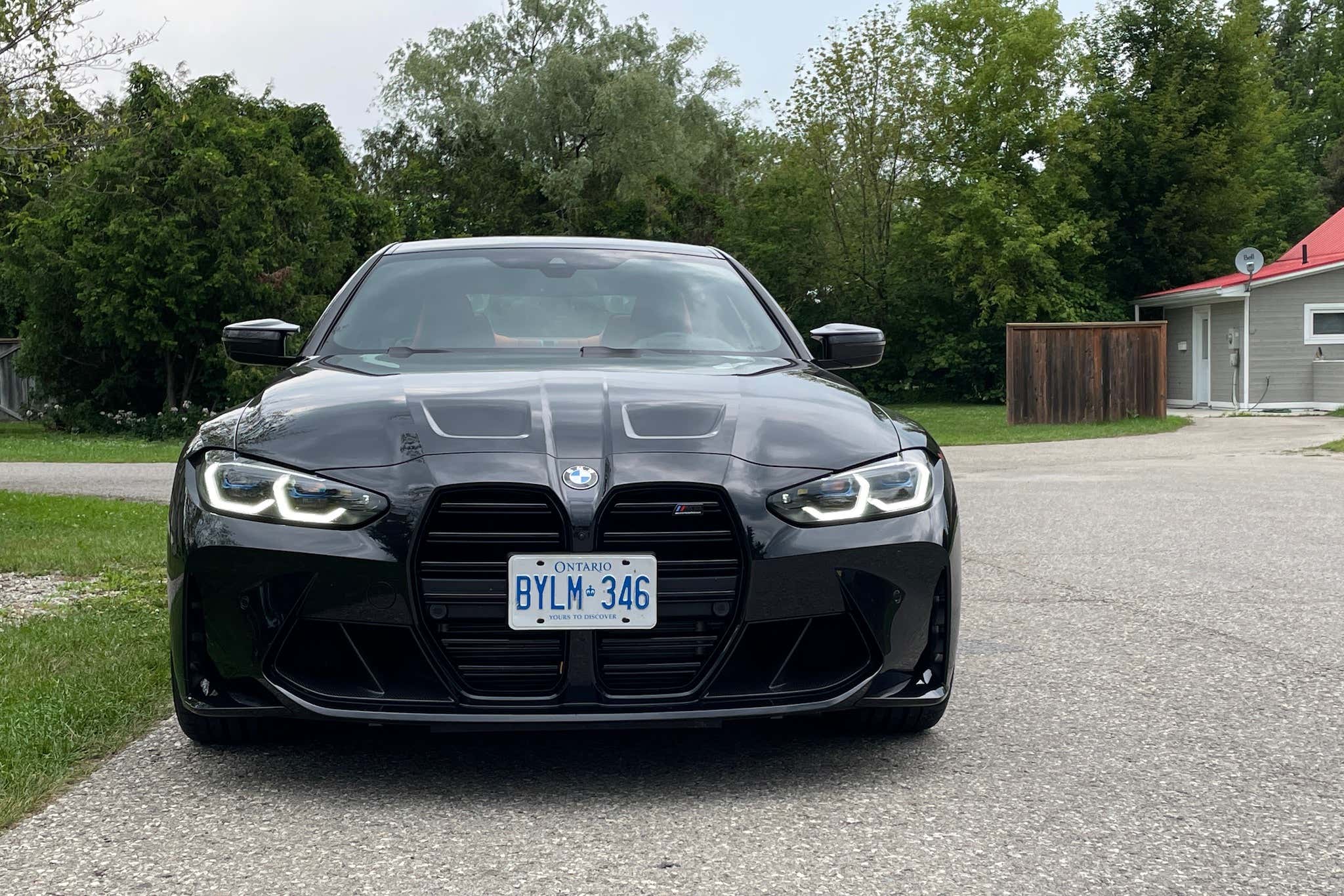 At least until the inevitable CSL/GTS/CS versions come along, this rear-drive Competition-spec M4 is the most potent M4 you can get, featuring 30 more hp than the regular M model and an eight-speed automatic gearbox instead of the non-Comp’s six-speed manual. Natural rivals include the Mercedes-AMG C63 S Coupe—a car that’s tipped to reinvent itself as a four-cylinder hybrid soon—as well as the Audi RS5.

Powered by the company’s new S58 twin-turbo straight-six first seen in the X3 and X4 M crossovers, the M4 Comp pairs the motor with expertly calibrated launch control that’s able to deliver prodigious straight-line pace. It’s verifiably and undeniable a Very Fast Car, but drag racing isn’t really something I’d posit as the M4 Comp’s raison d’être, especially in an era of sub-two-second EVs and performance SUVs from BMW’s own catalog, which can get up to speed sooner still.

Where the M4 really shines is in the corners. 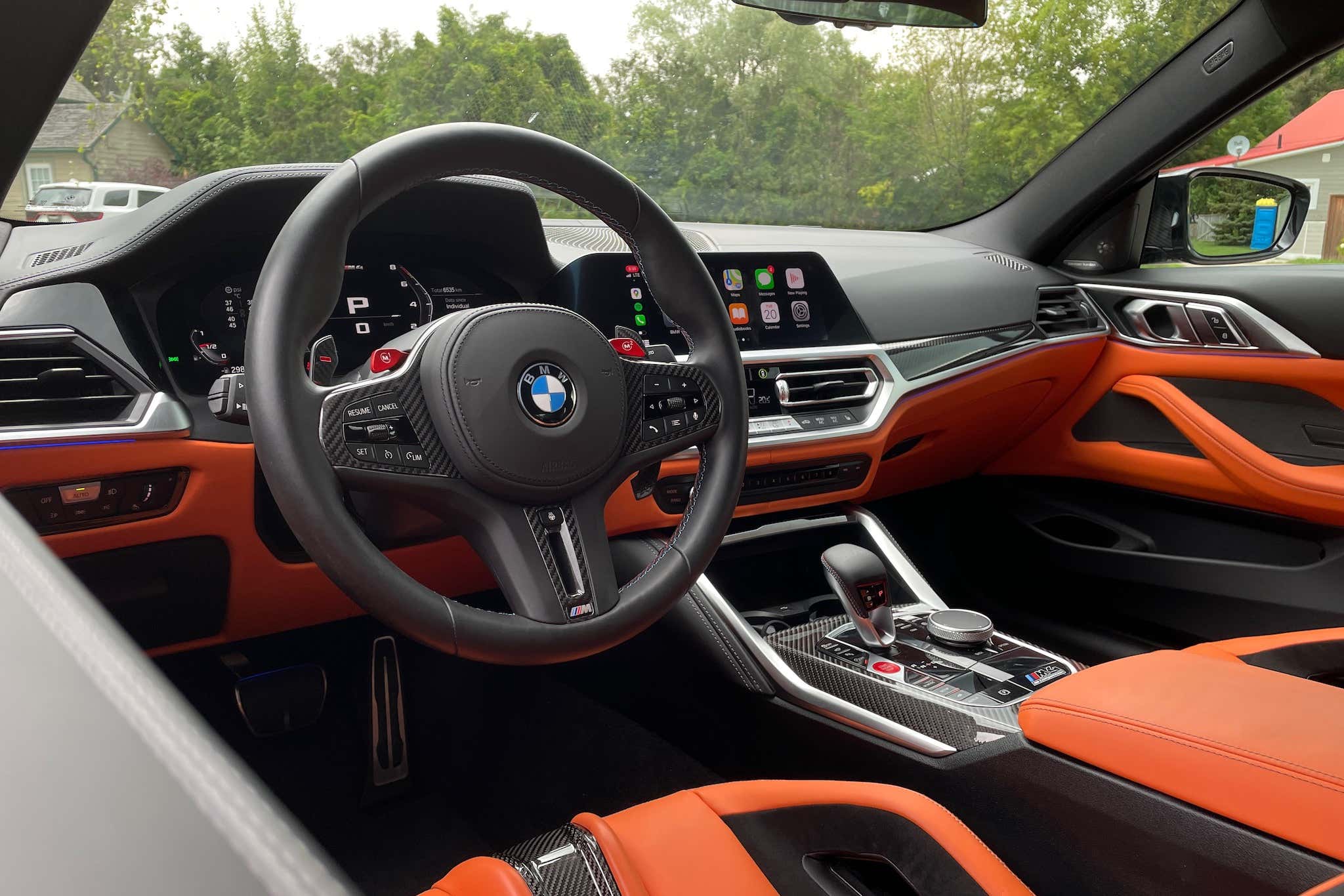 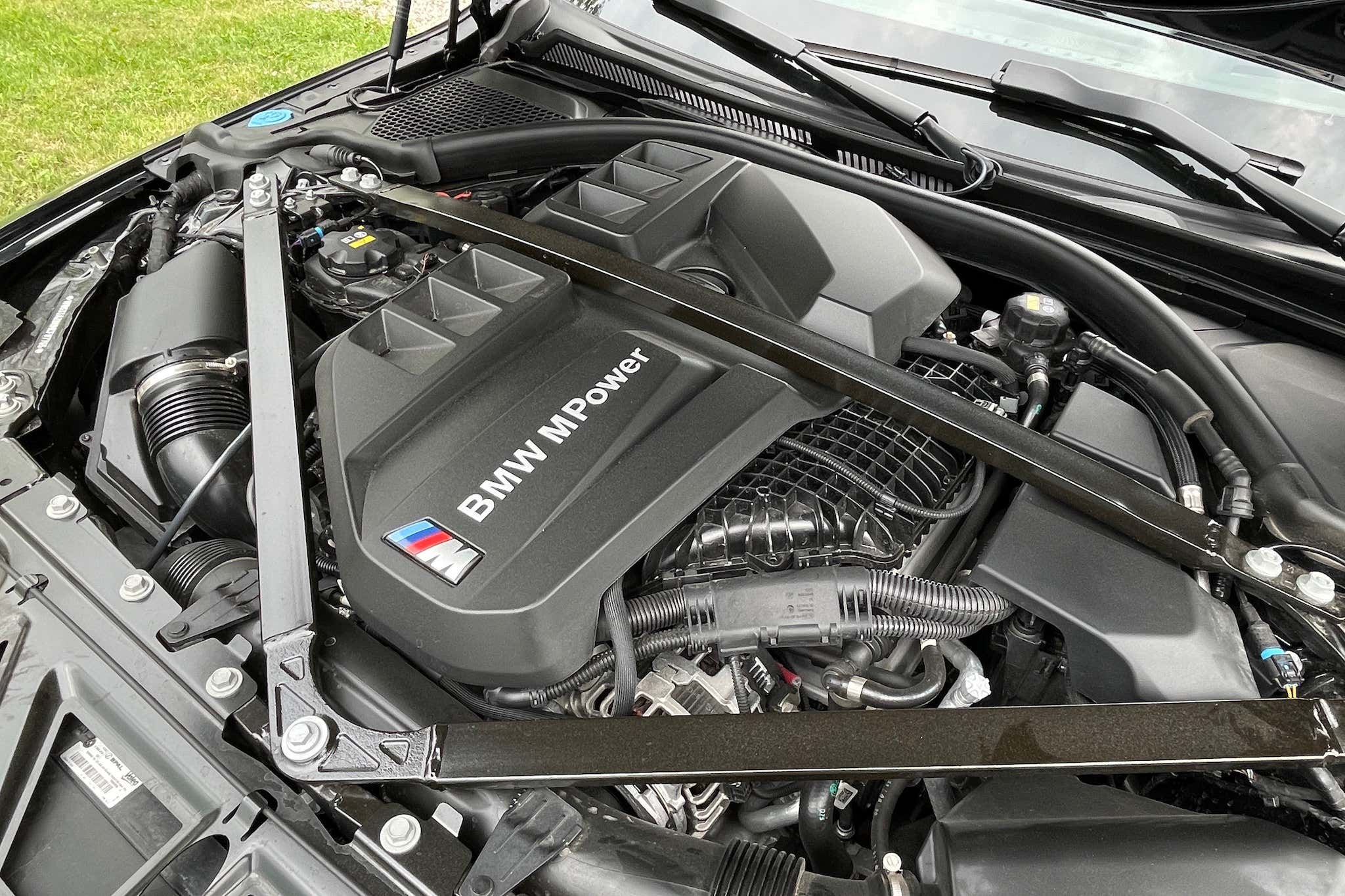 Variable-ratio steering is quick to respond, extremely accurate, and allows you to explore this car’s frankly ridiculous high-speed grip without feeling overly heavy, even in Sport mode. Everything sits on a stiffened chassis and adaptive M suspension, both of which taste fluidly unflappable. They make hypothetical adventures well into Ontario’s new definition of stunt driving feel like the M4 Competition is simply drumming its fingers.

The 503 horses and 479 pound-feet of torque are a lot but never seemed to even come close to overwhelming the rocksteady M4 Comp. When the party does get too hot, though, the brakes are similarly impressive. Strong while remaining smooth and easy to use around town, the stoppers feature six pistons up front and single pistons in the back. The calipers on this tester were also painted blue but can be had in black or red. Those front clampers are also adorned with the M logo which, as we all know, can instantly reduce a car’s 60-mph stopping distance by about five feet.

[Editor’s note: Not actually, though.] 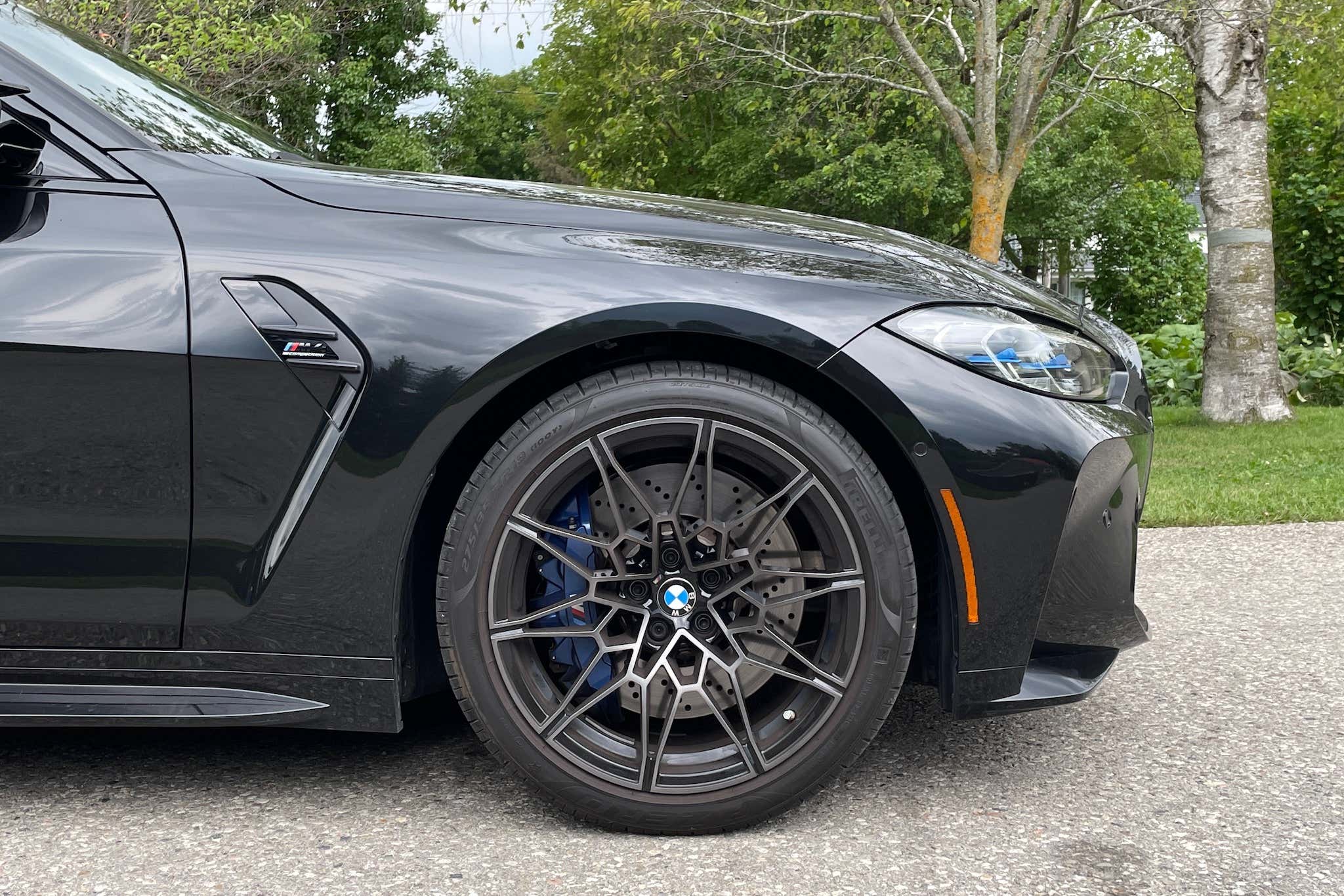 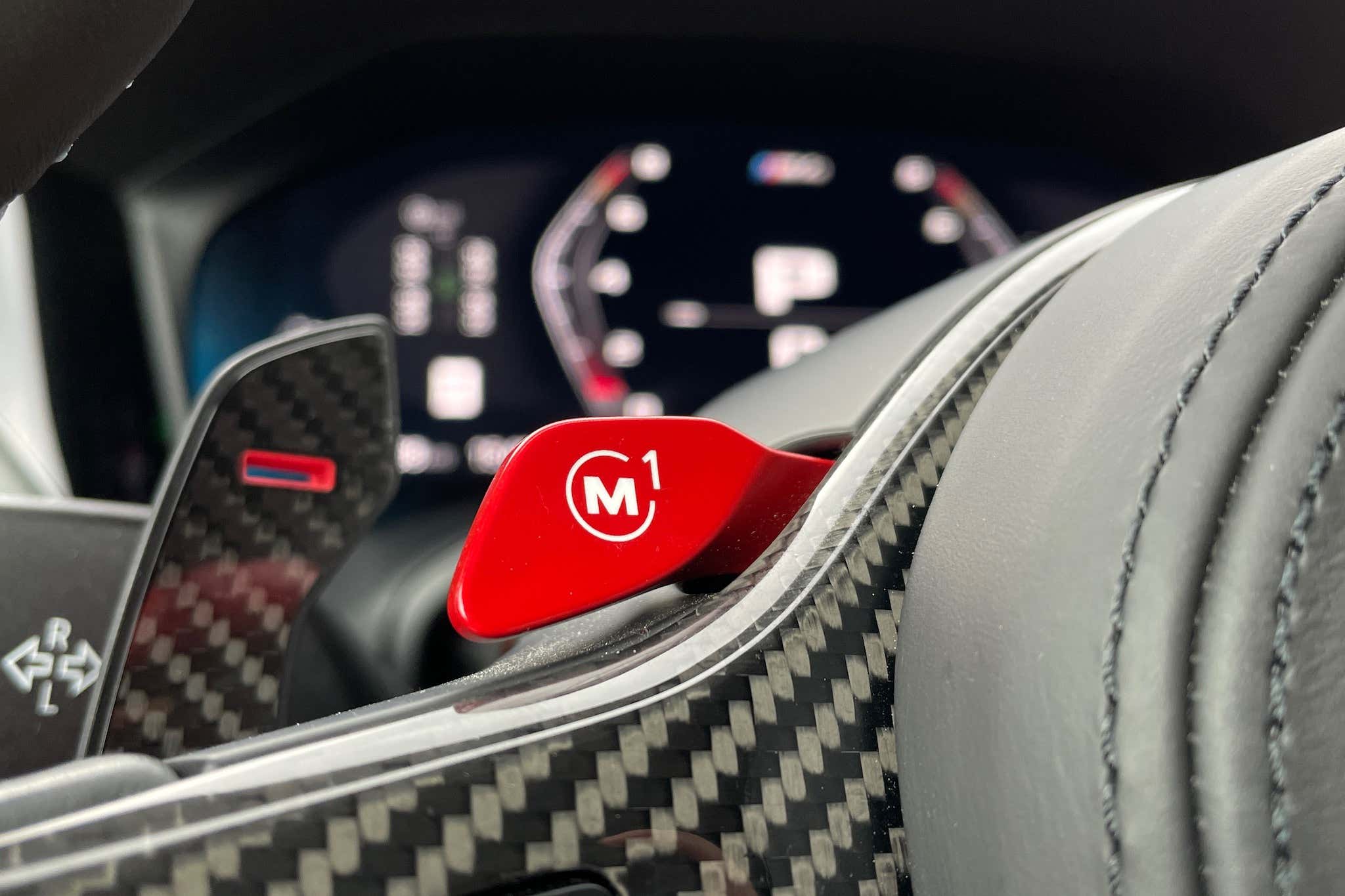 The transmission, an eight-speed torque converter automatic, moves through the cogs very smoothly, crisply, and with little driveline shock. Manual shifts via the carbon-and-red-grip paddles are swift enough but not quite as instantaneous as they perhaps ought to be in a car of this caliber. The cost of eschewing a less daily friendly dual-clutch system, I suppose.

Don’t get me wrong, though. From a purely objective standpoint, pretty much all of this car’s mechanical aspects—whether they have to do with the way it accelerates, turns, or stops—are marvelously and cohesively engineered. 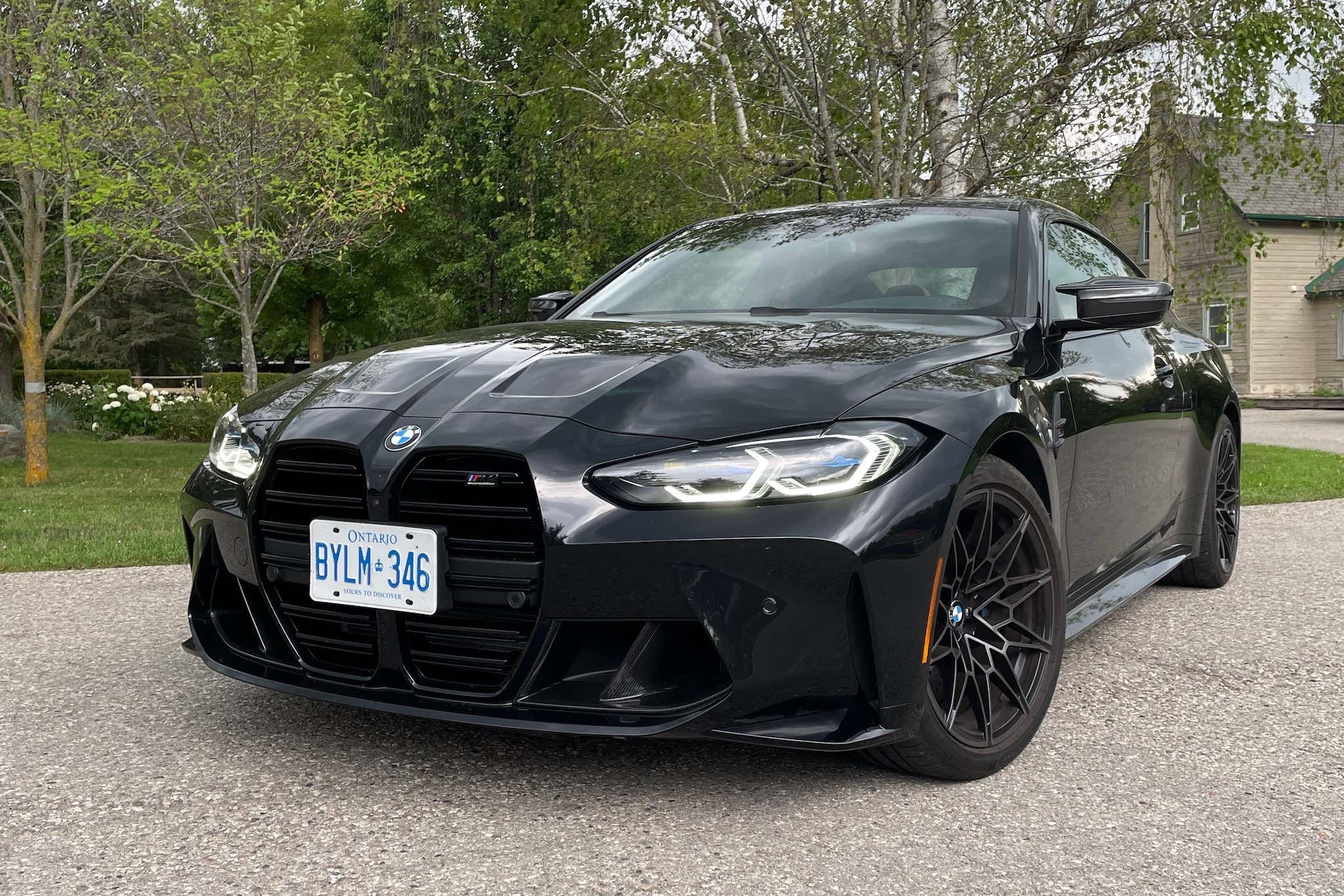 This is all well and good, of course, but making a car that’s extremely capable has never really been a problem for BMW M. Where it’s been lacking lately is in the Fun and Feel department. In the case of the G82-generation M4 Competition, I’m happy to report that the news is quite good. Piloting this car down a winding forest avenue is like operating your own personal roller coaster, where the amount you’d like to thrill or frighten yourself is controlled entirely by your own hands and feet.

At high speeds, some high-performance luxury cars make it a mission to cosset, insulate, and disguise—making 100 mph feel more like 50. Drive fast in the M4 Comp and it definitely lets you know you’re going fast. Throttle response is satisfyingly immediate, and while the turbos do take a fraction of a second to kick in at low revs, it was a trait I found only to add to a sense of theater that was missing from the last M car I drove. The M4 makes a good noise, too, emitting a bassy, cool straight-six purr that’s best described as quintessentially BMW. 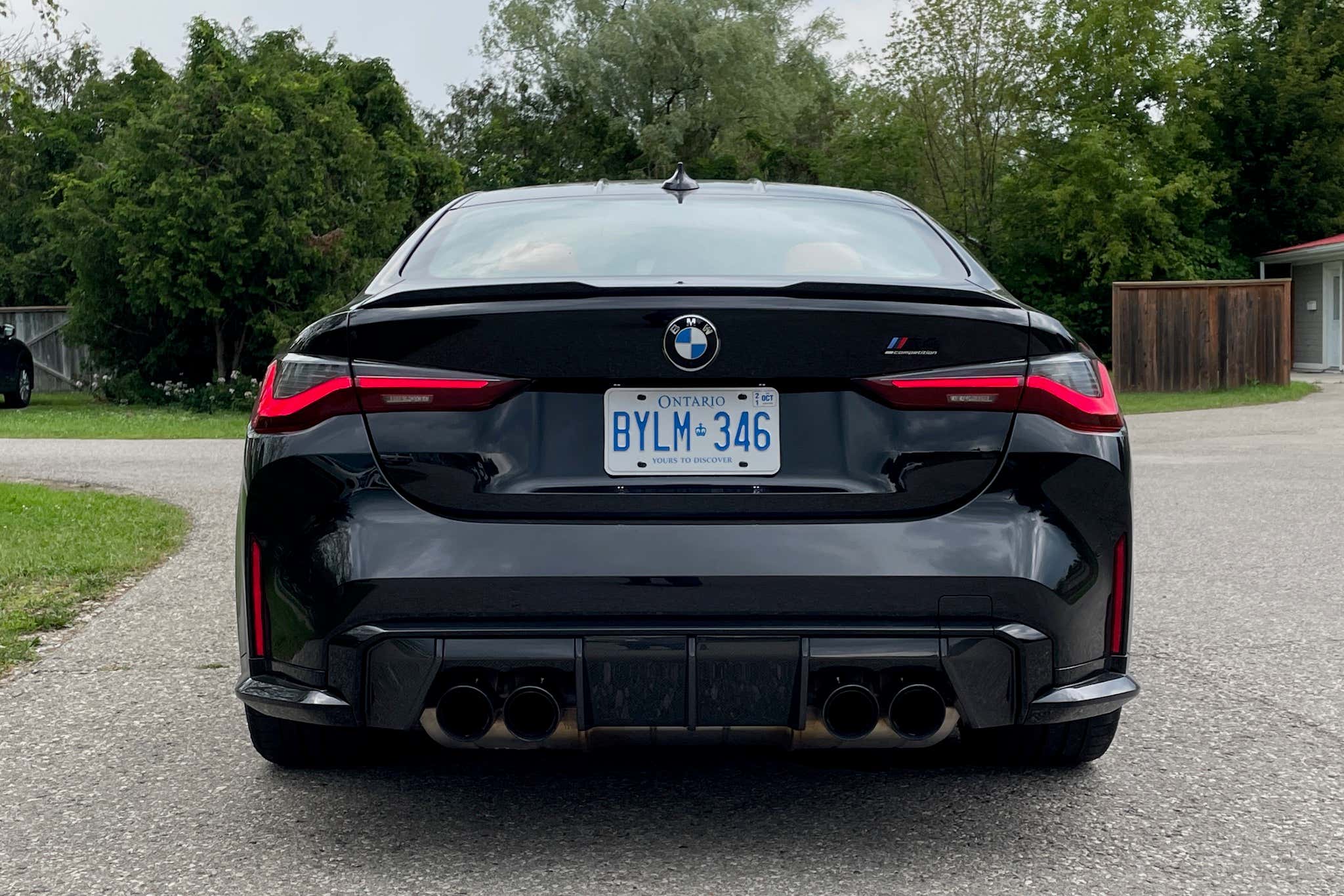 And then there’s something the automaker calls M Drift Analyzer. As part of this car’s optional M Drive Professional suite of performance-oriented onboard software, M Drift Analyzer takes into account the distance, duration, line, and angle of a slide and gives each one you perform a star rating on the 10.25-inch center touchscreen. This, ladies and gents, is an M car for the Angry Birds generation. Just as a bit of professional advice: only attempt this on a closed course. 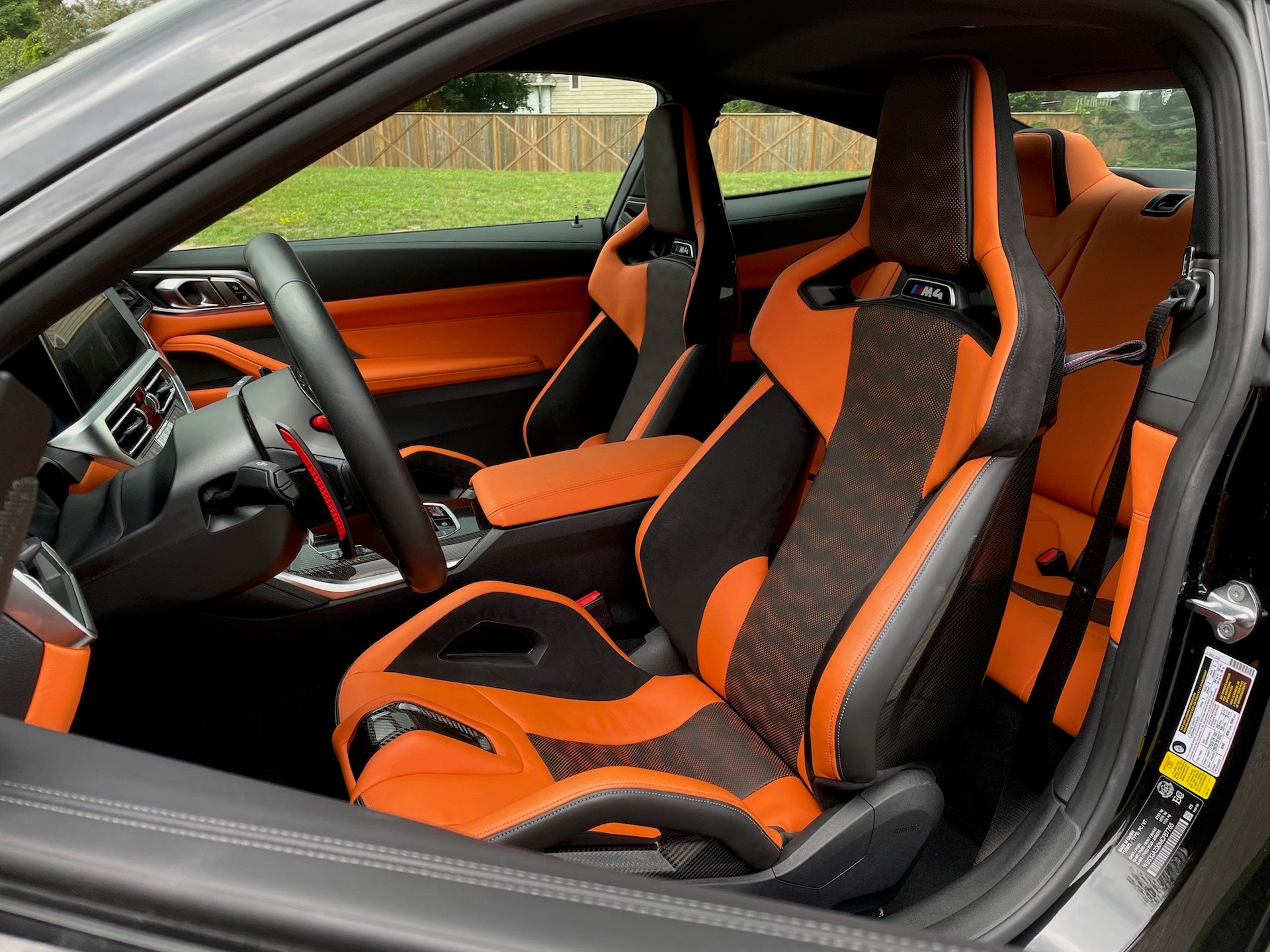 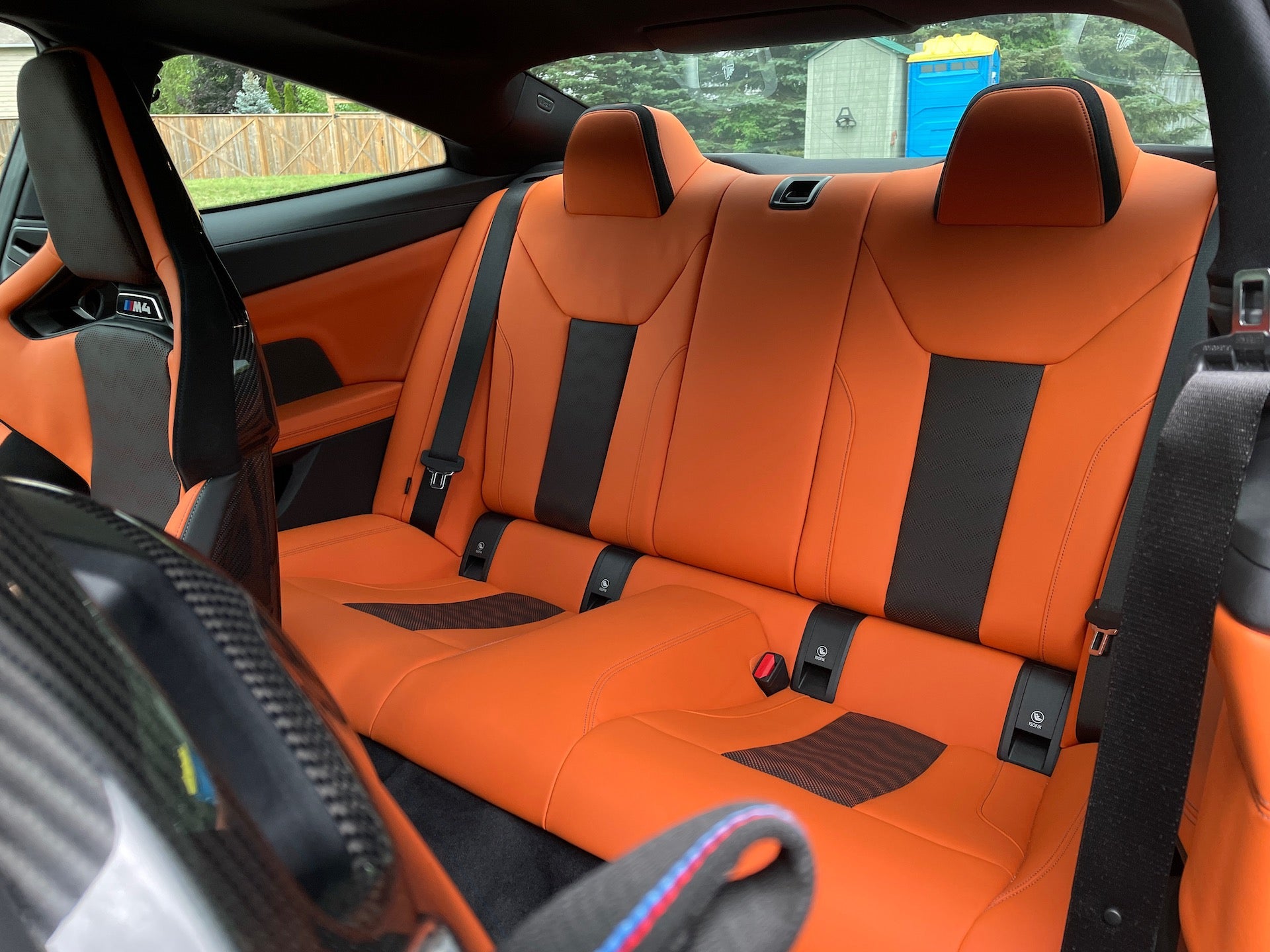 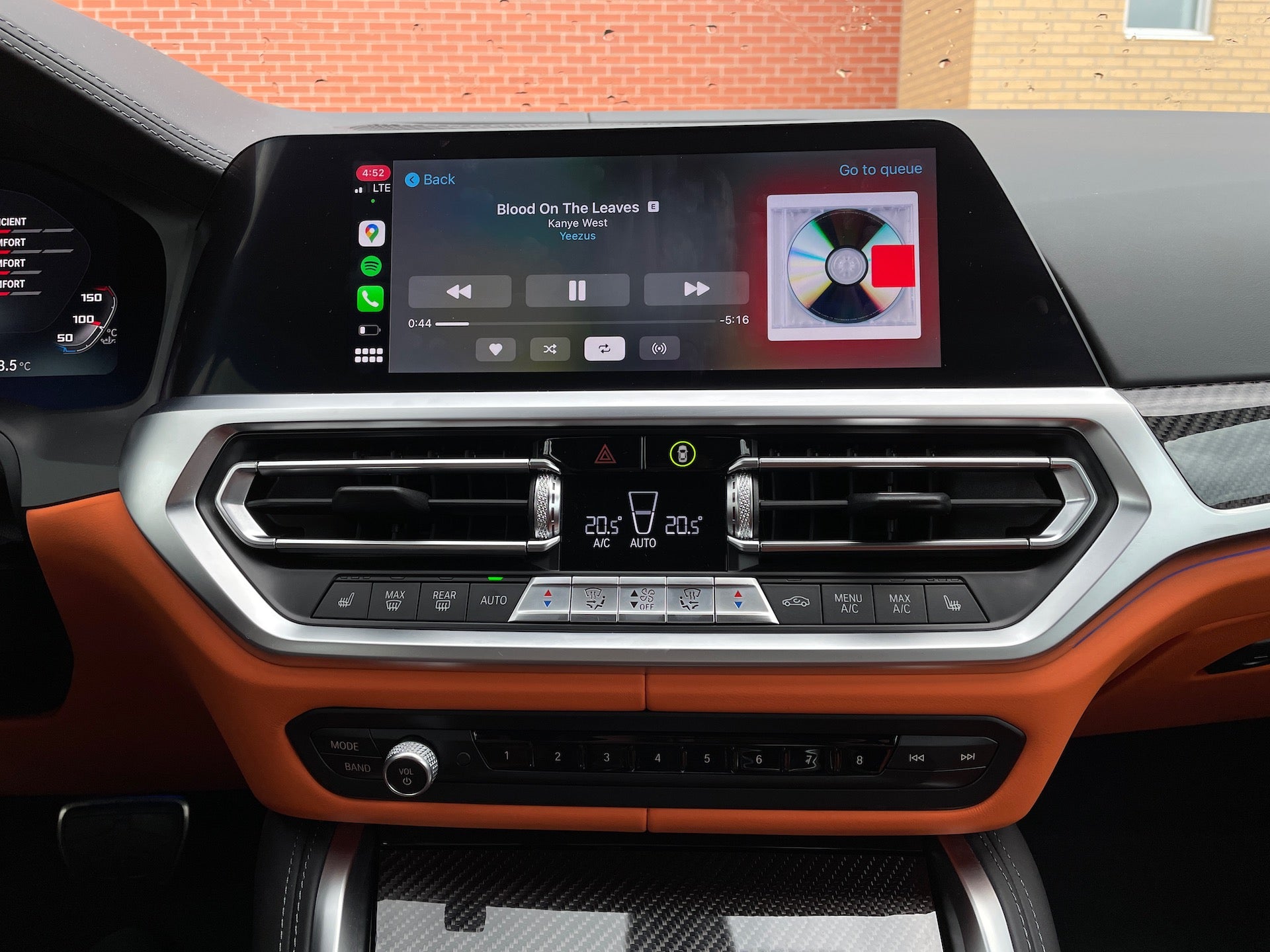 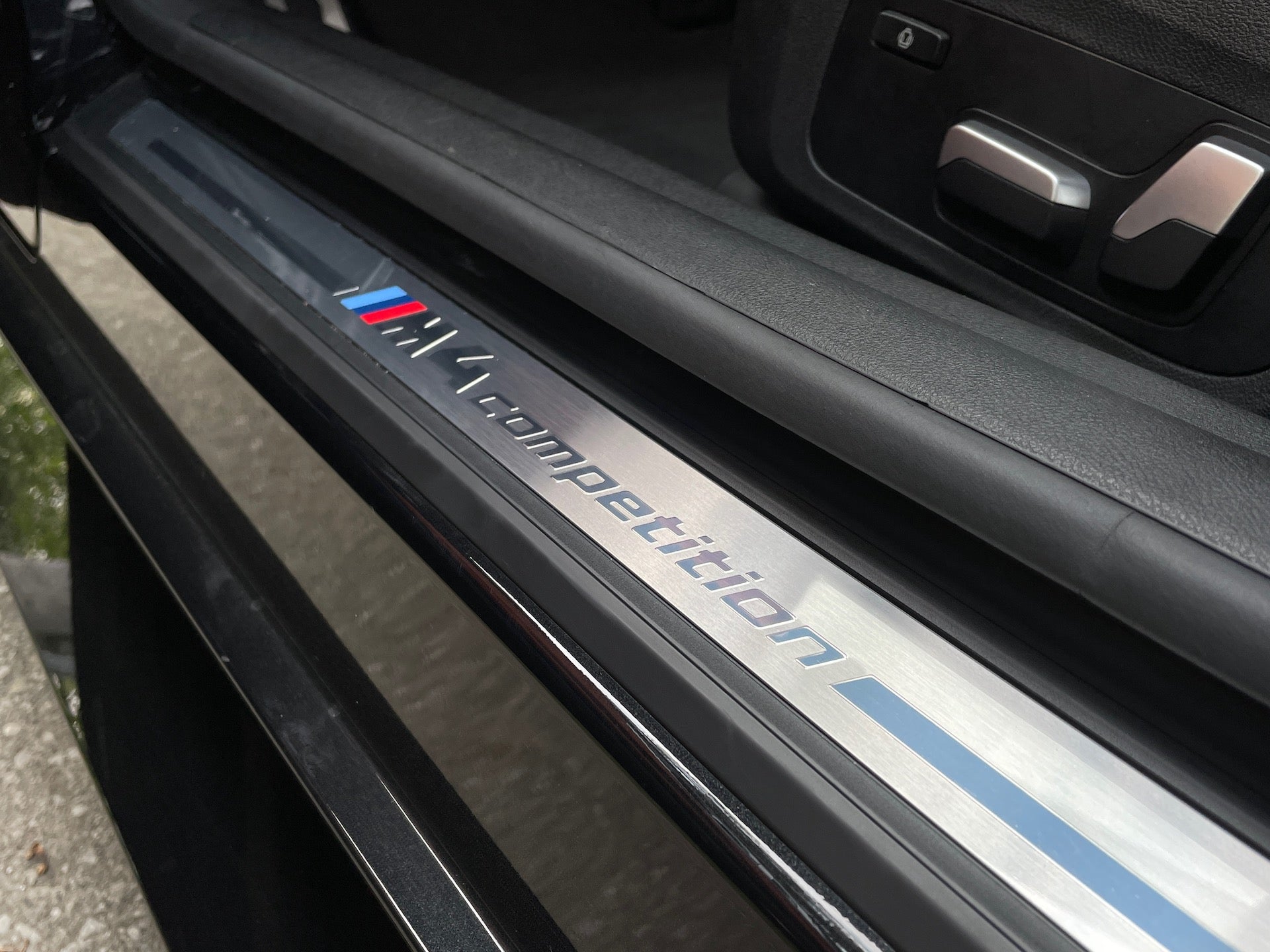 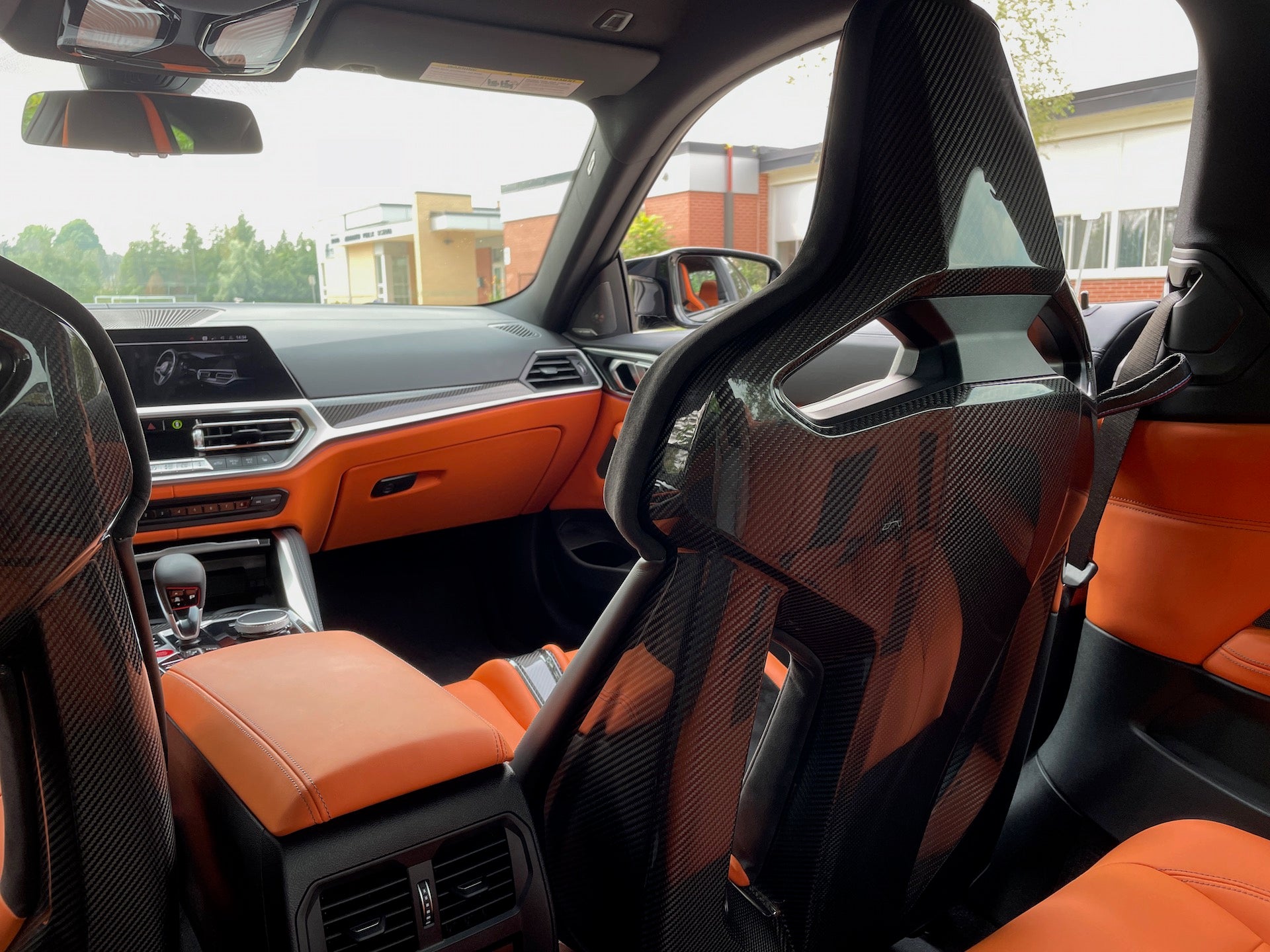 Driven with care, though, BMW’s latest two-door M is perfectly livable as a daily driver. The suspension is reasonably sprung in Comfort mode, iDrive and Harman Kardon audio are as decent as ever, and the rear passenger area behind those glorious carbon fiber front buckets is way more spacious than expected. Seriously, the amount of legroom I had sitting behind my average-height self rivaled that of some mainstream midsize sedans. Headroom, while admittedly more limited, was still workable.

Speaking of seating, opting for an M4 fitted with those carbon thrones will be A Choice. Even when pit against this particular tester’s Kyalami Orange leather, the seats here were, far and away, the biggest conversation piece of this car’s interior. Available as a $3,800 option in U.S. spec, they look super cool and do a great job of keeping you firmly in place when pulling G’s but do make everyday life a little harder in exchange. 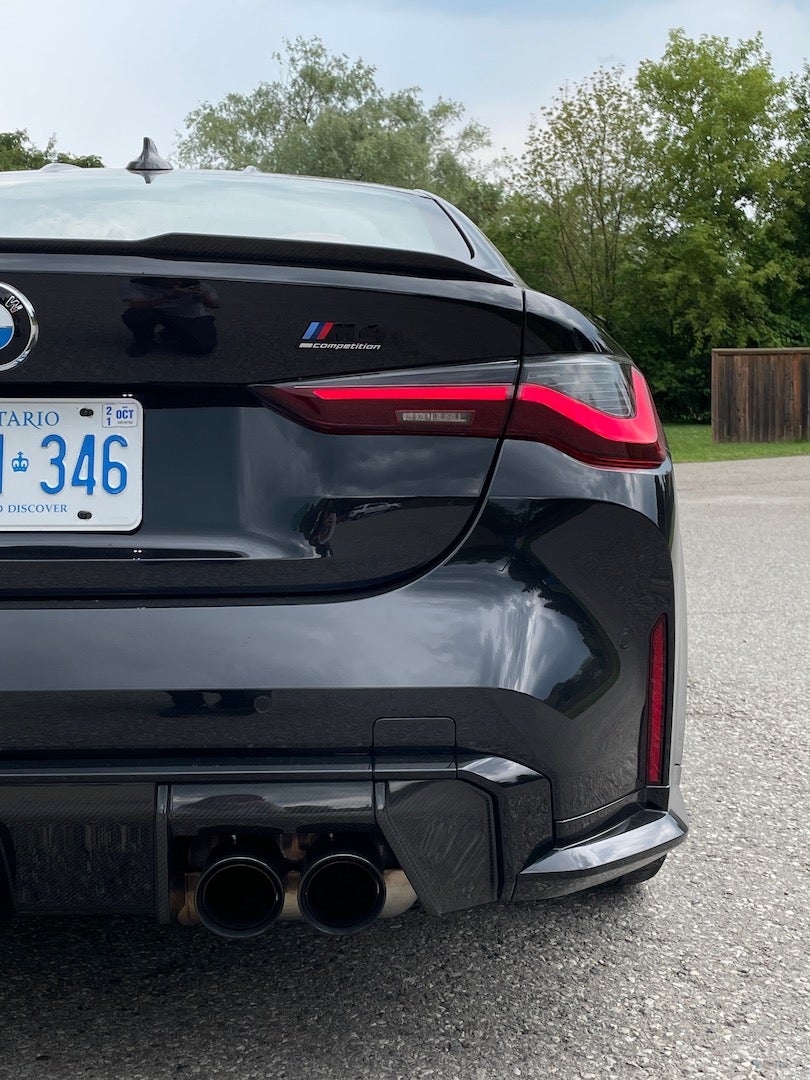 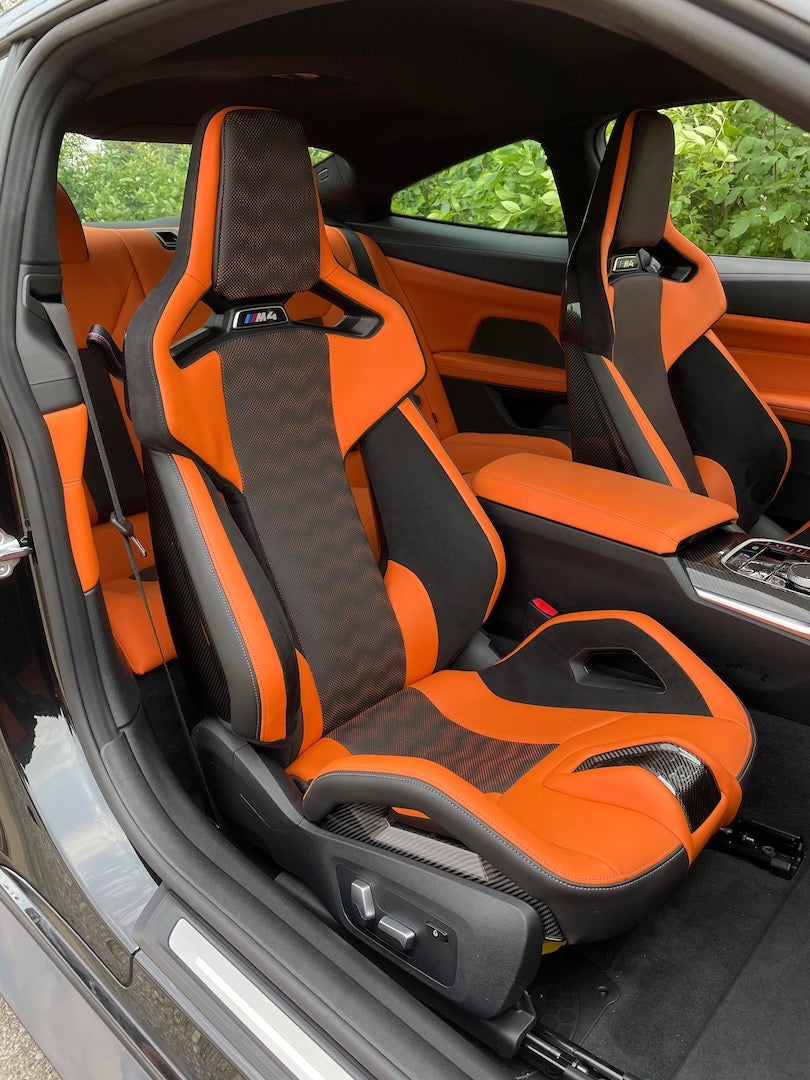 Ingress and egress involve climbing over those high leg bolsters every time, something made even more difficult by the fact that these seats do not automatically move back when the car is turned off as the powered seats in many other cars do. There’s also nothing to loop the seatbelt on, which means having to reach quite far back at the beginning of every journey.

Functionally, however, that’s about it when it comes to the drawbacks and annoyances of the new M4.

Get the M4 Out the Damn Garage

Here in Canada, the M4 Competition car starts at $89,100 CAD ($72,795 USD) and comes standard with the two-tone wheels you see here (19-inch fronts, 20-inch rears), ambient interior lighting, regular sport seats, and gloss black exterior trim. This particular tester was optioned with the $8,500 M Carbon Package that includes the cool-but-fussy bucket seats and a bunch of carbon fiber trim inside and out. 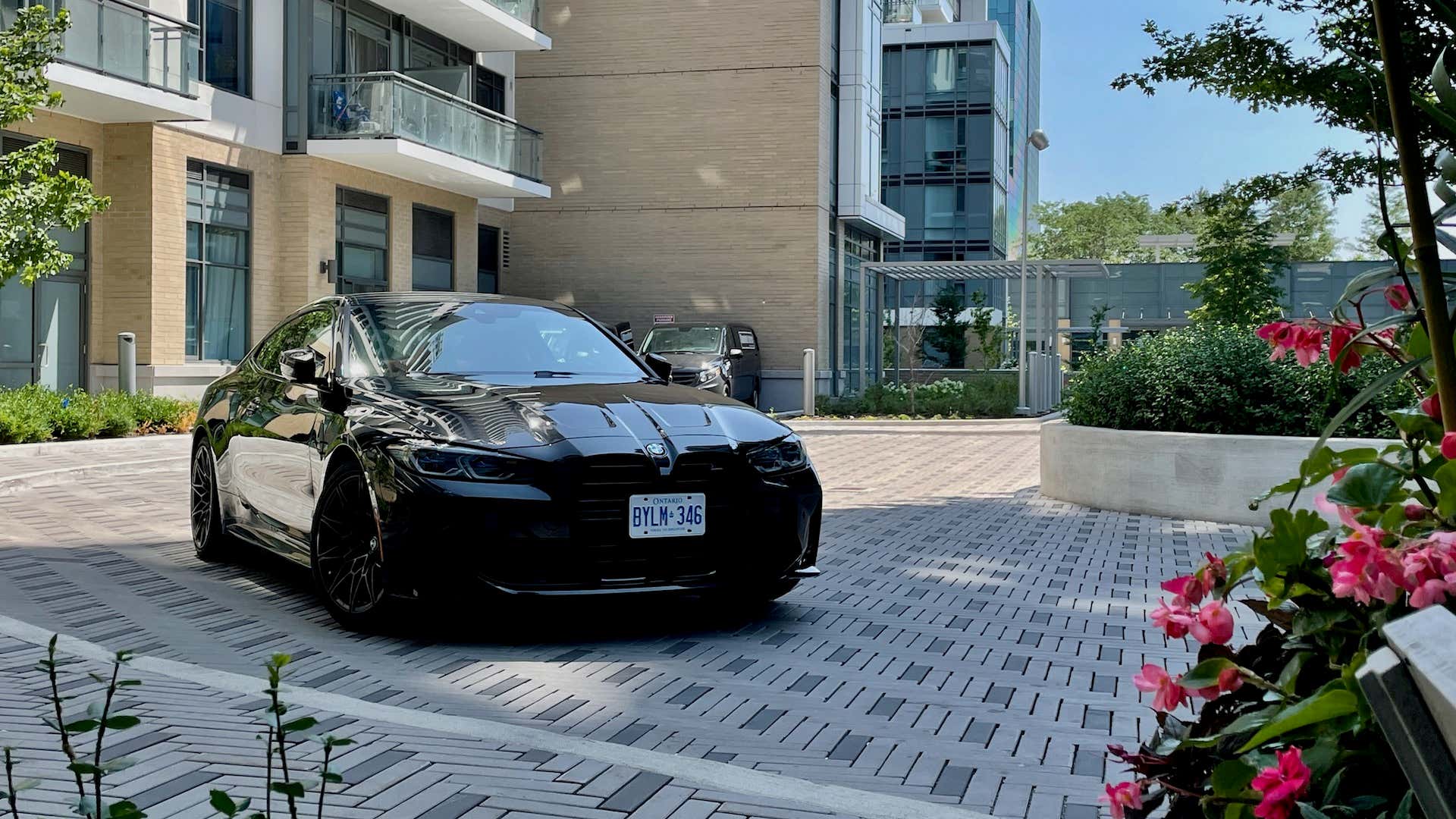 The test car also featured the $5,650 “HEA” tech package that encompasses the M Drift Analyzer, a lap timer, an automatic trunk, laser headlights, a parking assistant with surround view, a head-up display, and wireless charging. Add another $4,000 for the full orange Merino leather, $895 for the metallic black paint, and $2,480 worth of destination charges and the M4 Comp as-tested is worth $110,625. (All figures in CAD unless otherwise noted.)

Of course, for similar money, one could get an equally powerful C63 S Coupe from Mercedes-AMG or a copy of Audi’s less potent 444-hp RS5. The former also packs an admittedly more emotional V8 engine, but neither features a slightly less punchy manual version like the BMW does and are both, for what it’s worth, significantly older vehicles.

For front-end aesthetic reasons (that my editors gave explicit instructions to mention as little as possible because it’d be beating a dead horse but I’m going to bring up anyway), the 2021 M4 Competition is BMW’s Yeezus album. Its Civic Type R moment: A hotly anticipated new edition of a marquee product that was brutally, polarizingly received at first blush but, upon further inspection, turns out to be one of the best things its creator has done in recent memory. 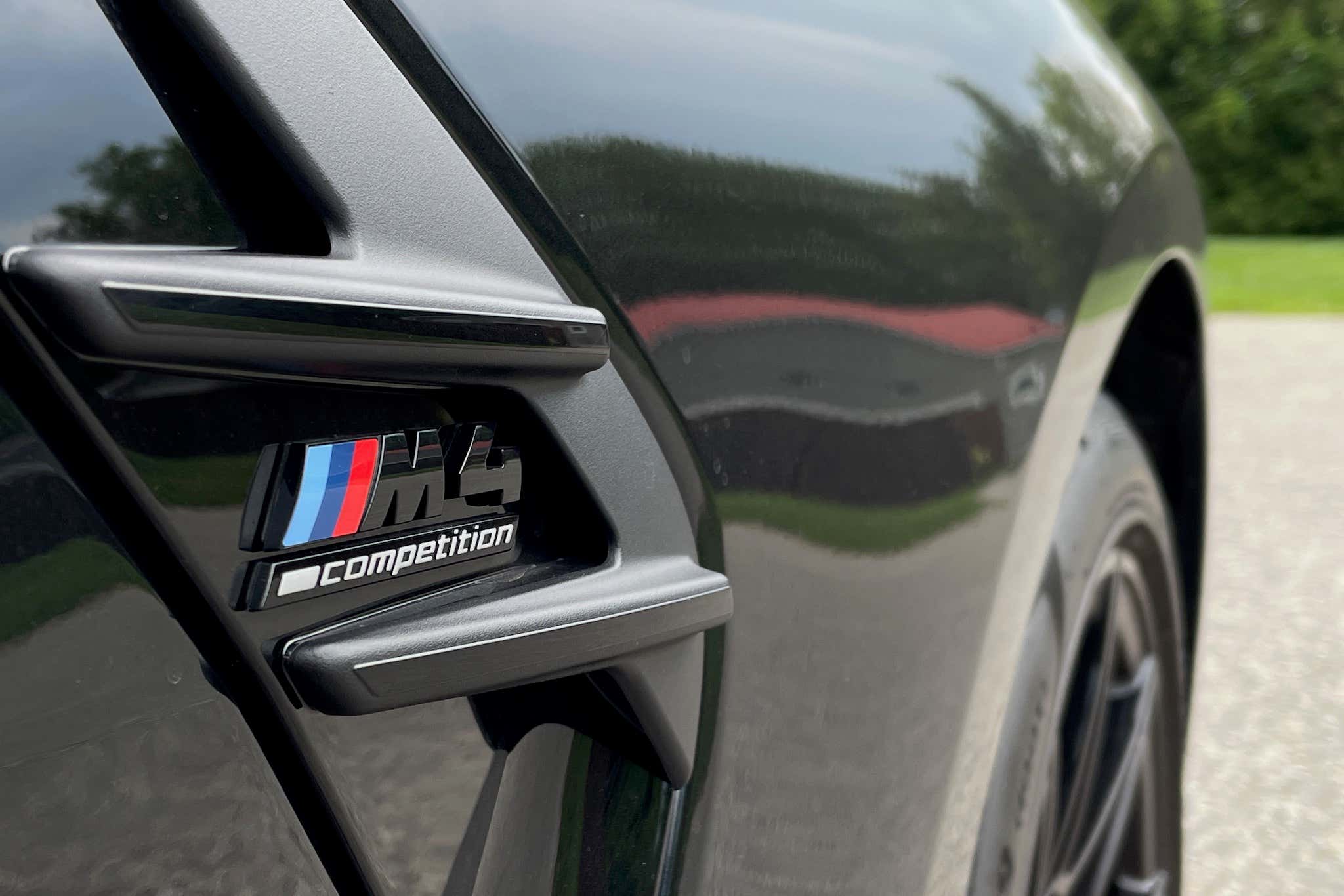 BMW’s latest Competition coupe is equal parts livable, capable, and genuinely enjoyable. It’ll comfortably cruise all day, carve up a backroad with extreme prejudice, and, thankfully, let your emotions become part of the action as well. That’s what M has always been about. Is it the most soulful thing out there? Not really, but it clearly has a sense of humor, is extremely well made, and is just one hell of a car in all of the ways that matter.

4.5 stars out of 5. You know—if we did ratings like that around here.