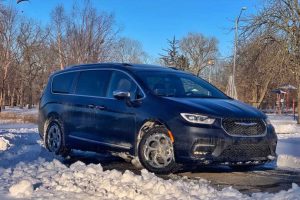 It’s no secret that minivans are frowned upon by most people. Ever since the rise of the SUV market starting in the mid-1990s, minivans and wagons have been kicked to the curb like Kid Rock albums rejected by the CD Exchange. (Do you remember any of what I just said? No? All right, then.) To this day, minivans are mostly for school pick-up lines, but that’s not to say they aren’t mighty practical vehicles for lots of different people. And in the case of the 2021 Chrysler Pacifica Hybrid, you get a surprising amount of style and fuel-efficiency, too.

I recently drove Chrysler’s latest and most advanced minivan (although not its fanciest and most expensive—that’s the non-hybrid Pinnacle trim) but my time was sort of cut short due to a heavy snowstorm that brought most of the midwest to a standstill for several days. And since both my wife and I work from home and our only ventures into the real world are for driving our kid to school, the Pacifica was forced to sit out a few days buried in fresh powder. 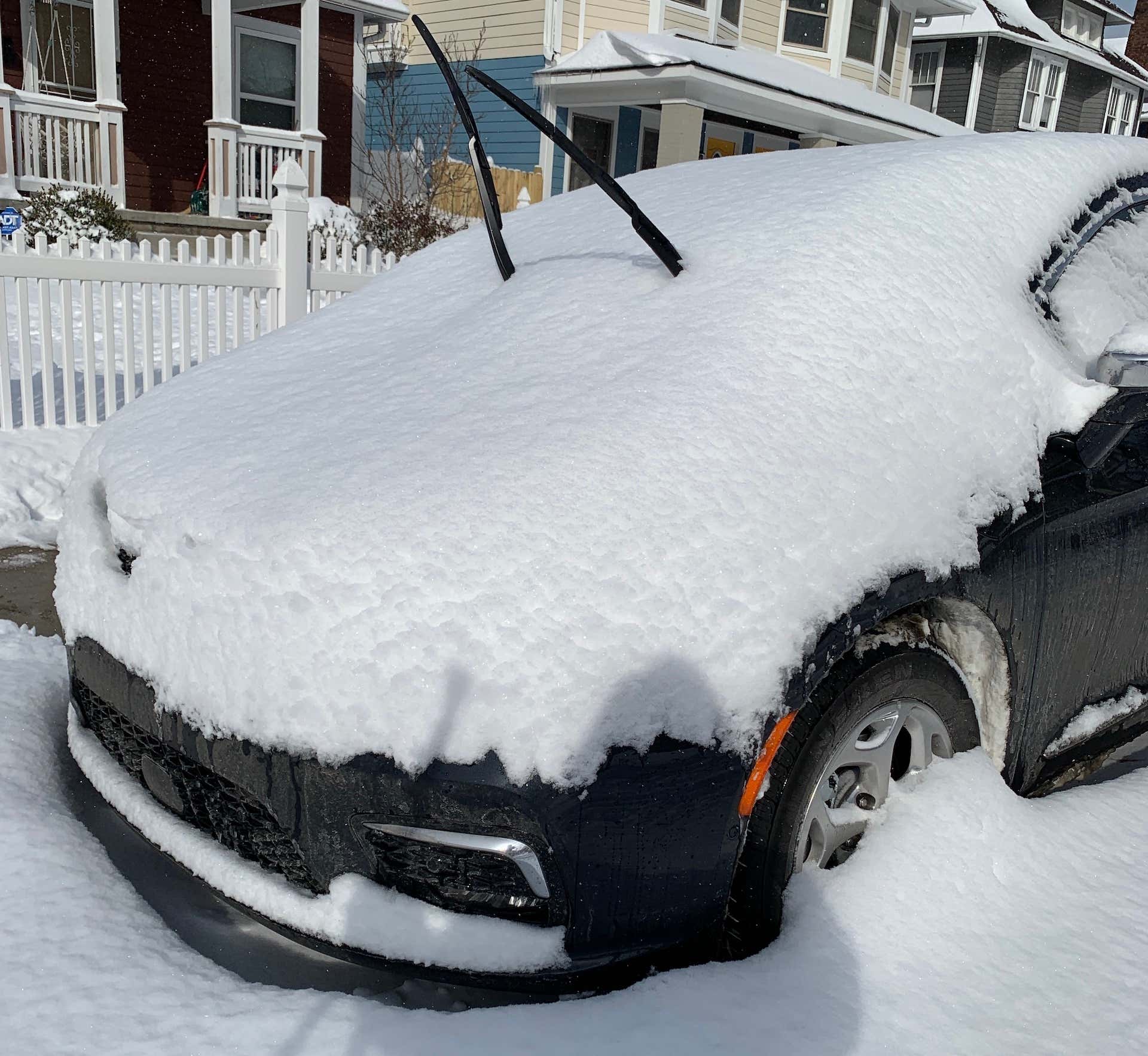 Despite my relatively brief experience with it, the Pacifica reminded me of my teenage years commuting in my stepmom’s Honda Odyssey, which served as a school bus, marching band bus, and even makeshift pickup truck when large items needed to be hauled to or from the house. Now in my mid-30s with a family of my own, I used the Pacifica to transport my two big-ass dogs to the park, take some extra-large boxes to the city dumpster, and quite unexpectedly, ford through a foot of snow courtesy of Indianapolis’s unplowed roads. It turns out you don’t need an SUV to do all that, despite what the car commercials would have you believe.

The 2021 Chrysler Pacifica Hybrid Limited, By the Numbers

Unlike SUVs and crossovers, minivans have never really suffered from an identity crisis, and that holds true to this day. The recipe is simple: a spacious interior, sliding doors, folding seats, and lots of cupholders. Perhaps the closest the minivan’s been to undergoing a revolution is the standardization of techy features like power outlets, screens, vacuums, glass roofs, and other gadgetry to make parents’ lives more bearable on the road. And of course, the plug-in hybrid Pacifica doesn’t cut corners with any of these.

The Chrysler brand these days is just the aging 300 (yes, they still make that), the Pacifica minivan and its downscale brother, now called the Chrysler Voyager. That’s admittedly strange, but the truth is the Pacifica is an unusual and unexpected brand flagship—still a car that does certain things better than just about anything else. 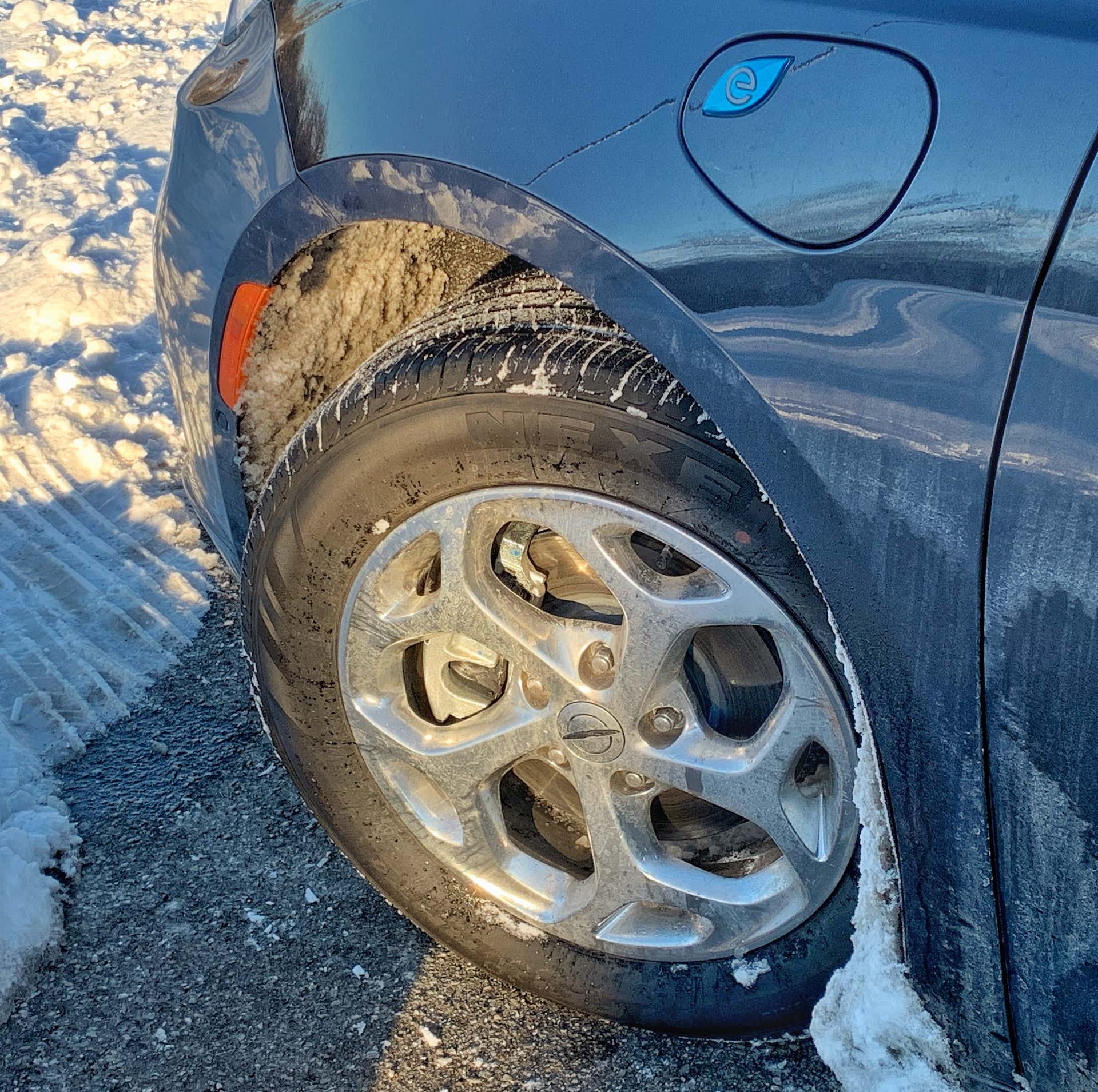 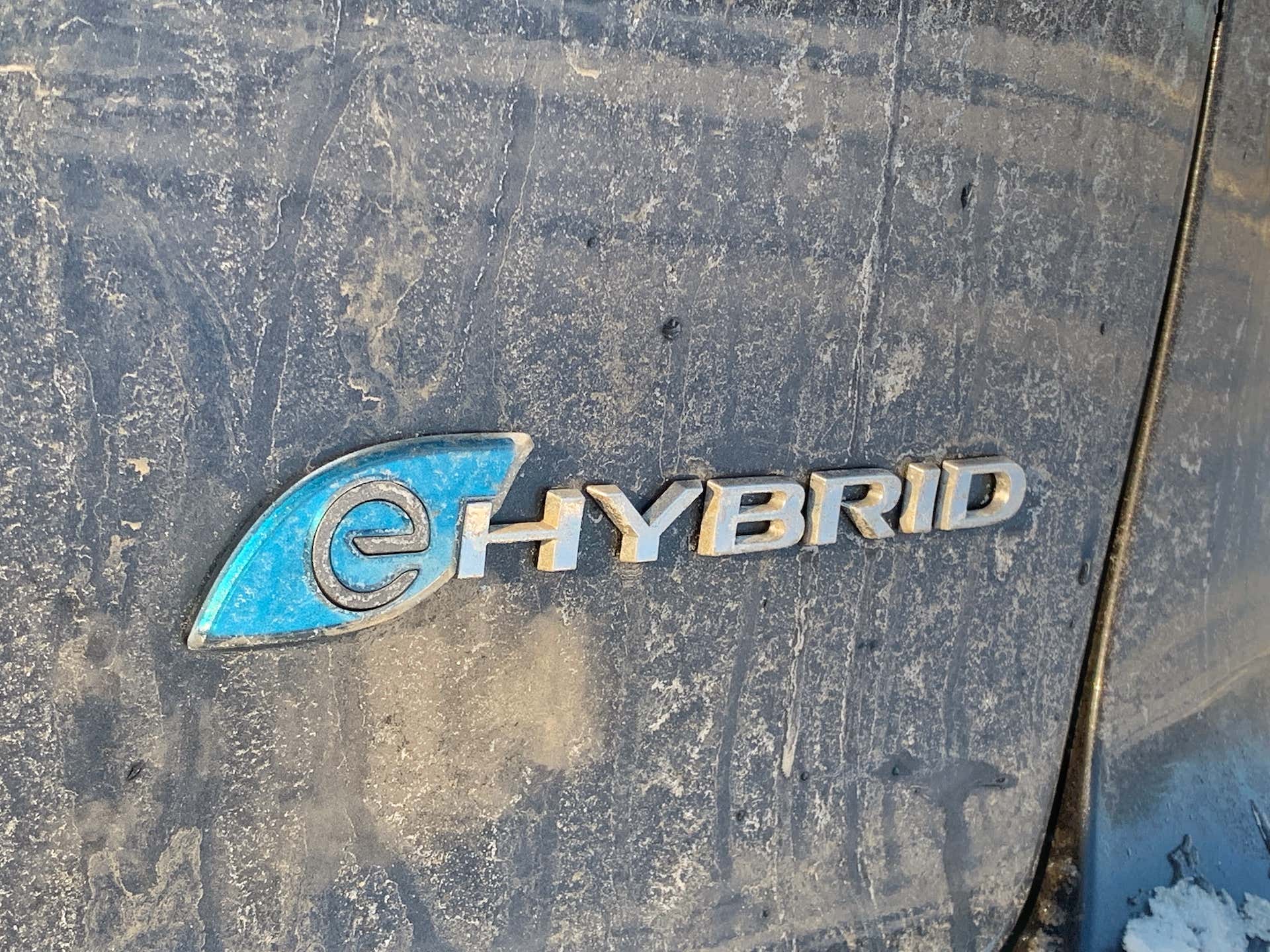 Things haven’t changed a whole lot since we last reviewed the Pacifica Hybrid two years ago, with most model-year updates since focusing on styling tweaks and tech/safety features. It still offers seating for seven or eight depending on configuration (second-row captain chairs versus bench seat), two power sliding doors with fully functional windows on each side, and a folding third-row that disappears into the trunk to create a flat load floor.

Sadly, the hybrid variant doesn’t offer the clever Stow ‘n Go system because that’s where the drivetrain batteries are stored. Since those seats are a “killer app” for many buyers in the minivan game, that’s definitely something to consider if you’re weighing a Hybrid or a standard Pacifica.

This year, updates include a fresh front fascia with a new bumper, grille, headlights, and foglights, while the rear gets a new elongated (and quite cool) taillight that stretches across the entire liftgate. The end result is a positive one, making the Pacifica look less Magic School Bus and more VIP shuttle van; if that makes any sense.

Inside, the cabin mostly remains the same, with the most noteworthy change being the all-new Uconnect 5 infotainment system and its 10.1-inch touchscreen. Uconnect has been a long-time favorite of mine, proving to be easy to understand, easy to use, and in my experience, speedy and reliable. My first experience with Uconnect 5, however, was kind of a mixed bag. 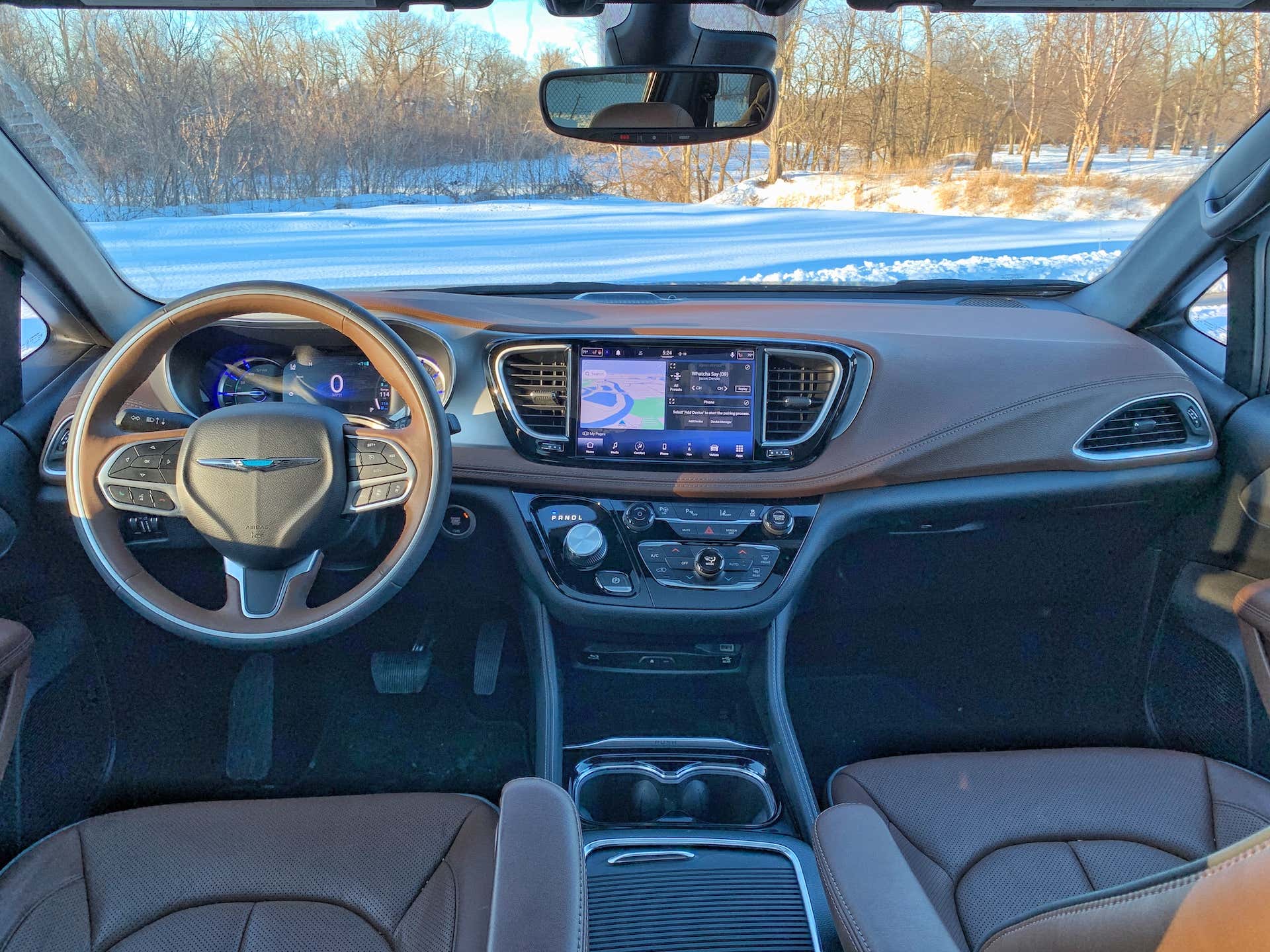 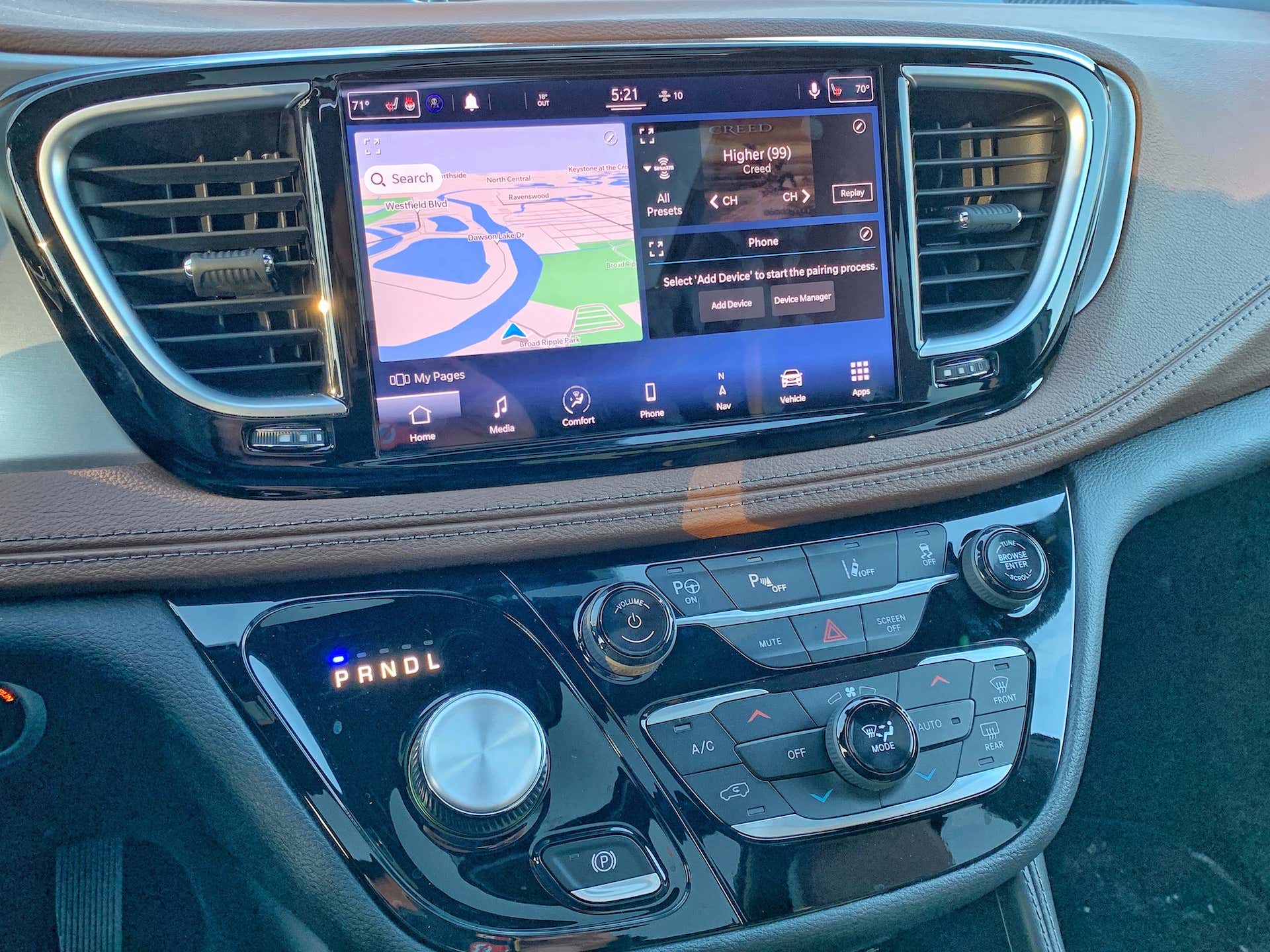 The system retains the basic premise at its core: a page with multiple icons that you can drag and drop to organize them based on your personal preference. That being said, I found the icons to be small and hard to identify—definitely smaller than on previous versions of Uconnect—and the screen not as responsive as before. For example, when rushing to turn on the heated seats, the delay in response would make me click more than once, only for the second tap to then cycle me through the different levels of heating. It definitely required some patience.

There were some positives, however, such as the ability to have a Favorites page always be the go-to page on the infotainment screen, as well six user profiles that store everything from favorite seat and mirror position, radio favorites, icon layout, etc. New USB-C ports also make an appearance in 2021, promising charging rates four times faster than regular ones, while still retaining several of the traditional USB units. That brings the grand total to 12 combined charging ports throughout the cabin.

There’s also a new “FamCam,” which is essentially a ceiling-mounted camera that allows you to see what the kiddos in the second and third rows are up to via the center screen. For what it’s worth, it’s a direct copy of the “CabinWatch” system Honda launched in the Odyssey a few years ago—much like the Stow ‘n Vac built-in vacuum. 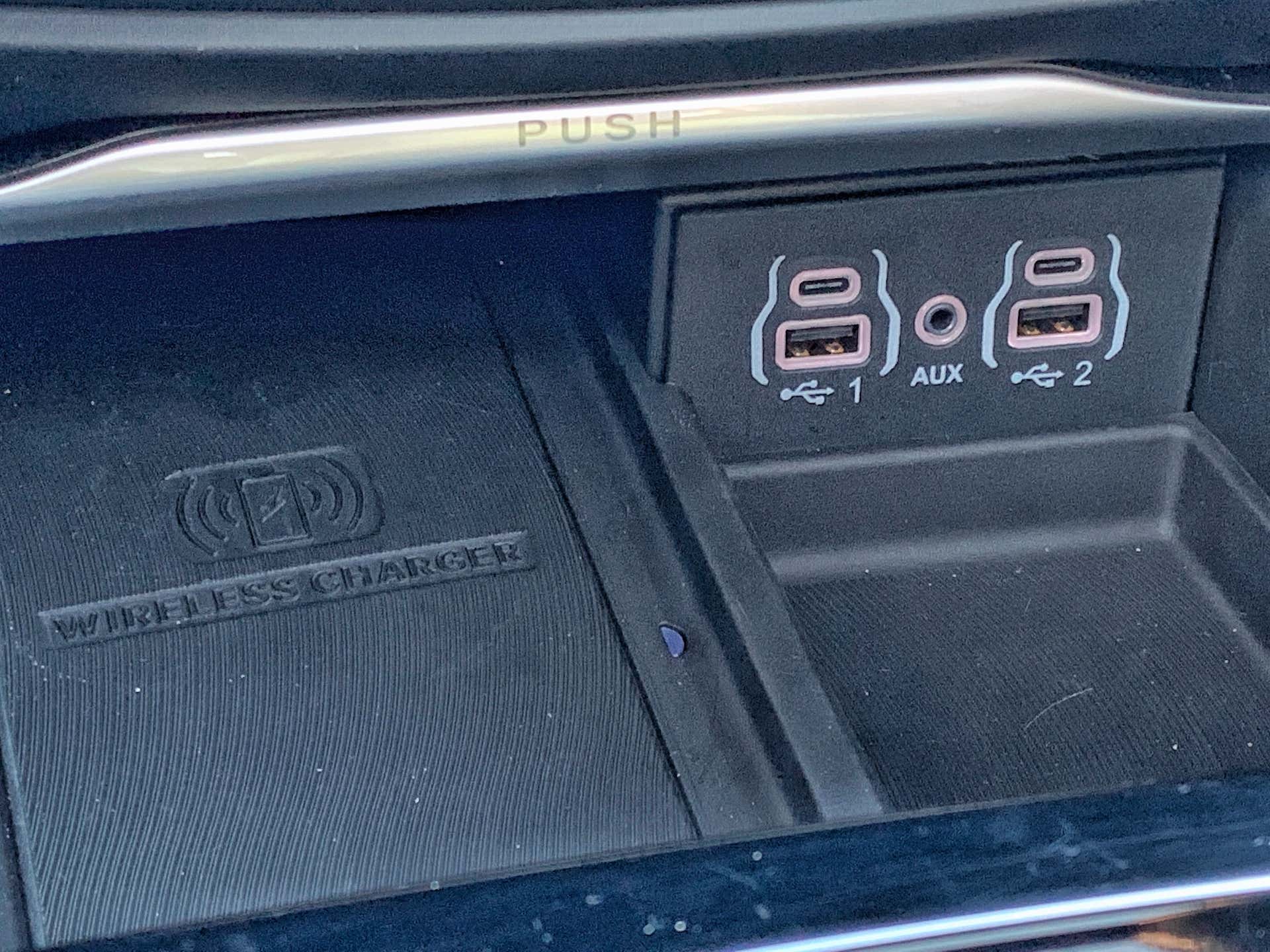 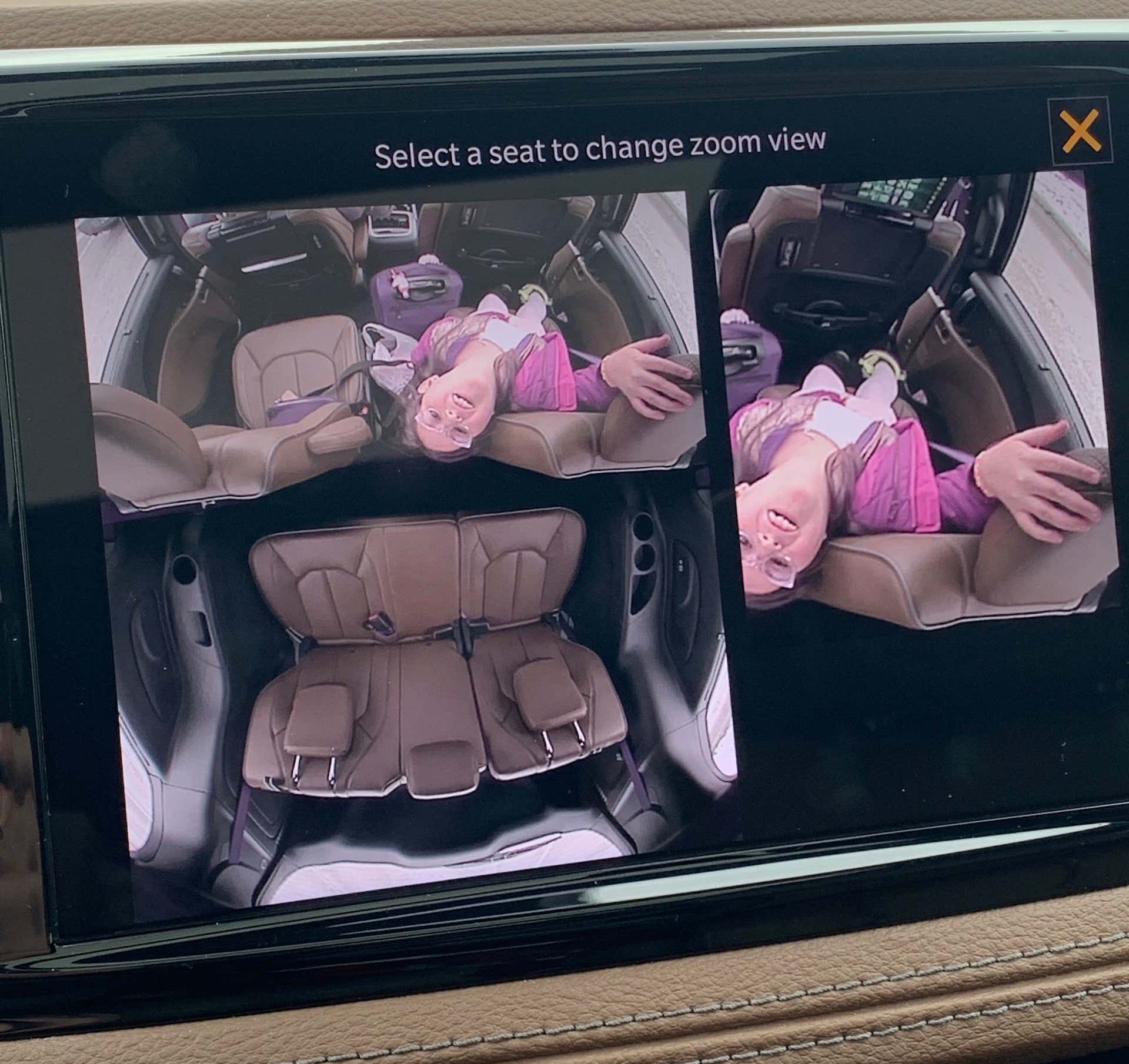 Back in 2017, I drove a Pacifica from Indianapolis to San Antonio, Texas, confirming along the way that it was the smoothest, swankiest minivan money could buy at the time. It’s a similar story nowadays, but the ride quality and overall comfort are considerably better in the hybrid.

Upfront there’s an independent MacPherson strut suspension and traditional coil springs in the back, which are calibrated to harmoniously support the 5,000-pound minivan through whatever the road throws at it. Whether you’re behind the wheel or in the back, the Pacifica feels soft without being springy or bouncy. An extra 500 pounds of weight is what the hybrid model has to carry compared to the non-hybrid, but because all of that weight is located in the floor or directly over the front axle, it actually makes the hybrid feel stouter at the wheel. 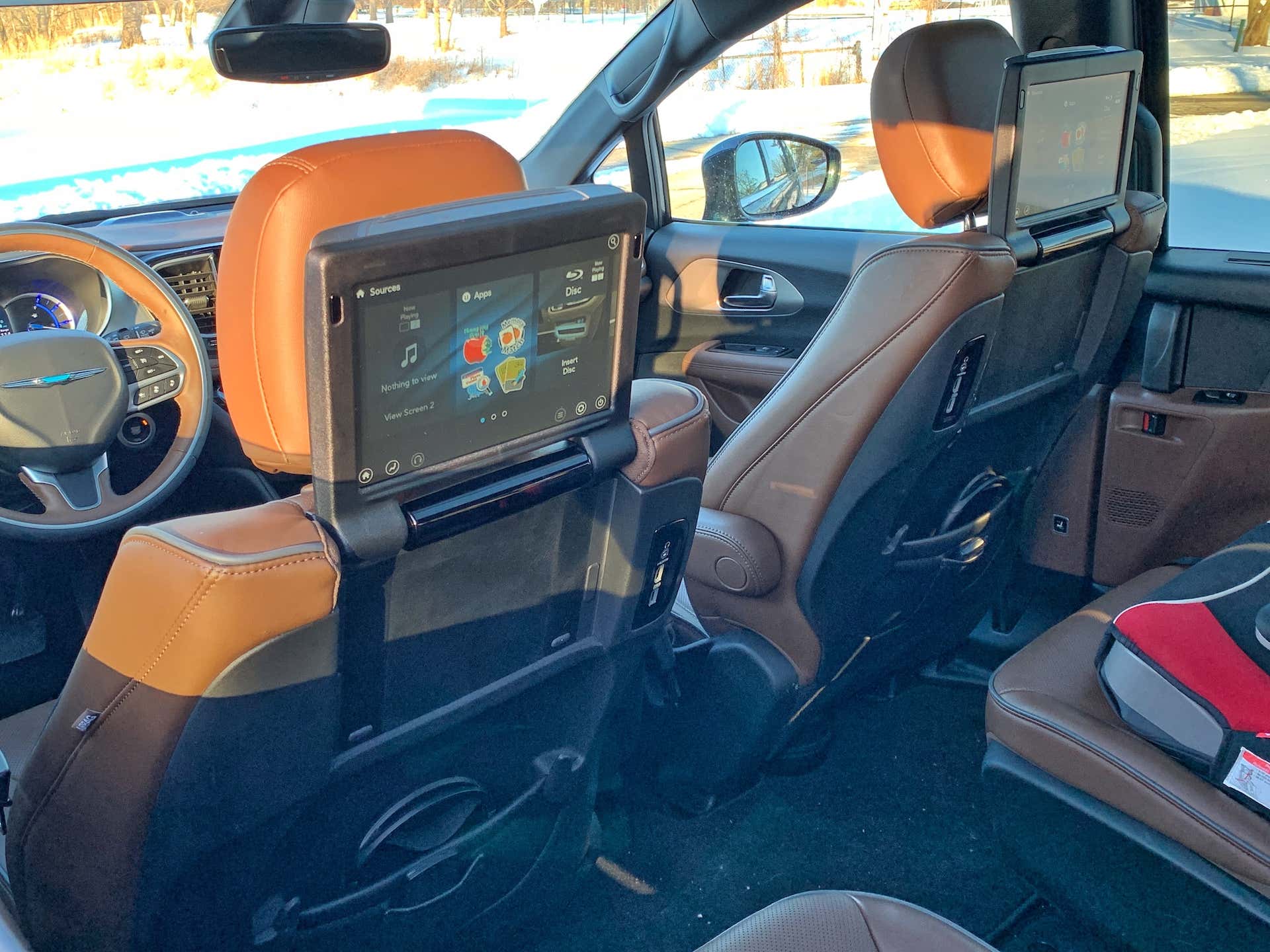 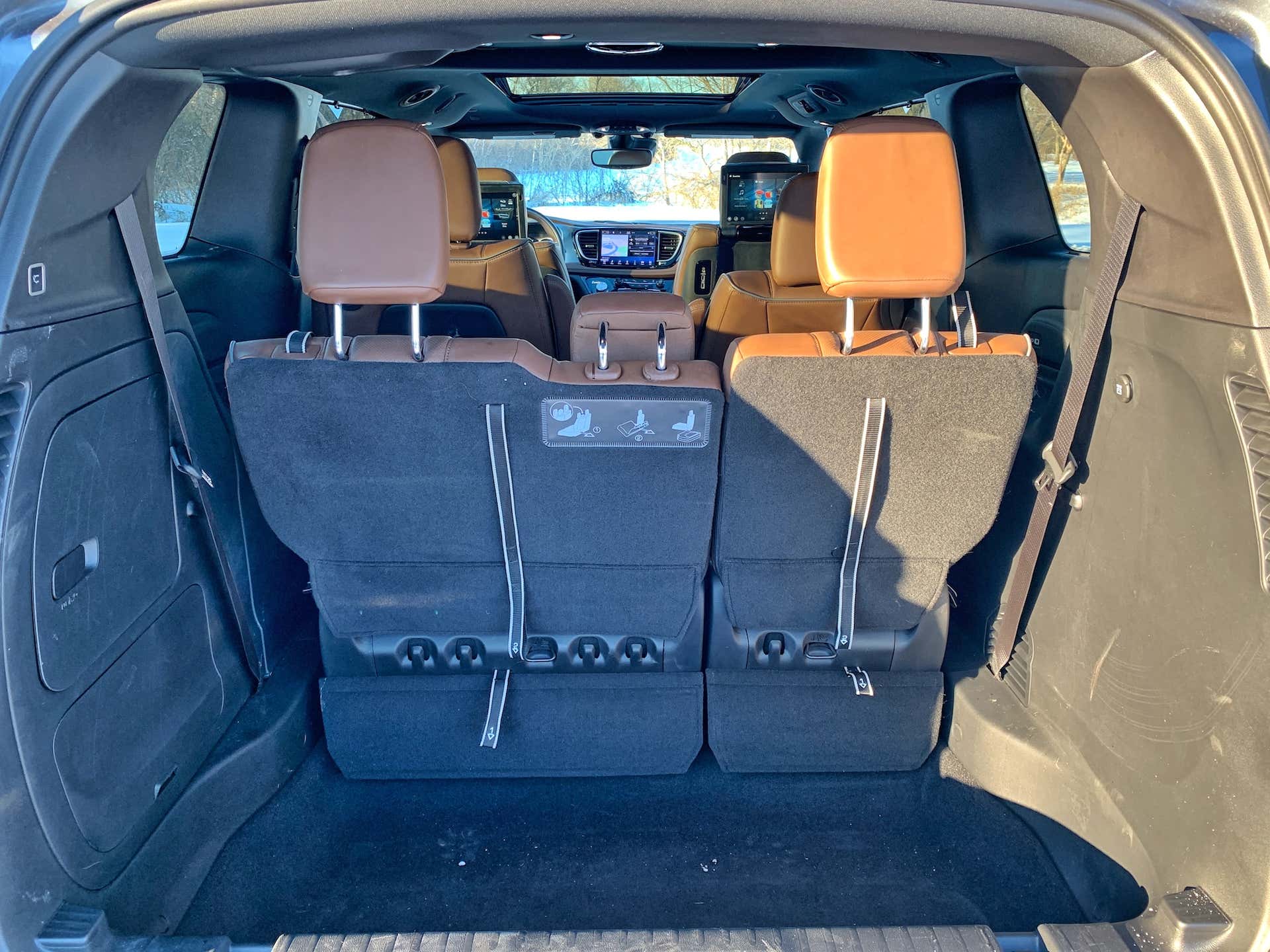 As with most hybrid cars, acceleration is ample, though the engine whine is a definite turn-off. Still, who buys a minivan purely for the sound? No one. Regenerative braking feels natural and you almost don’t even know it’s working hard to recoup some energy. Should you choose to plug into the grid and charge up the 16kWh battery, you’ll be able to go 30 miles without using a drop of fuel, according to Chrysler. I had originally planned on testing this, but the weather-related closures and sub-zero temperatures got in the way.

Sadly, the Pacifica Hybrid is only offered with front-wheel-drive, unlike the all-wheel-drive 2021 Toyota Sienna Hybrid that we recently tested. Still, even when faced with deep snow in unplowed streets, the trusty ‘Cifica (or is it Paci?) carried on like a champ, using its low-end electric torque to keep the wheels going despite the lack of grip. When the going got tough, I had to turn off traction control to keep the tires from bogging down, but I really only had to do that after my on-street parking spot was boxed in by snow.

I was rather impressed by how effortlessly it navigated snowy roads (on all-season rubber), and by how well the traction control system worked in conjunction with the hybrid powertrain. Taking off from a standstill, it managed the front axle so well that I could’ve sworn it was sending some power to the rear wheels. Pacifica Snow Goat. 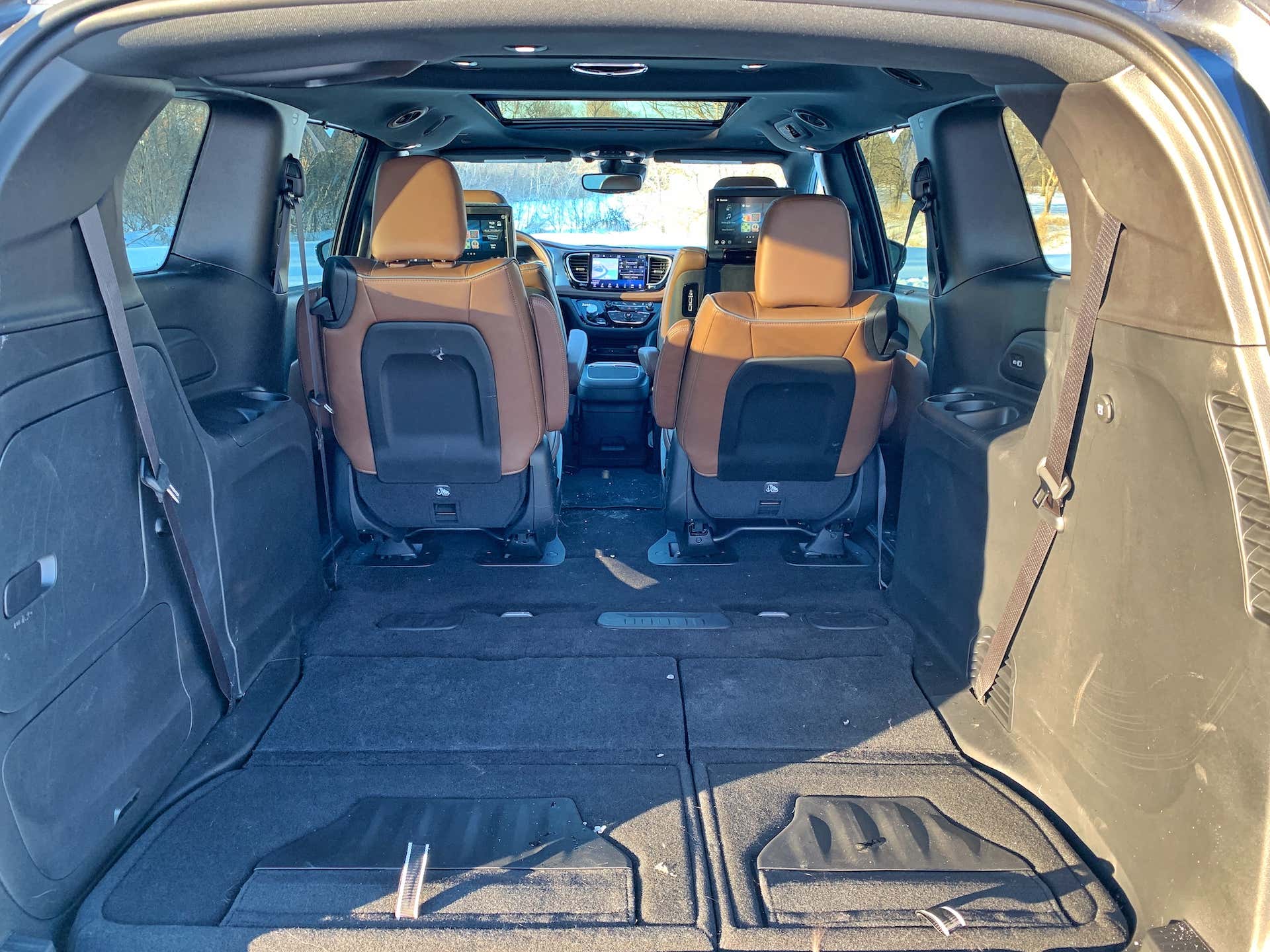 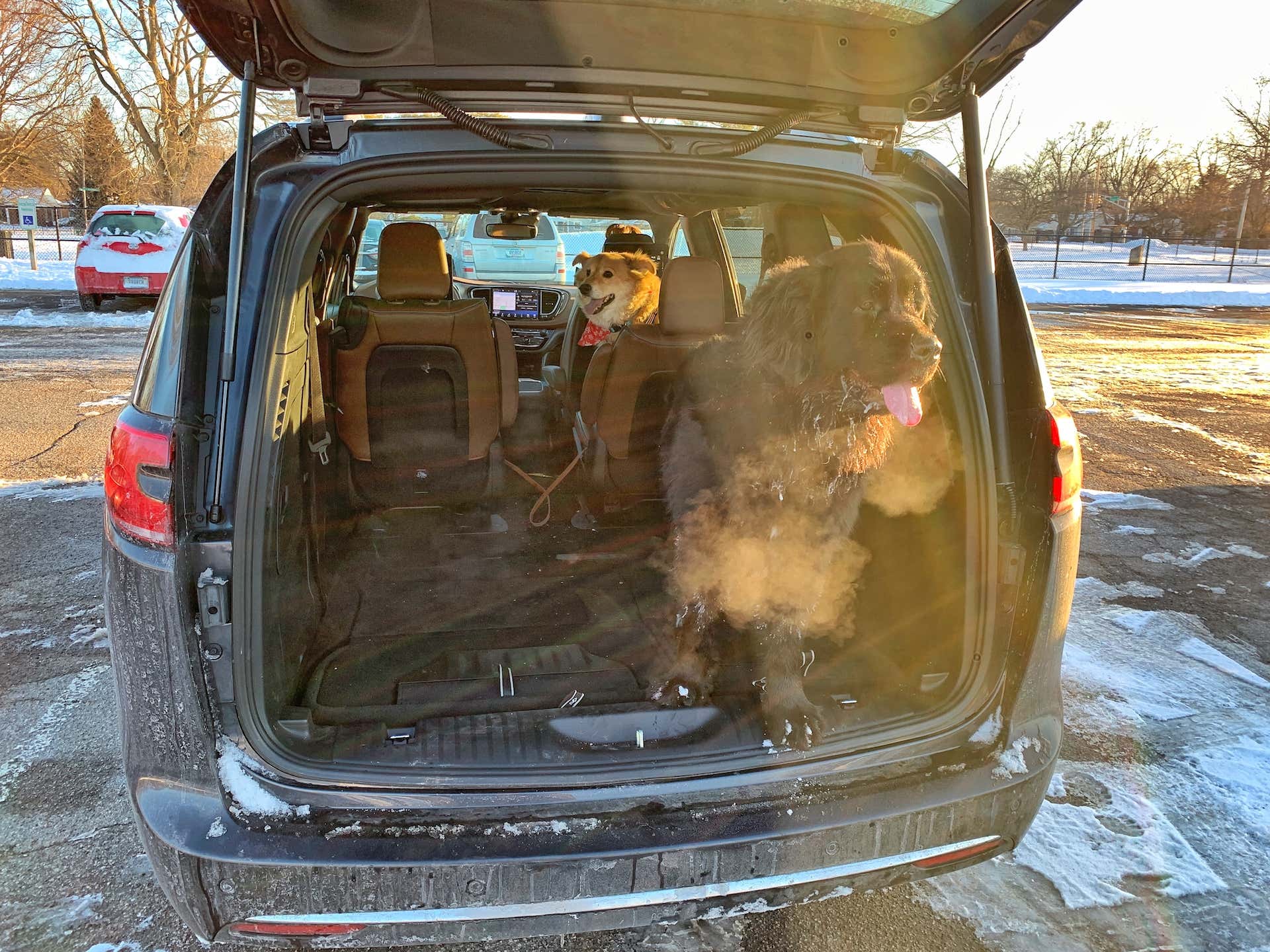 The Platinum trim’s amenities came in very handy during the cold weather, obviously, such as heated seats and steering wheel up front and heated seats for the second row. If you’re a third-row kid then you’re outta luck, but you do get some vents and USB charging ports back there. Sorry.

There really are very few things not to love about the Pacifica. And how can there not be, when Chrysler has been working with the same recipe for over 35 years, making it better and better with each generation? At this point, the minivan is Chrysler’s Porsche 911—just better at hauling your kids and without all those pesky speeding tickets.

I’m still not super sure that the Uconnect 5 is a whole lot better than the outgoing one, but folks who buy one will have much more time than I did to play with it and personalize it, or at the very least just get used to it.

On the other hand, the Pacifica Hybrid’s strengths are important ones, offering a variety of active safety features standard, good fuel economy, an ultra-practical interior, and stylish looks as far as a minivan goes. At $50,000 all of this minivan goodness doesn’t come cheap, but considering most families keep theirs for many many years, it’s certainly an expense that could be justified in more ways than one. 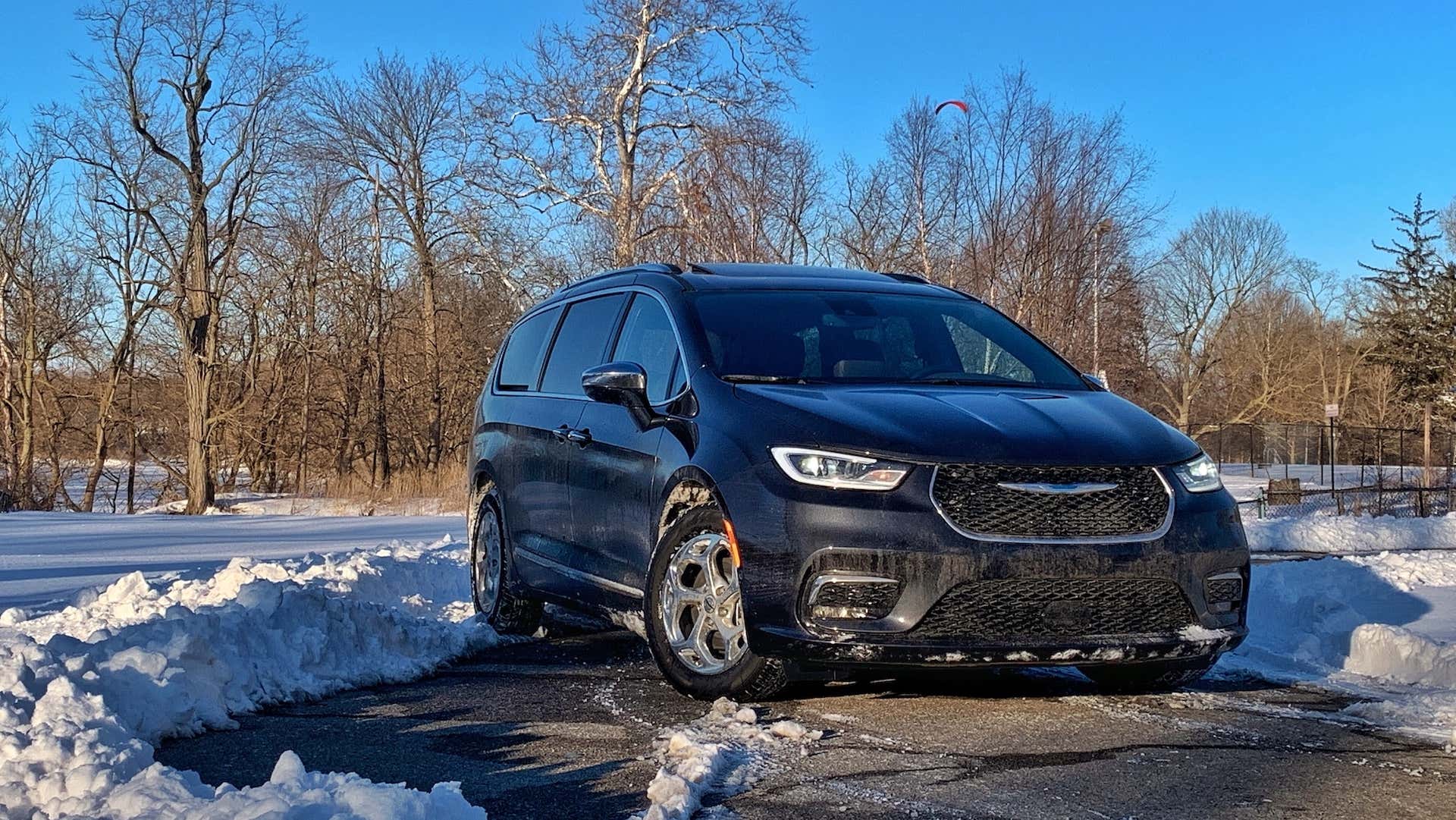 Email the author at [email protected]