Home » News & Features » 2021 Honda Ridgeline Review: Why It May Just Be the Perfect Truck for You

2021 Honda Ridgeline Review: Why It May Just Be the Perfect Truck for You 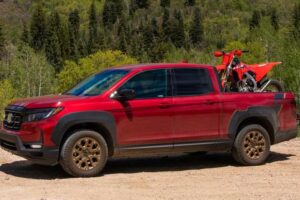 Unibody pickup trucks are having something of a moment. The 2022 Ford Maverick garnered tons of attention earlier this month and the hype around the 2022 Hyundai Santa Cruz has been years in the making. For me at least, driving the unibody truck everyone knows and loves to hate—the 2021 Honda Ridgeline—reaffirmed that Americans need to rethink their truck priorities a bit.

I love trucks, and I routinely come away impressed by the updates in comfort and capability manufacturers drop into these increasingly expensive, increasingly massive machines. Yet, when it comes to everyday usability, I’ve found that bigger, tougher, more expensive, and tech-focused isn’t always best. As pickup trucks are imbued with more… everything, people requiring something to just work and do the job are left overloaded. 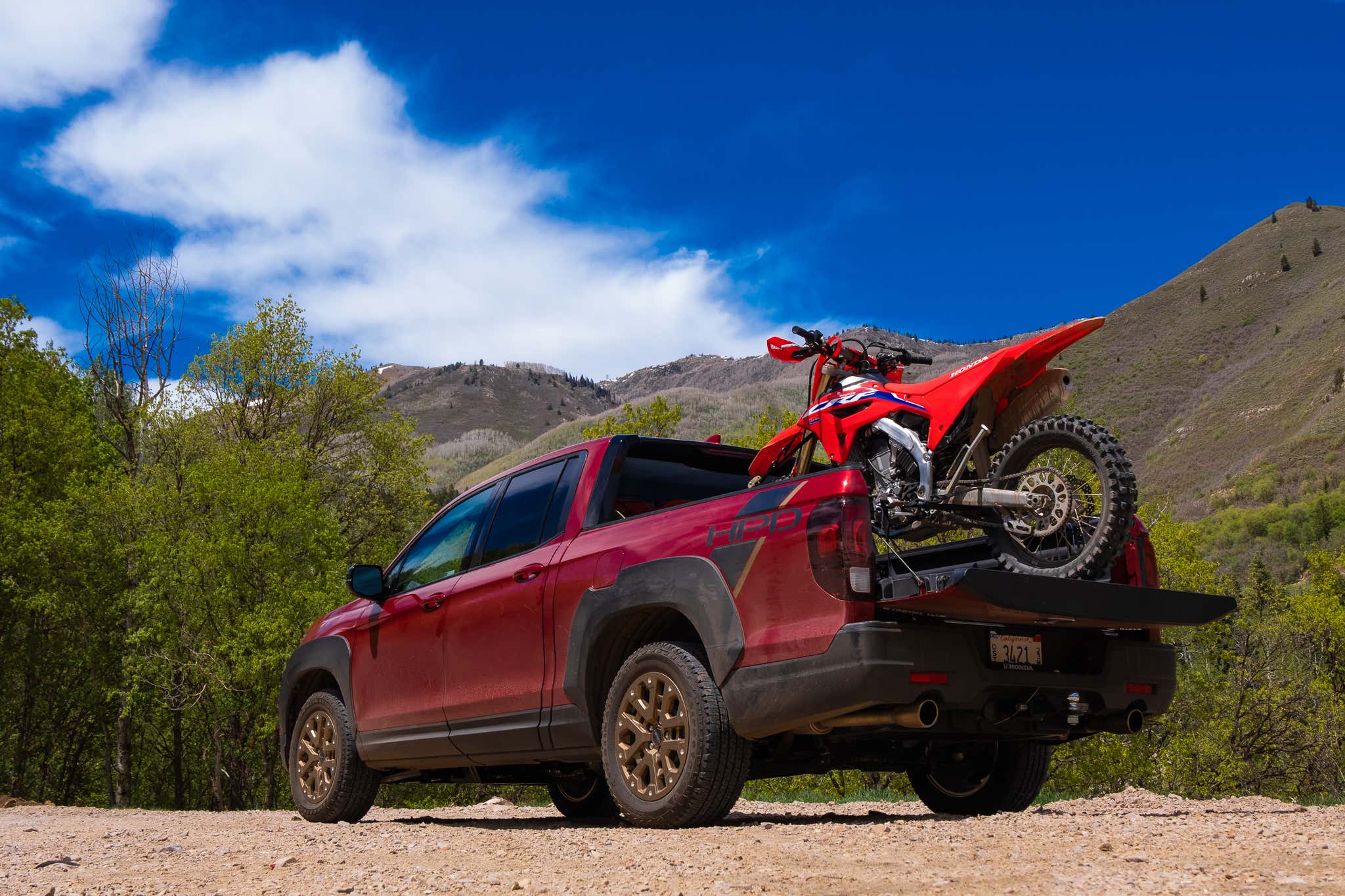 Why would I want more things that could break down? Why would I want a more expensive thing I might have to replace after a couple of years of hard use? Why would I pay a huge sum of money for on-paper performance that I don’t regularly exploit? I don’t need the ostentatiousness of today’s modern pickup trucks. I just want a truck.

That tends to exclude most, if not all, of Ram, Ford, and Chevrolet’s 31 Flavors and leaves us with one of the very best and most misunderstood trucks on the market: the 2021 Honda Ridgeline. I’m sure I’ll get a bed’s worth of comments for that, but I came away from a test drive thinking you don’t need a frame and a $65,000 price tag to put in some serious truck work. 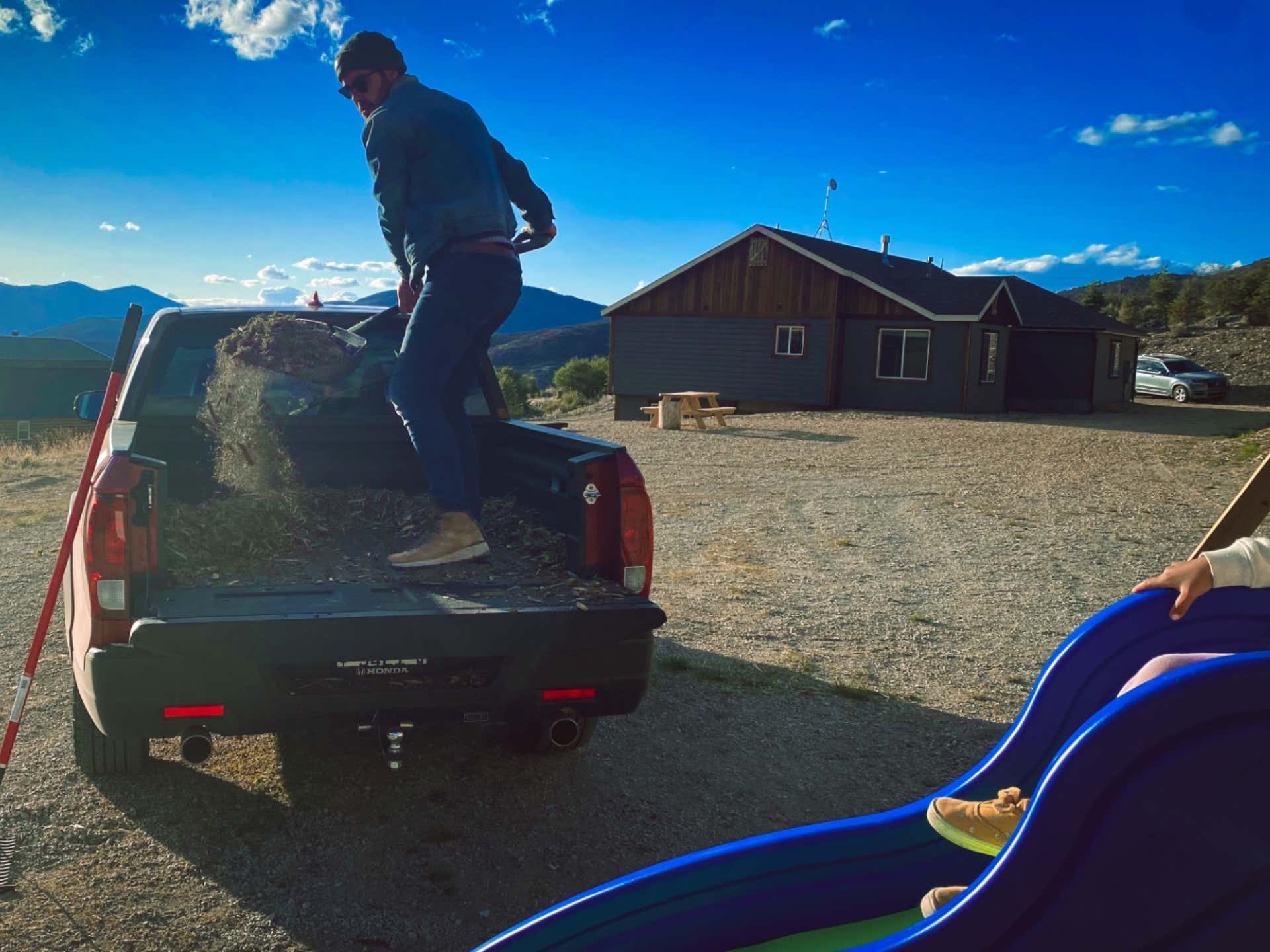 Putting the Ridgeline to ACTUAL use. 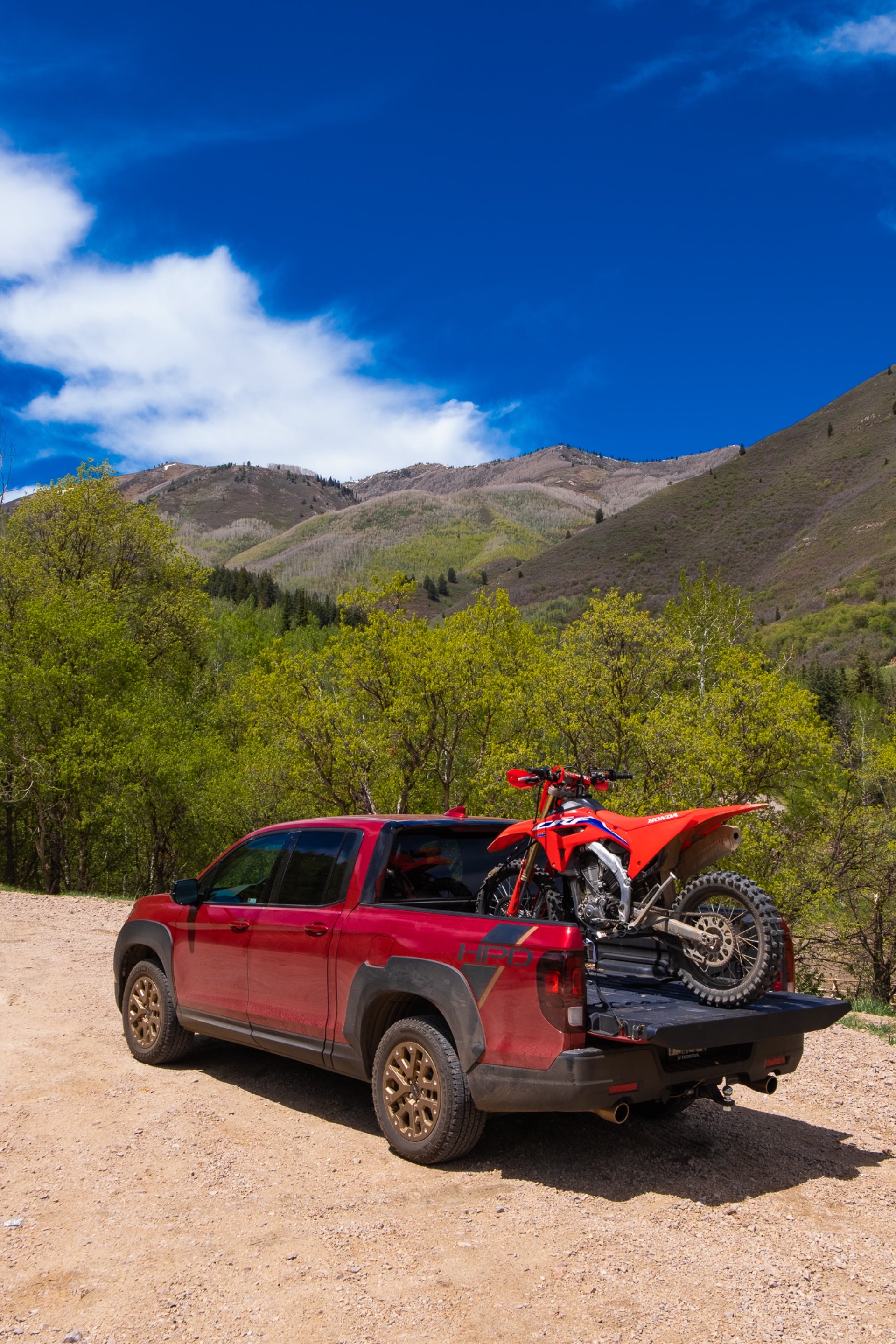 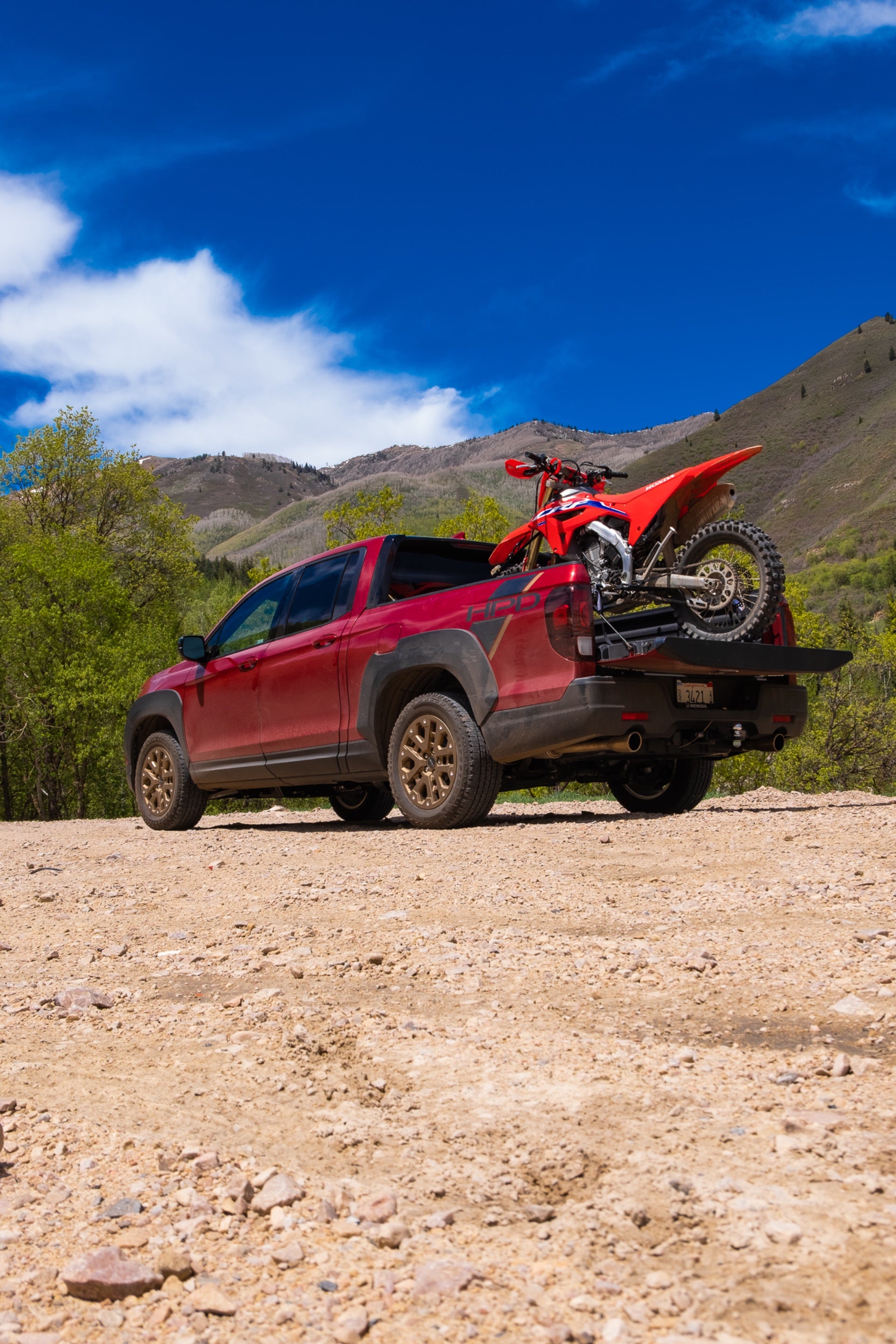 The major update to the Ridgeline for the 2021 model year isn’t in its powertrain (remains the same), interior (reclaims a physical volume knob), or its capabilities detailed above (remain the same, too), but rather in its exterior appearance. It’s supposedly a lot more macho and more truck-like.

In the previous iteration, the Honda was repeatedly knocked for being too Pilot-esque—a valid criticism, given the Ridgeline and Pilot are based on the same platform. They even use the same engines and drivetrain and much of the frontal bodywork on the Ridgeline is identical to the SUV. I never minded it but apparently, a bunch of truck buyers cried about it and Honda caved to the demands. 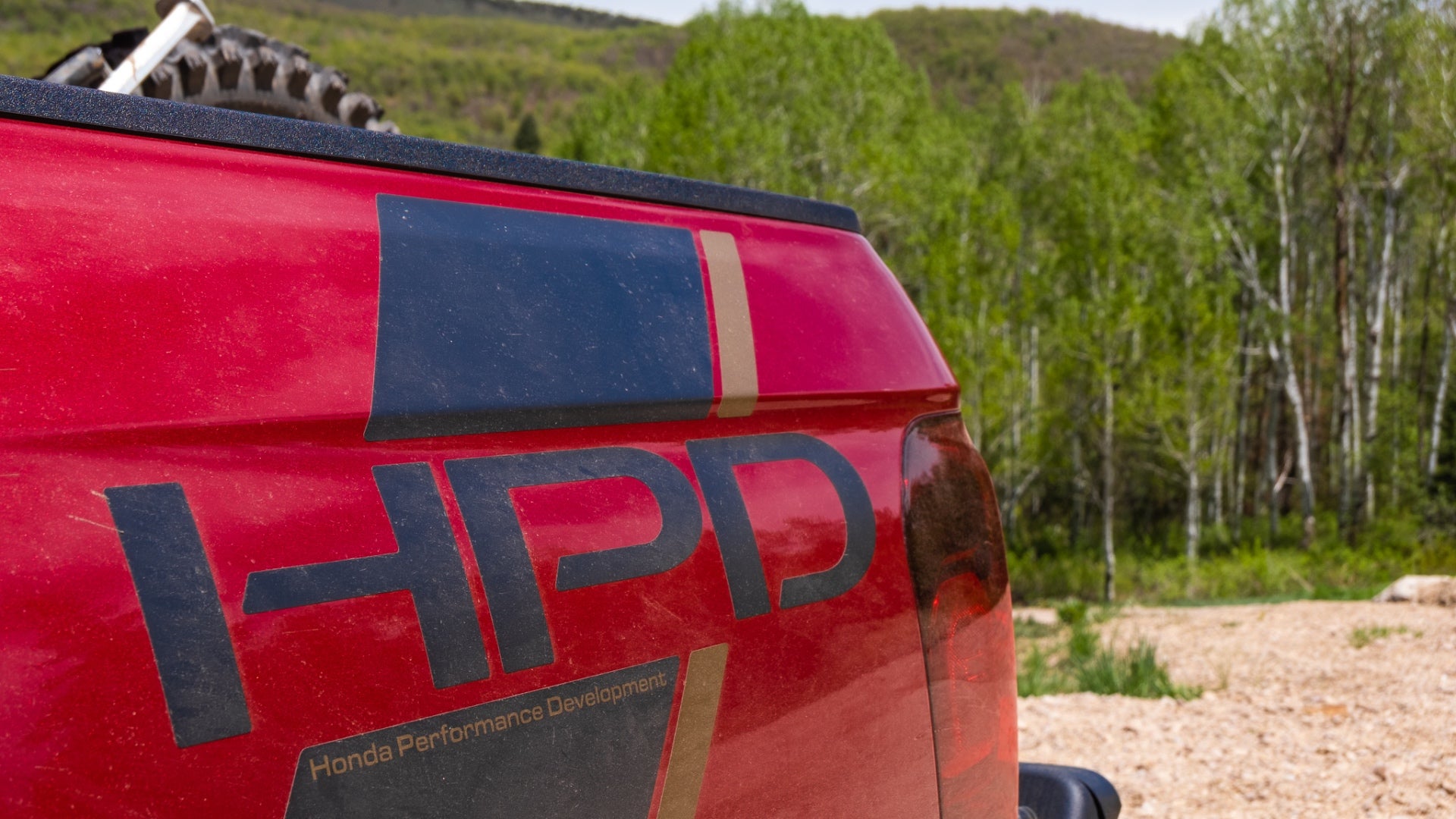 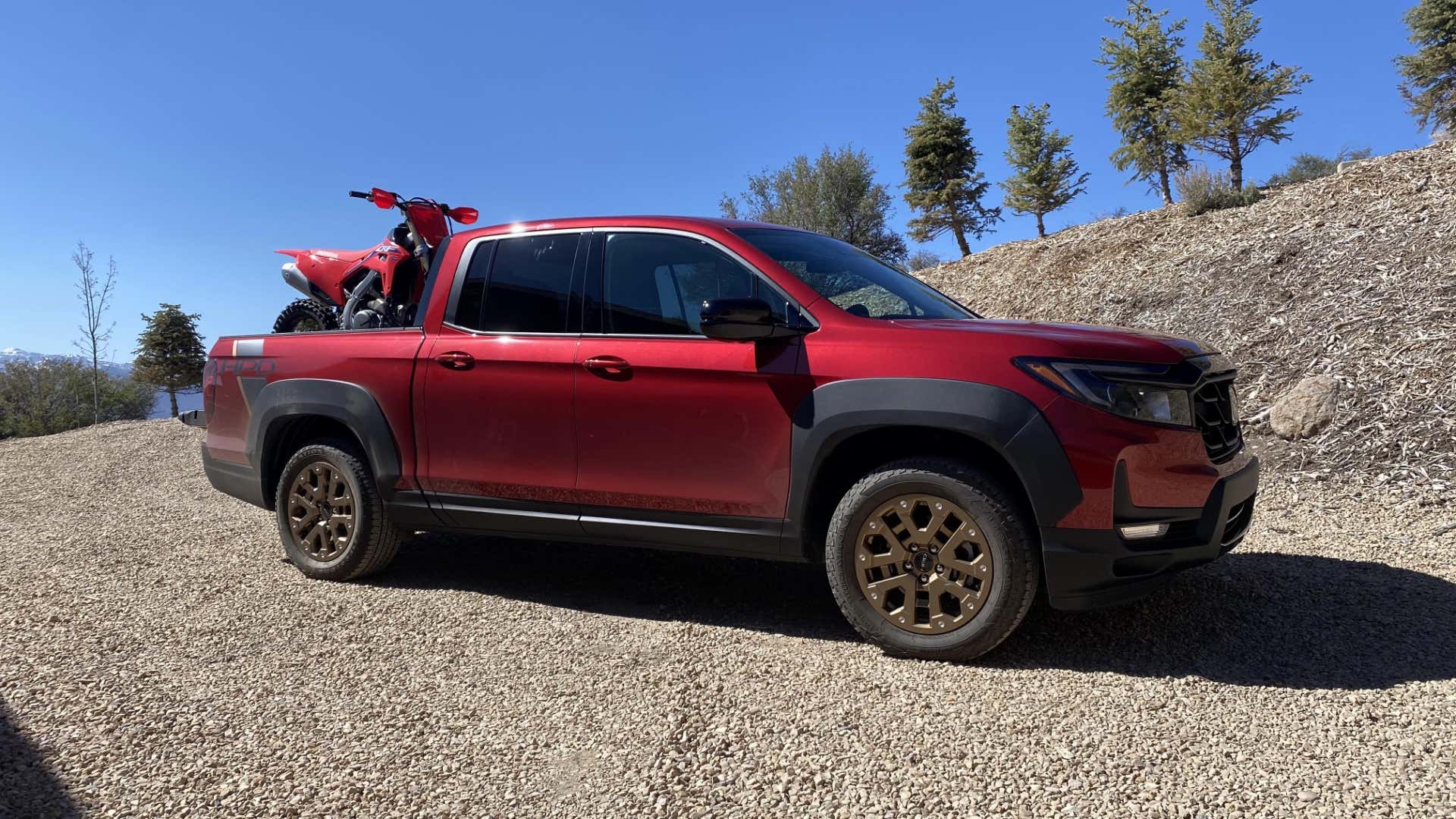 How’d Honda solve this crisis? Easy: By throwing a heaping dose of aggression and off-road-inspired paneling onto the truck, that’s how. In place of the more mundane, softer Pilot face is a new, hexagonal grille and pointy front fascia. It’s far more extra than the previous Ridgeline, but not as extra as a Ford F-150 Raptor. I’d call it a good compromise between the modern pickup’s decline toward all-out aggro and the Pilot’s svelte appearance.

The specific Ridgeline Honda sent me, however, also featured the HPD package ($2,800), which opts for black plastic body cladding, a bright-red hue, HPD stickers along the bed, a new rear bumper, some dope dual exhausts, and some HPD wheels (some of the best-looking wheels in the business) that are, of course, finished in the best wheel color you can possibly buy: gold. 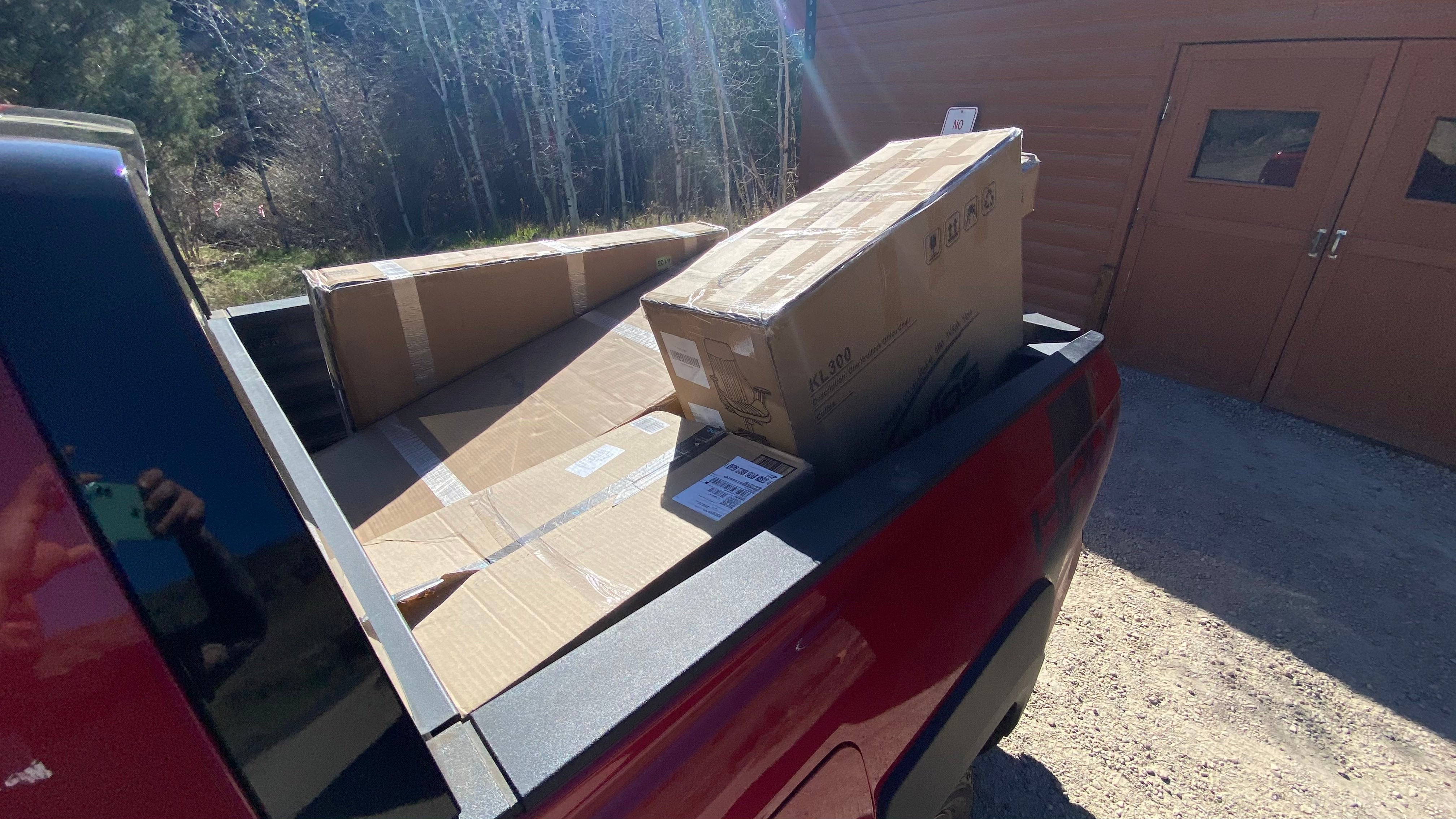 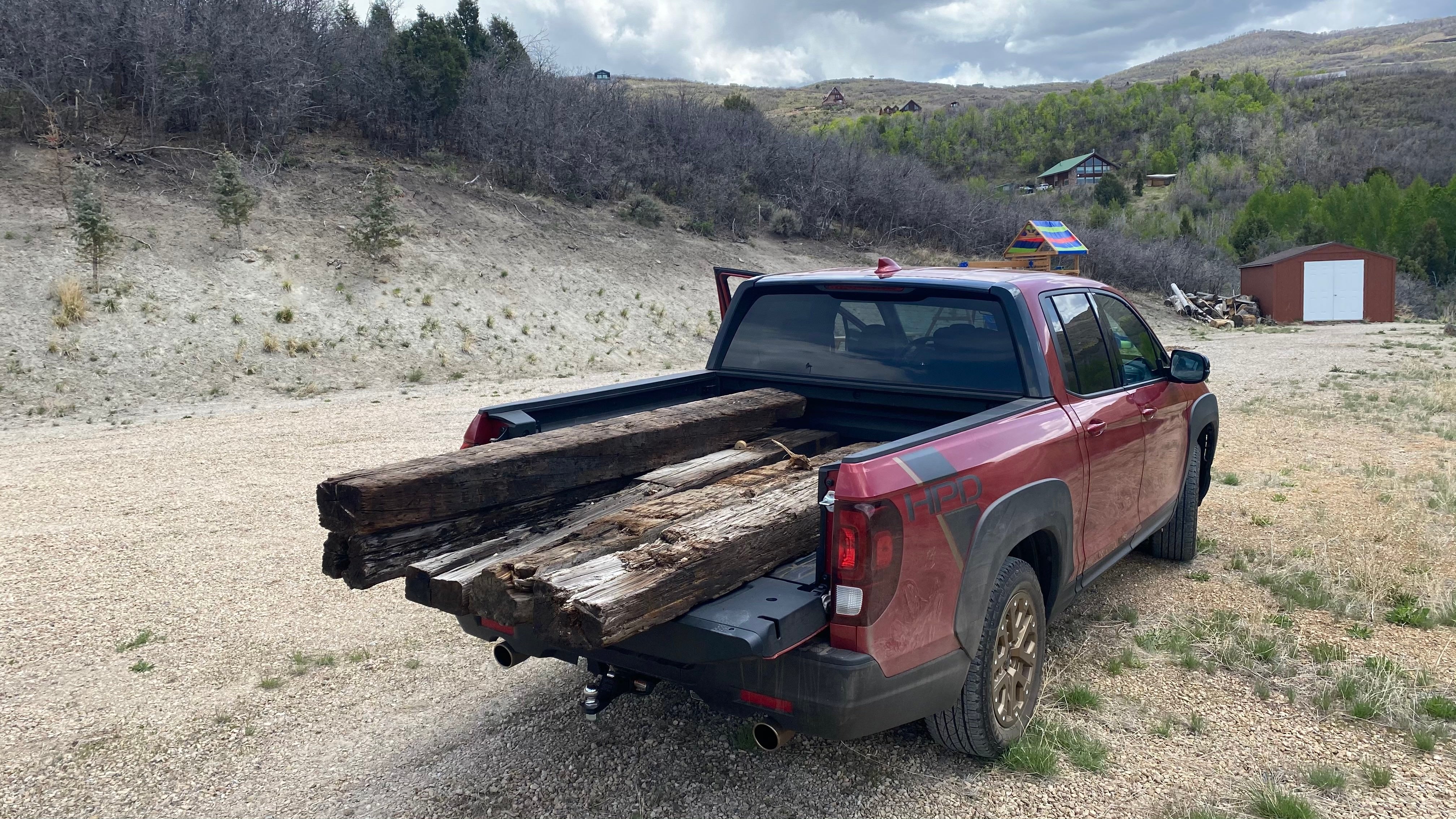 Here’s what you need to know going into this review: I’m not gentle on my cars, nor do I suffer poor build quality.

During the three weeks I had the updated Ridgeline, it not only climbed the 1,000 feet of elevation on our gravel and pothole-pitted road multiple times without issue, but I used it nearly every day in some workhorse manner. And no, I’m not talking about grocery runs to feed my three children—though it should definitely count given the way they eat.

The day after the Ridgeline arrived, my wife and I ordered 1,400 pounds of cross-eye-inducing swing-set parts that would make IKEA’s flat-packed furniture blush. Three massive boxes were loaded into the Ridgeline’s bed and driven to the back of our house. Our backyard is all gravel and in order to put together the swing set and make the ground safe for the kids, we had to sweep away and shovel a good amount from where the playset would be built. That extra gravel needed to go, so into the bed it went, and eventually dropped elsewhere on our property. There was nary a sign of stress on the Ridgeline’s shocks. The max payload is 1,583 pounds, for what it’s worth. 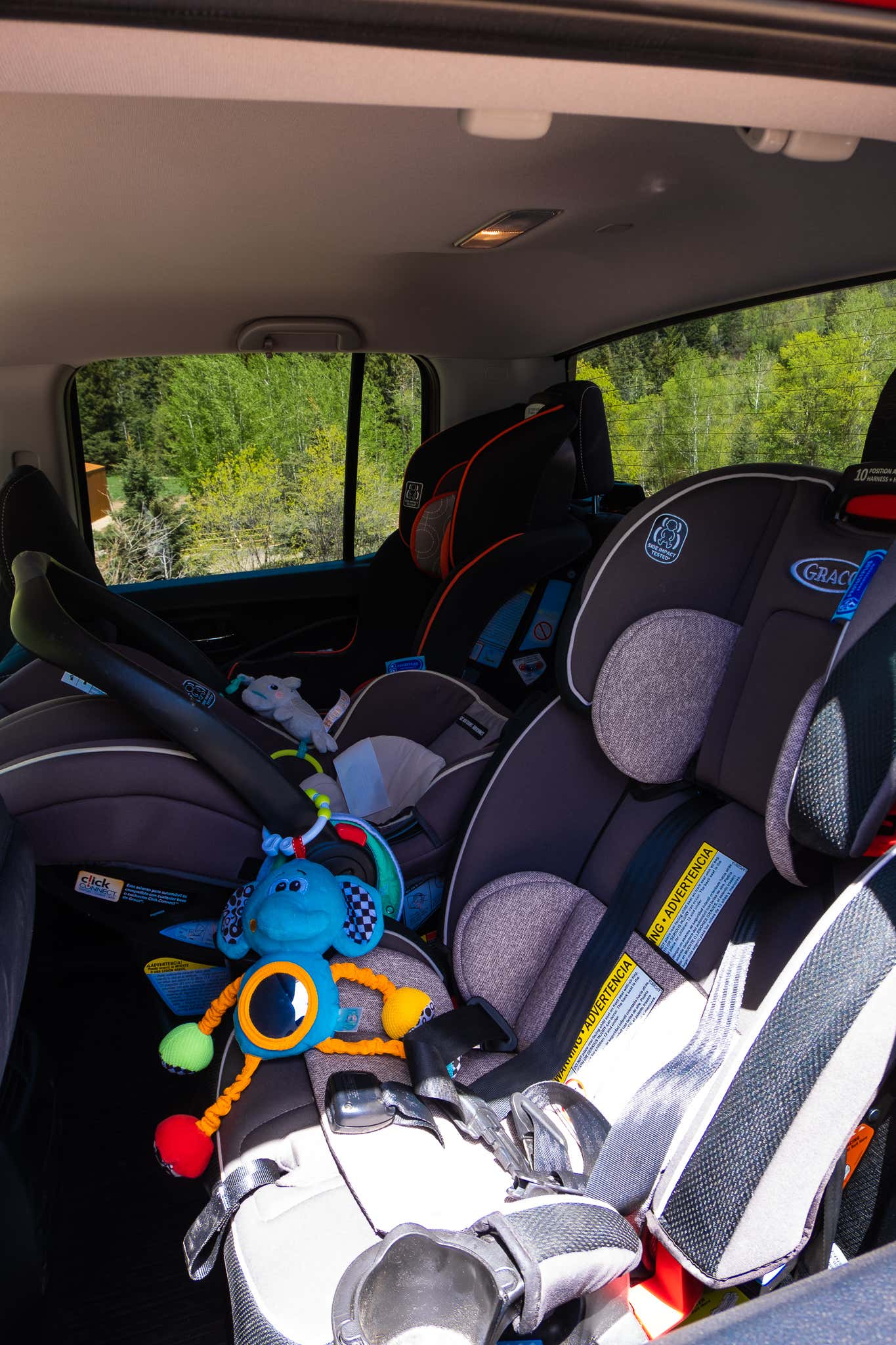 Once the playset was put together, it was clear we needed to make it safer still, so I filled the truck’s bed full of mulch. Shoveled in, shoveled out, folding and swinging tailgate for the win. Our backyard also has a nasty 15- to 20-foot drop alongside the western perimeter—we live 7,000 feet up on a mountain in Utah—and my children are, shall we say, inquisitive. I also dropped five railroad ties, left behind by our home’s previous owner, into the bed and spaced them out along near the playset, creating enough of a barrier to ensure my wife and I have ample time to reach them before they take a tumble. Fingers crossed the gambit plays out.

Far more fun than moving railroad ties back and forth, Honda also sent along a CRF450RX dirtbike with the Ridgeline for a series I’ve been writing for The Drive’s
Guides & Gear section. It’s not a big motorcycle, but it’s rough and tumble and perfect for what we’ve been producing. As such, in and out and in and out of the bed that dirtbike went, and in all states of dirty. Through all my abuse, the lined bed didn’t show a single sign of stress, scratch, or wear. I’d have thought an errant rock still stuck to the dirtbike’s knobby tires would’ve at least left a mark, but the bed still looked pristine. 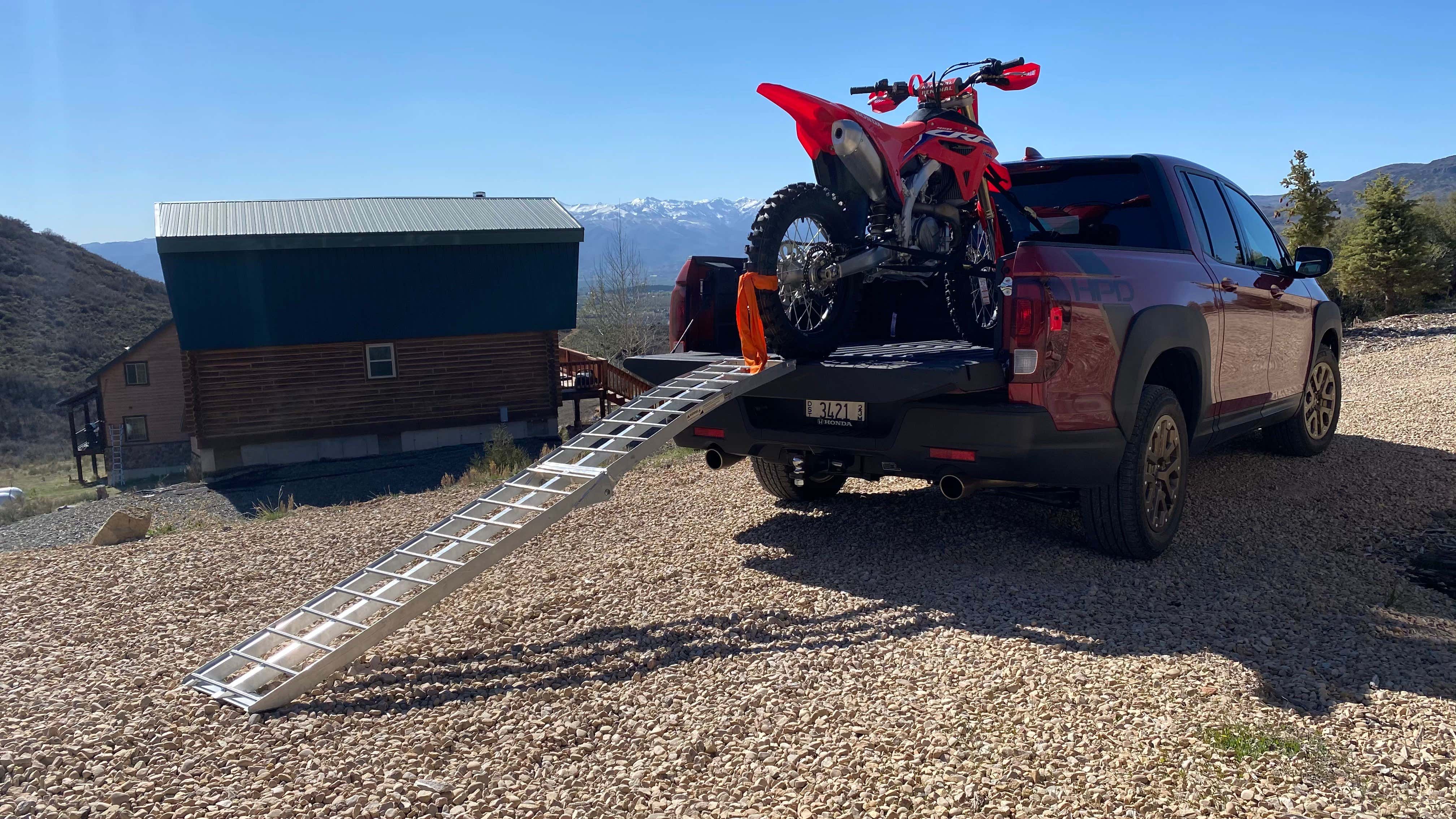 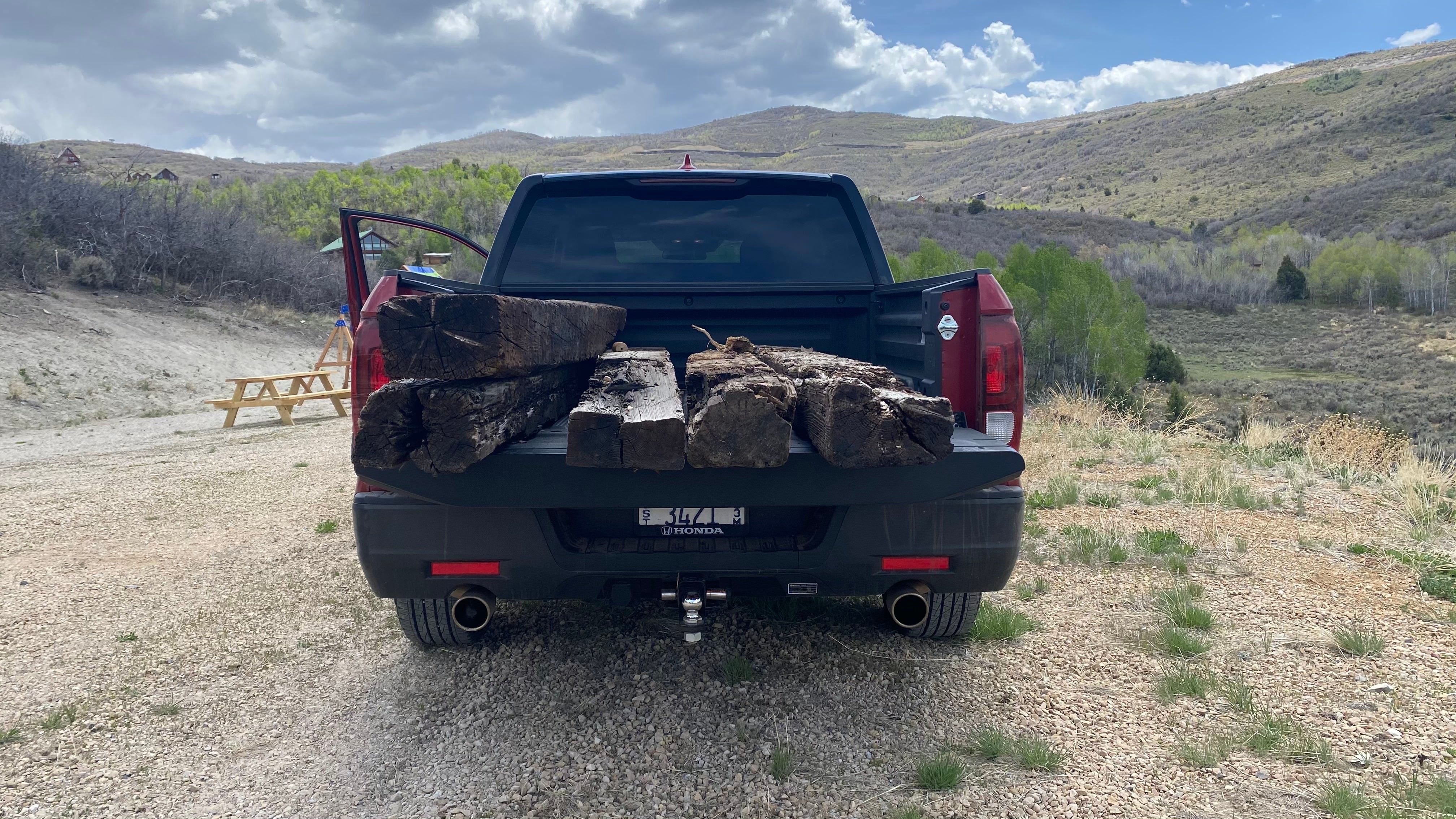 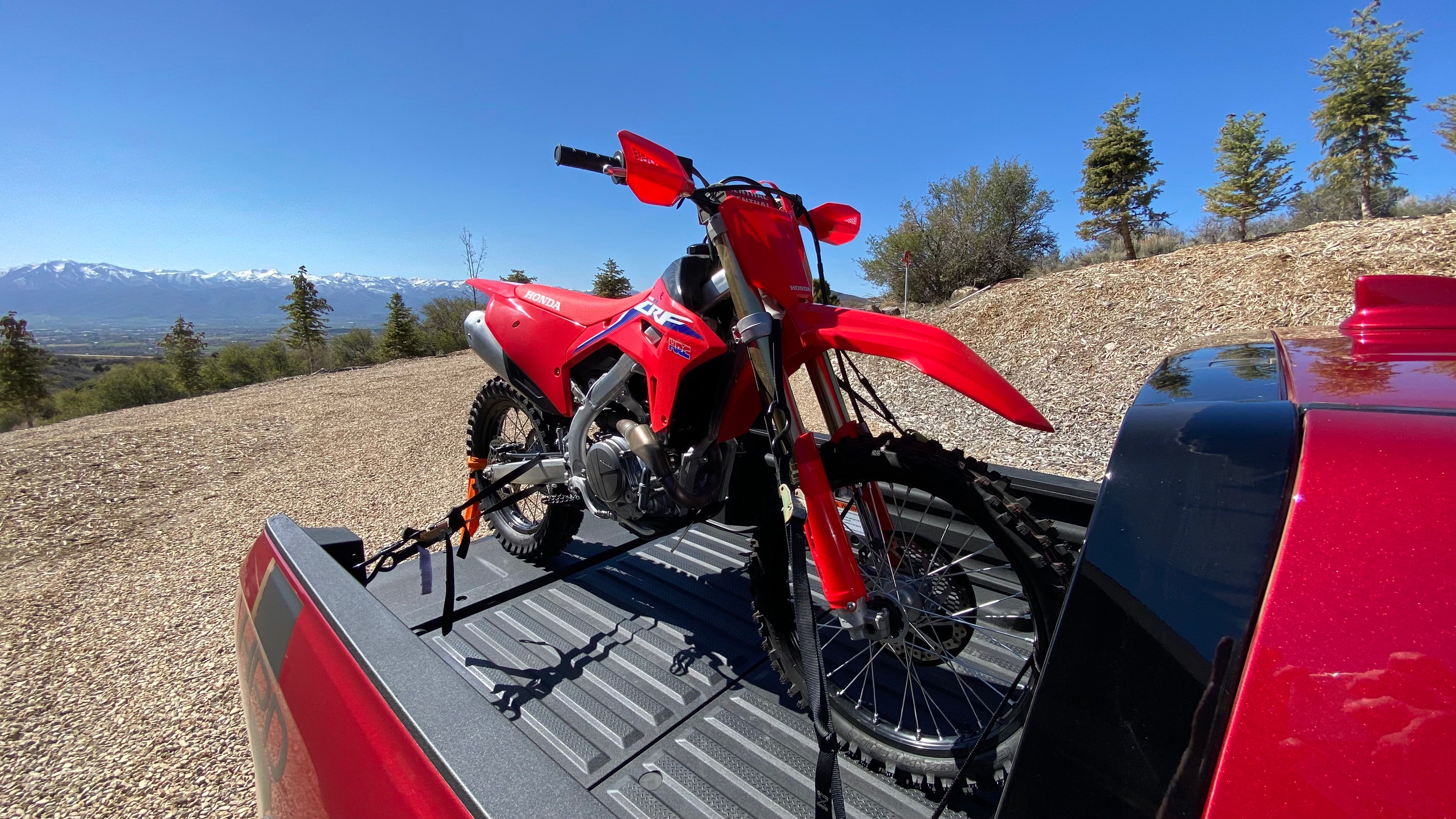 And like the bed, dirty in its current state like the rest of the truck, still looked remarkably new as well as very fine given its recent appearance update.

The Ridgeline also found use when my brother came to visit. He had rented a Jeep Compass but instead of all-wheel drive, he got the front-wheel-drive version. When exiting our gravel drive one day, he got very stuck. I mean gravel all the way up to the frame rails stuck. The Ridgeline came to the rescue with a tow strap that quickly set the Jeep free. Nice. 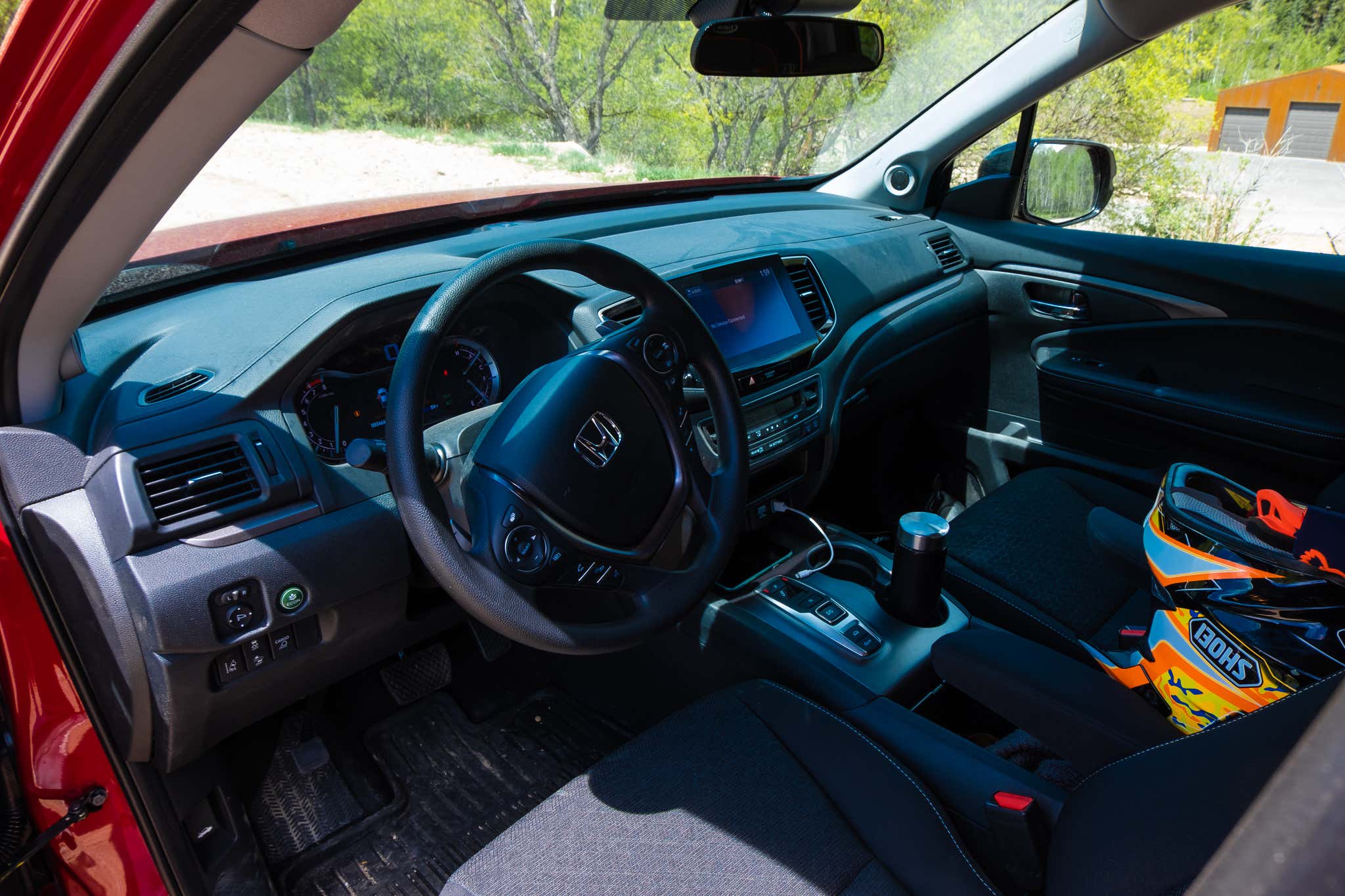 The cockpit and the author’s Shoei dirtbike helmet.

The Same But Still Excellent

Inside, you still get space for five adult humans or two adult humans and three human children in car seats. Installation of said car seats is fairly simple, with LATCH points for all three car seats and teethers for them when they begin facing forward. There’s also plenty of room to slot them in quickly rather than fighting with spacing issues in the rear seat. I need to move the front seats up in our personal Volvo XC90 to clip the three car seats in. Honda also kept the folding rear seats for additional cargo space or, for this test, room for the bed ramp.

Interior materials remain perfectly adequate for the price of the truck and Honda’s reputation. Everything feels like it’ll last for decades to come and hold up to repeated abuse, just like the liner. Better yet, the physical volume knob is back and it’s excellent. Sometimes, the old way of doing things is just the best way. The truck’s stereo and infotainment remain the same, too, and Apple CarPlay and Android Auto connectivity come standard, thank the car gods.

Honda’s standard infotainment OS, like most native systems, is trash. It’s not intuitive to use, the 8-inch capacitive screen never wants to play ball, and there’s far too much customization offered when all you want is your music and navigation. That’s about it. Manufacturers really need to give up on spending millions developing proprietary systems and just let Android and Apple do the lifting. 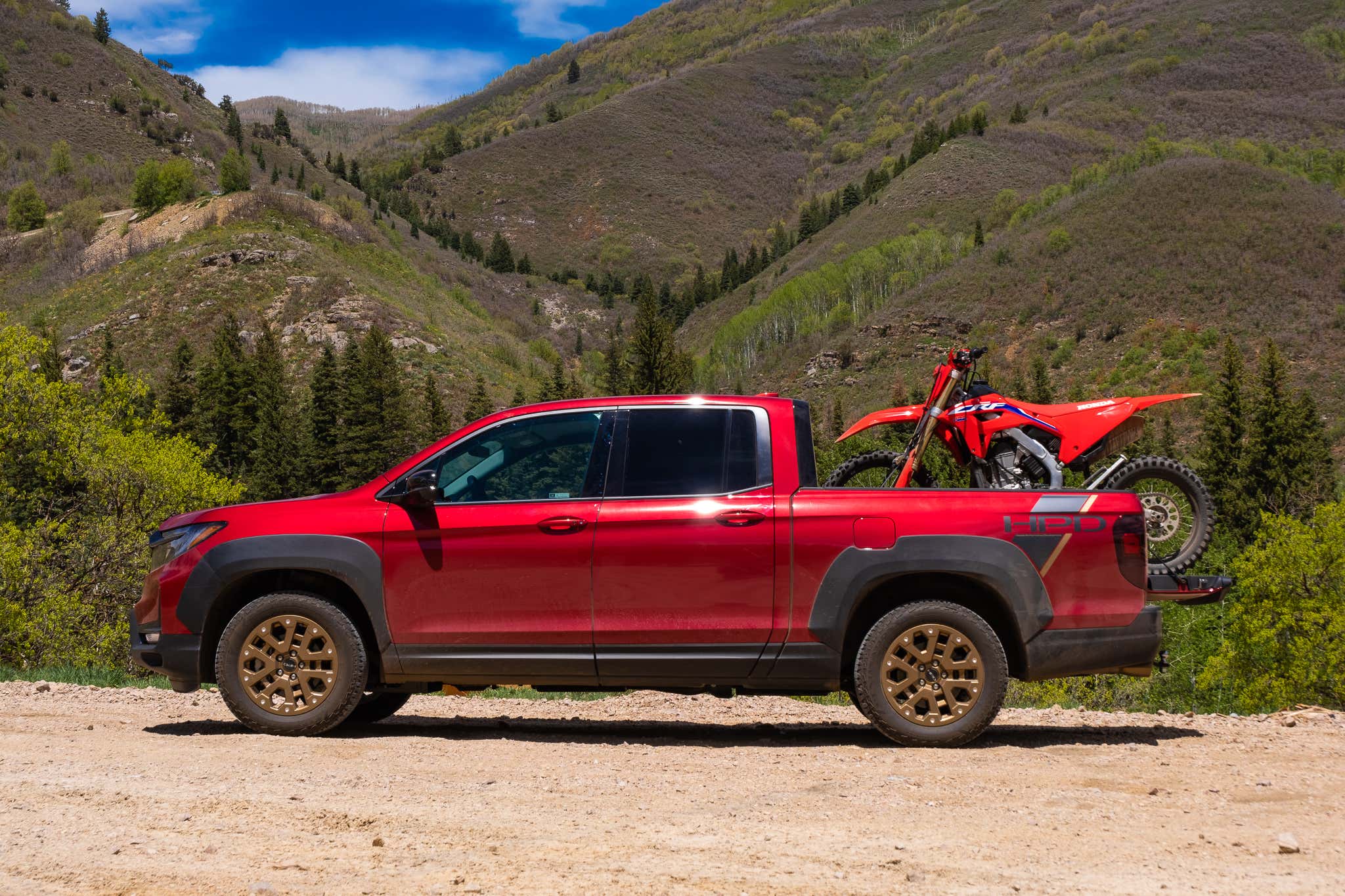 Is there a better-looking truck?

The driving dynamics of the Ridgeline really haven’t changed since its second generation was introduced in 2016. Steering is electric but works well to communicate what the road is doing. Suspension is pliable enough to run over our craptastic roads without throwing us out of the car while also remaining planted enough to keep us stable through our serpentine mountain roads. Put in more enthusiast terms, the Ridgeline has better dynamics than pretty much every other truck on the market. Because of its unibody design, the ride quality is great, as is its handling. You never feel like you’re in an F-150—detached from the ground and with poor steering. That, my friends, is a win.

And the naturally aspirated 3.5-liter V6 is… there. It’s not a tower of power by any stretch but gets the job done, even with a payload of swingset. It’s not a speed machine, the Ridgeline, but it’s not what I’d call slow, either.

In fact, if I have one gripe, it’s with the engine. While the rest of the world’s automotive manufacturers are downsizing engines, slotting in turbochargers, or going hybrid or full EV, the Ridgeline remains decidedly none of those things. I get the allure of simple and cost-efficient engineering, but a more environmentally friendly powertrain could improve the rest of the already stellar truck engineering. 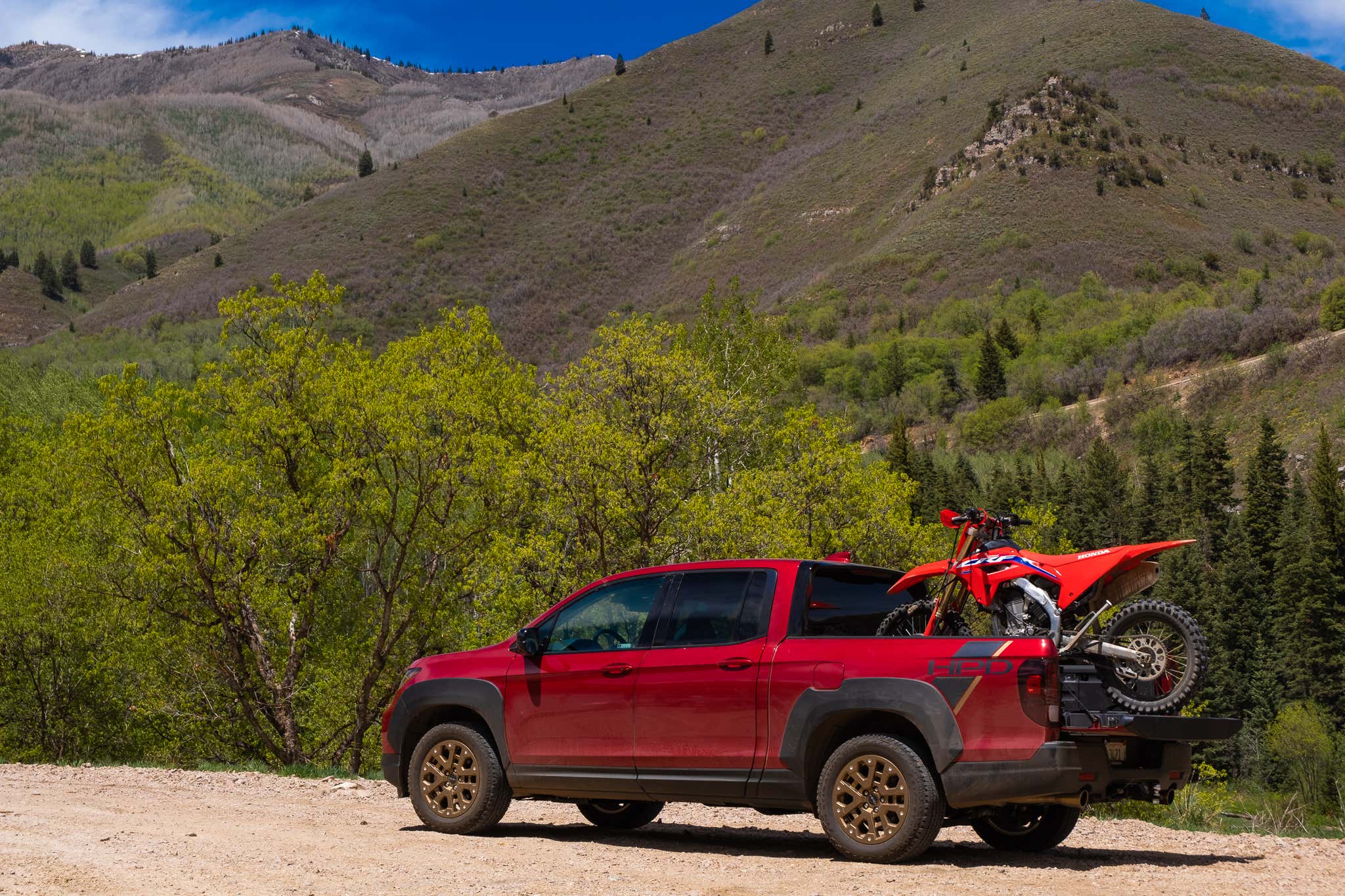 When my wife and I were looking for a new car last August, there were just two vehicles on our hit list that fulfilled our safety, reliability, and space requirements: the Volvo XC90 and the Honda Ridgeline. We searched for both at the time, and after coming up short for the Honda, we settled on the XC90. My time in the Ridgeline reignited my desire for this truck. In a sea of over-hyped, underused, full-size, and gargantuan pickups dominating the market, the midsize Ridgeline just does pickup-truck things. It hauls, it tows, it just freakin’ works. Plus, with the plushness of a Pilot thanks to the shared platform, why wouldn’t you want one? You’d have to be crazy to look elsewhere for a truck.

After years of driving many trucks, I can honestly say the 2021 Honda Ridgeline is my perfect truck. There’s an earnestness to it not being some oversized half-ton, brodozer, coal-roller, or $100,000 F-Series. I don’t need a truck that sparks controversy, ignites Twitter flame wars, or is supposedly (see also: not at all) bulletproof. That’s what the Honda Ridgeline offers: A no-nonsense truck that just does what I ask it to. It doesn’t hurt that it’s also built right here in the U.S. of A., either—specifically, in Alabama.

Honda’s pricing makes the Ridgeline even more attractive, as even with the HPD package and a few optional extras, this specific example comes in at just $40,860. The two closest rivals are the Chevrolet Colorado with the Z71 package (the closest to the HPD package and Honda’s standard equipment) that starts at $40,390 and the Ford Ranger in Lariat spec (the closest to the Honda here) that starts at $40,230. Neither, however, come close to as well-optioned as this Ridgeline in either package. You’ll likely have to spend an extra $10,000 to $15,000 to do so, and for most people, that’s make or break kind of cash.

And you definitely won’t get the Ridgeline’s dope trunk. 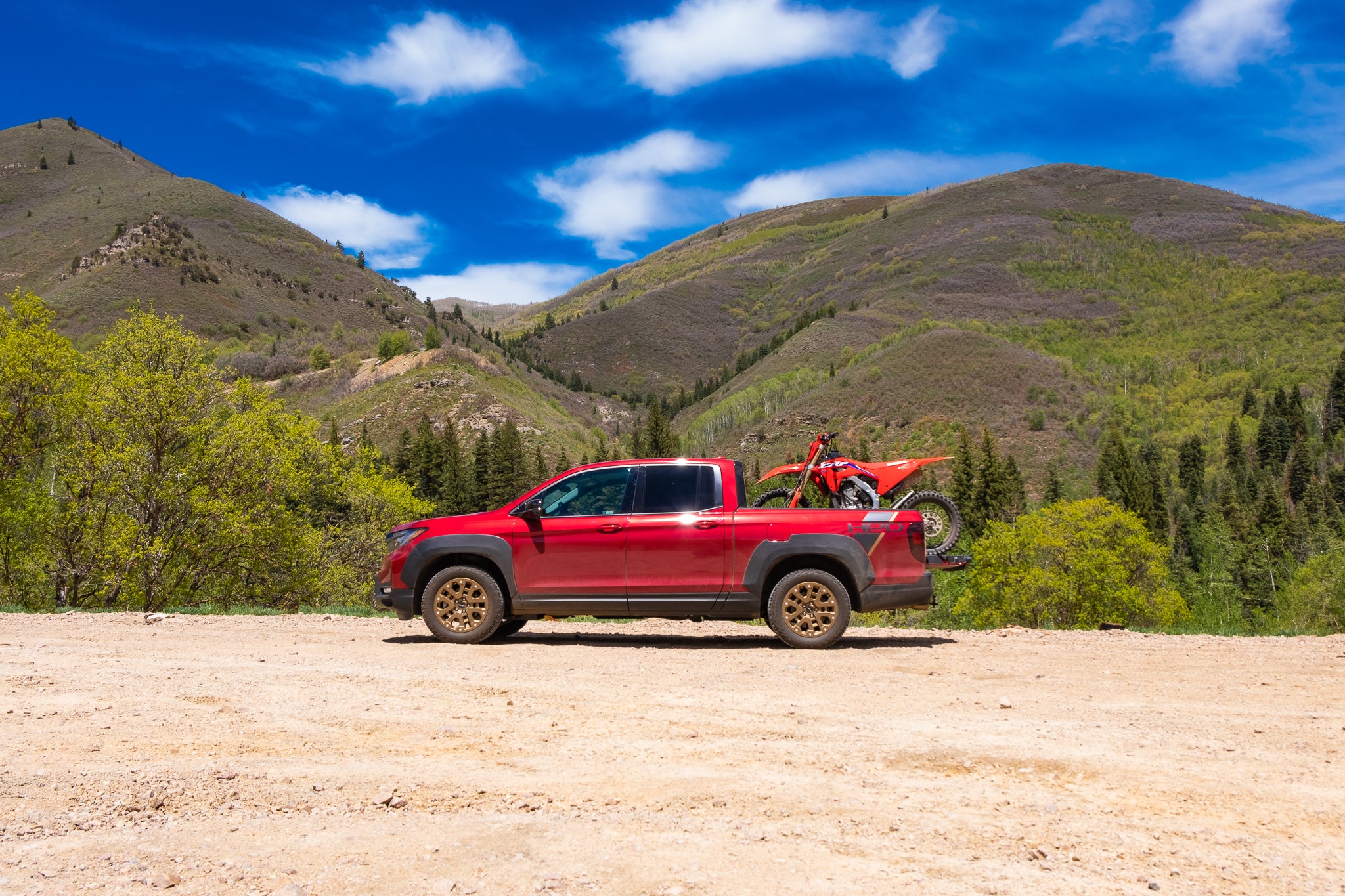 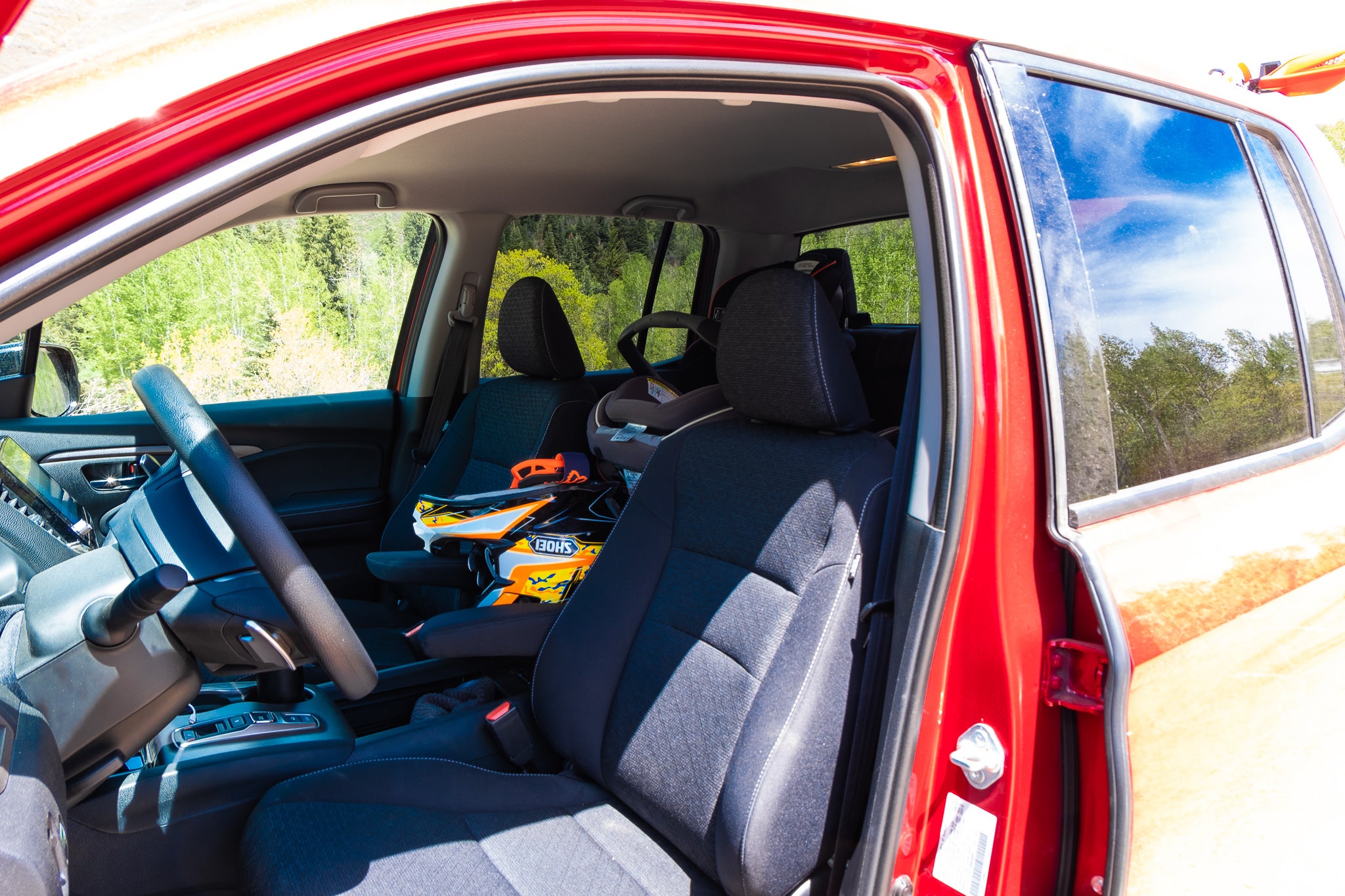 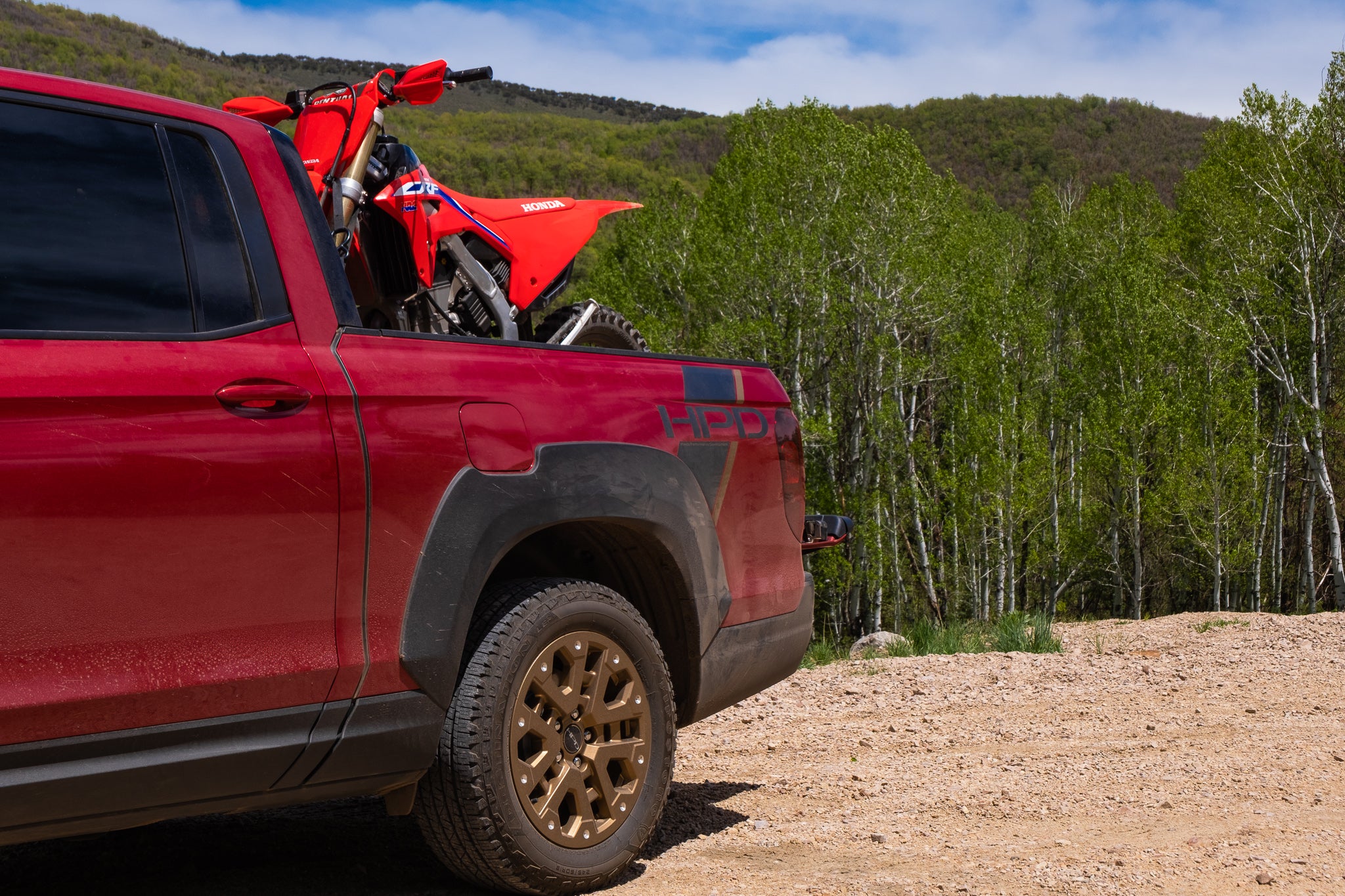 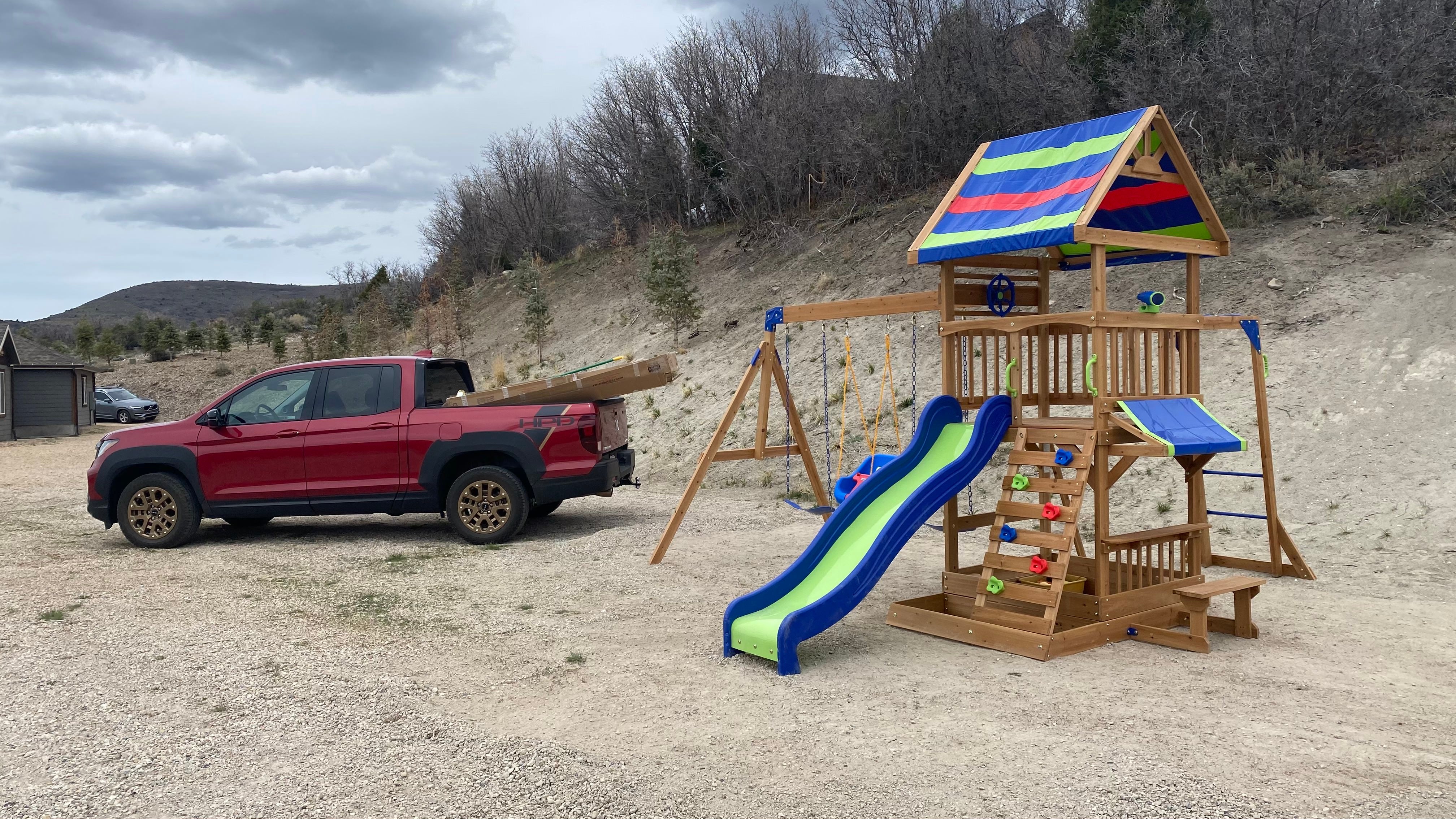 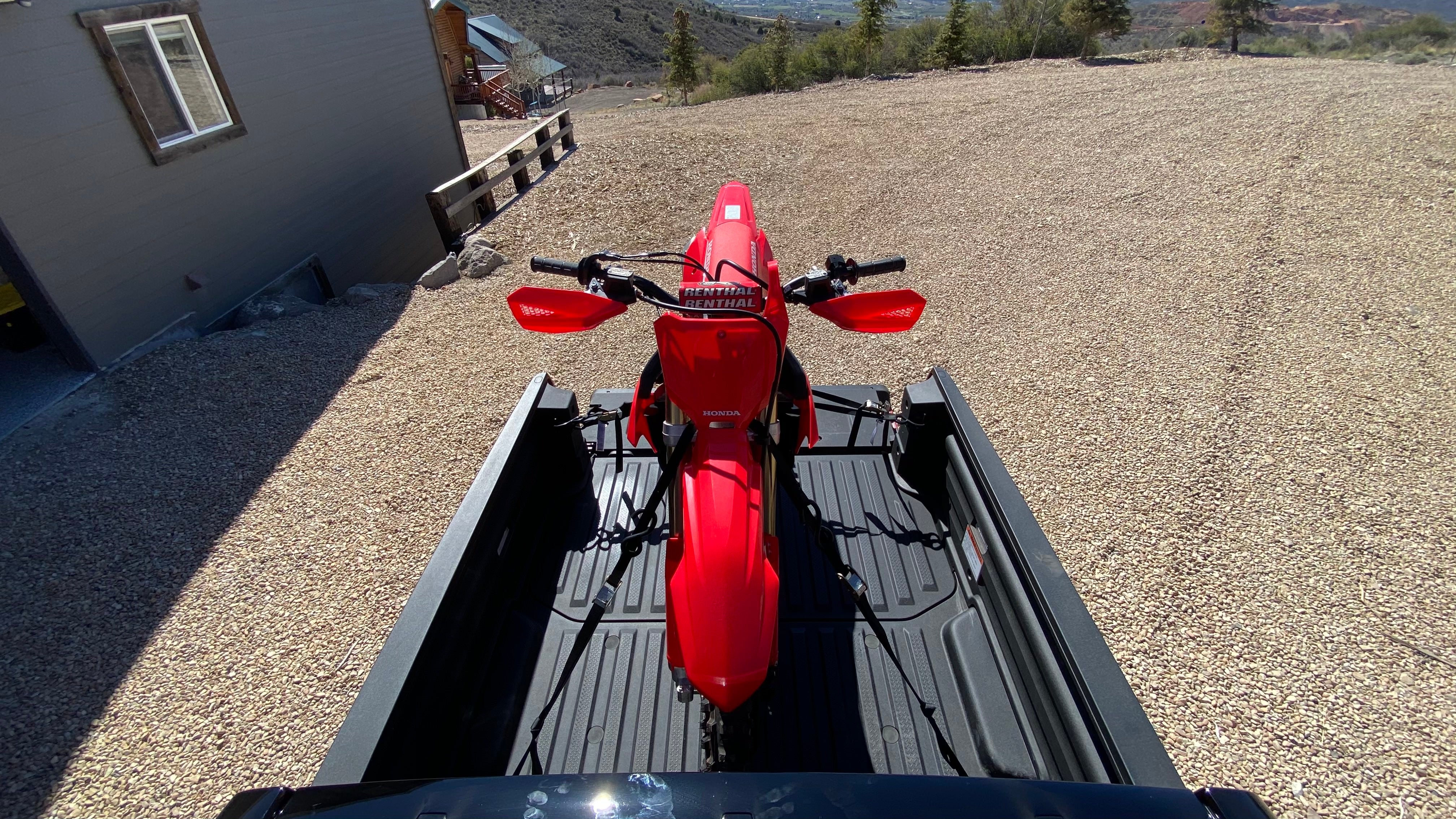 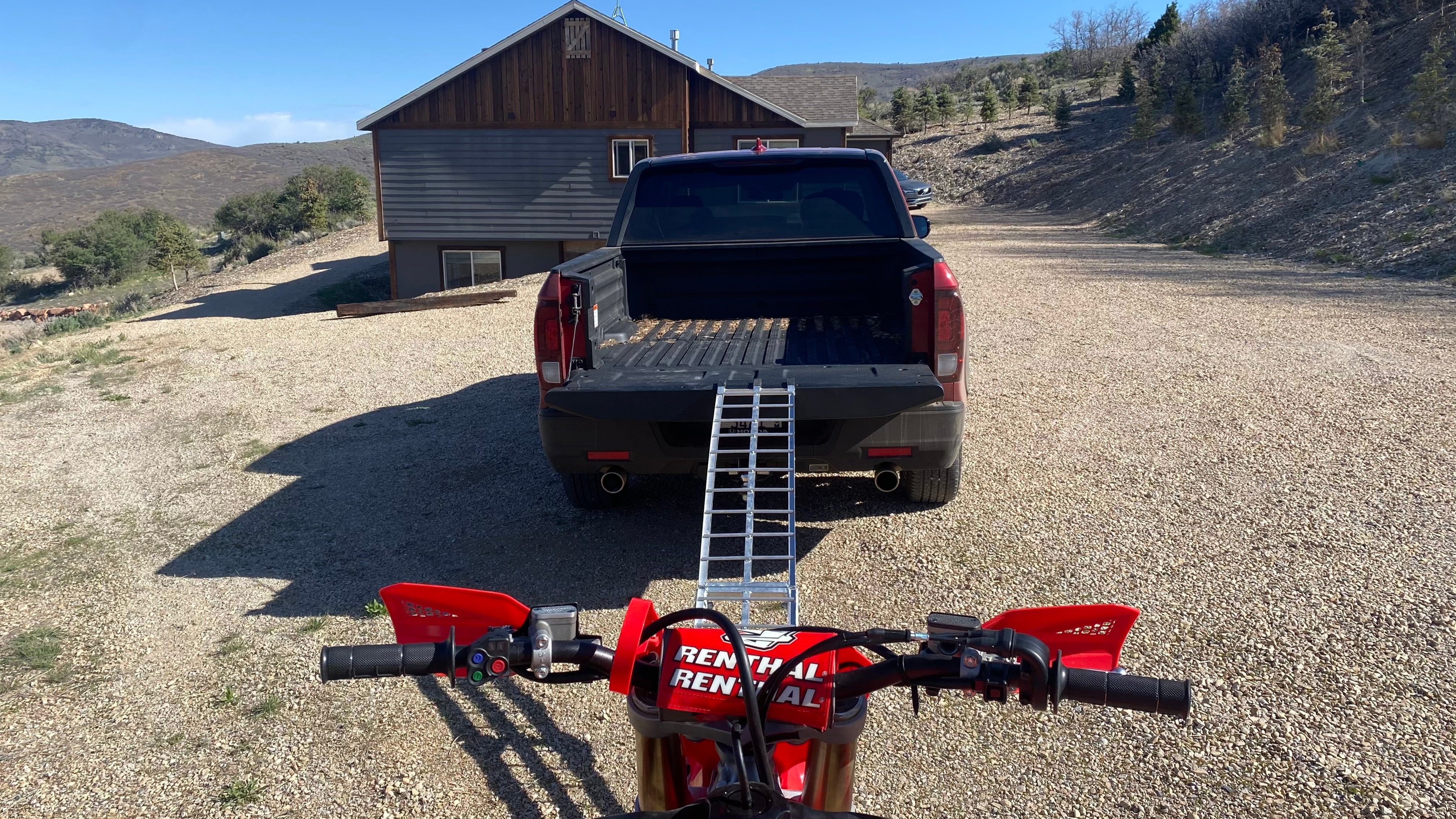 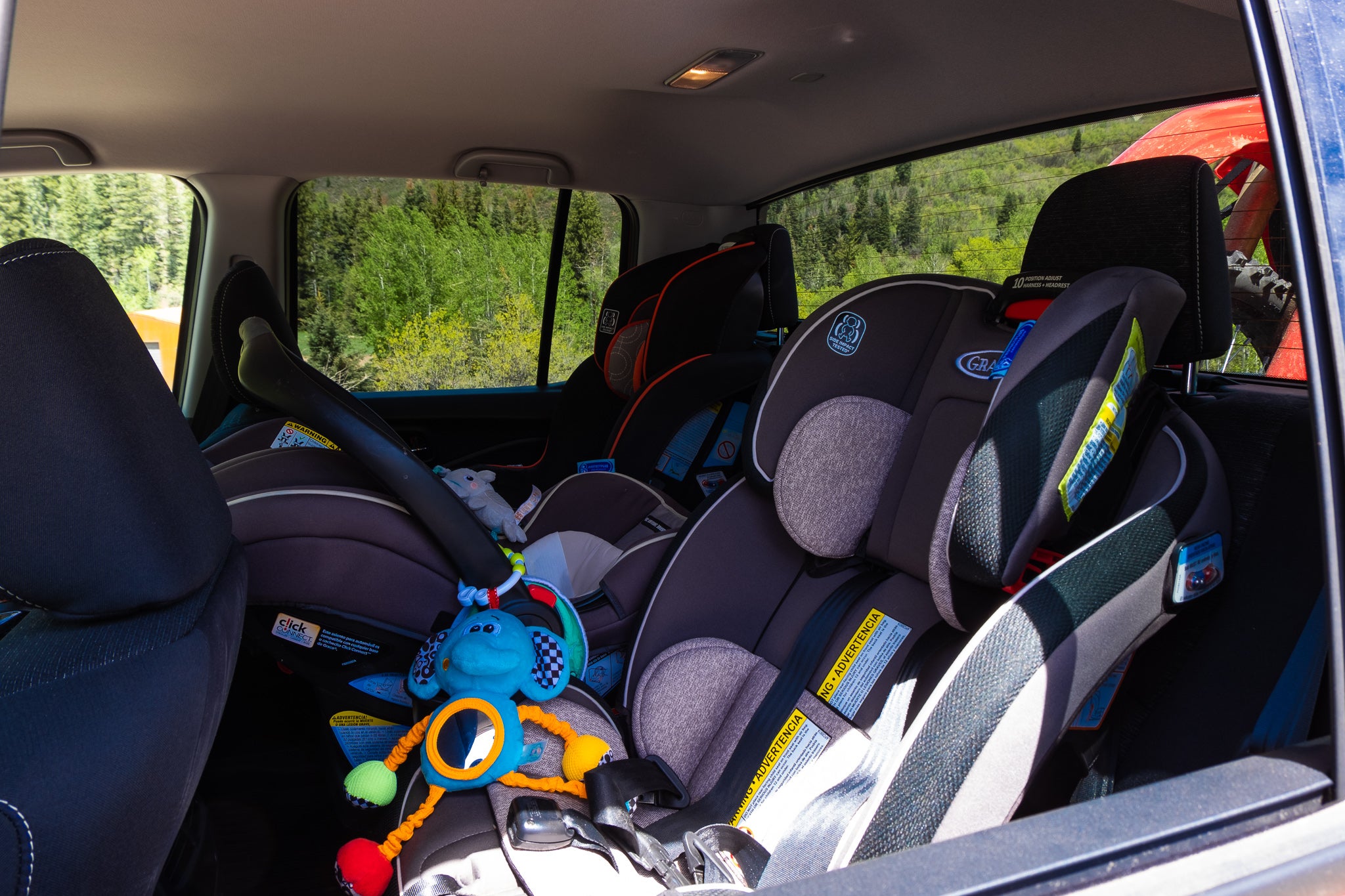