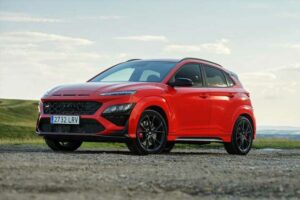 We drive the i30 N's taller, angrier sister in the UK

Let’s start with the good news: the hot hatch isn’t in immediate danger of extinction. As automotive tastes turned to SUVs it seemed that manufacturers would follow the trend when it came to faster models, replacing the tried and tested formula of a turned-up mainstream hatchback with quicker and firmer crossovers instead. But that hasn’t happened, at least not yet. Carmakers seem to prefer a cake-and-eat-it strategy, one in which the mechanical package of existing hot hatches is transplanted into taller and boxier models. So you can have a Golf R or a Tiguan R, a Cupra Leon or a Cupra Ateca or a Fiesta ST instead of a Puma ST. The market will decide splits accordingly.

It’s the same story with the new Hyundai Kona N, a slightly taller take on the existing i30 N Performance and using the same 276hp 2.0-litre turbocharged engine. Compared to the hatchback the Kona N is 120mm shorter, 118mm taller, 5mm wider and has 50mm less in its wheelbase – just about within a proverbial fag packet. It is also 80kg heavier and £1,920 more expensive, although those differences are offset by the fact the Kona gets an eight-speed twin-clutch transmission in place of the i30 N’s standard six-speed manual and higher standard spec. The list price of the five-door i30 N DCT is actually £300 higher.

What the Kona doesn’t have is a multitude of obvious competitors, at least not at the moment. It is cheaper and short on driven wheels compared to the EA888-powered VW Group offerings – like the i30 N it is front-drive only. But it is also bigger, brawnier and more expensive than the Puma ST. Begging the question: is this a niche in need of filling?

Following our go in the prototype, the Kona N you see here is European spec and a left-hooker, but – after the original launch was washed out by floods in Germany last month – I got to drive it in the UK. Like the basic Kona, the N’s design is likely to divide opinion – although nobody could accuse it of being visually boring. The use of split level headlights and tail lights gives it a slightly double-deck theme, as if one car has been sat on another, the upper lights presumably intended to emphasise chunky SUV utility. The rear bumper also features the most unlikely pretend diffuser of all time, the elements being almost vertical. The N loses the grey plastic sill cladding of the lesser Kona for a body colour finish, making it look less rugged, and the chunky sill covers make it very obvious it has been designed for life on-road rather than off it.

Beyond the higher hip point of the huggy bucket seats the interior feels more hatchey, although the Kona’s cabin architecture is almost entirely different to that of the i30 N. Equipment is good, digital instruments and a sizeable central touchscreen are standard although – first world problem approaching – the lack of a side-to-side split for the climate control heat setting feels odd by 2021 standards. Nor has the design taken on much of the modern movement towards minimalism, especially when it comes to the button-packed face of the steering wheel.

Hyundai has offered a huge number of tweakable dynamic settings since the launch of the i30 N, and the Kona runs with the same ball. In addition to the regular Eco, Normal and Sport modes there is an ultra-hardcore N setting, as in ‘Nurburgring’, selecting this getting an animated blaze of fire passing around the digital rev counter. There are also two user-tweakable N settings, these allowing the engine, steering, active dampers, electronically controlled LSD and exhaust noise to be switched from Normal to Sport or Sport Plus – and for the stability control to go from a more permissive Sport mode to fully deactivated. There’s also a big, red button on the wheel with ‘NGS’ written on it: N Grin Shift. We’ll come back to that one.

So you could spend a lifetime in the Kona N chasing an ideal set-up and possibly never find it. Yet the basics are all pretty good. The engine sounds gravelly low down regardless of which switchable mode it is in, but it is tractable and the twin-clutch transmission juggles ratios intelligently in Drive to make sure it always feels keen. In manual mode the gearchange paddles behind the steering wheel felt good, but with a slight delay between requests and new ratios. The engine pulls to its top end enthusiastically, too – with a change-up animation on the instrument pack as it approaches the 6,500rpm limiter.

Traction is very impressive given how hard the front Pirelli P-Zeros are having to work, the Kona N putting its power down cleanly. Only the combination of big throttle openings with sizeable bumps created a small amount of torque steer, and there seemed to be far less than in the frenetic Puma ST. The Kona’s limited-slip differential does fine work in tighter corners, both keeping it on line and giving decent throttle adjustability. The steering also felt a bit too heavy regardless of mode, although the reactions it delivers are accurate and proportionate.

The dynamic discipline comes at a price, though – concrete suspension. The Kona’s ride is always firm on its 19-inch alloys, even in its softest switchable mode, and turning the dampers to Sport makes it seem uncomfortably hard over choppy British tarmac. A (very brief) exploration of the full-fang N mode proved this is almost unusably harsh on anything but the smoothest surfaces.

The N setting is the one intended for track use, of course – stop laughing at the back – and with full-sized circuits a bit thin on the ground in the bits of Oxfordshire and Warwickshire used for the launch, Hyundai arranged a few laps at the Shenington Kart Circuit near Banbury instead. It was an unlikely challenge, but one the Kona N took to surprisingly well on the track’s longest 0.75-mile configuration, staying stable under braking and keen to turn and hang on in the many tight corners.

Bigger loadings proved the N can be turned properly rear-endy with sufficient mid-corner weight transfer. It also still has a proper mechanical handbrake, one the press pack boasts will “allow adventurous drivers to enjoy slides.” Given the official encouragement, it would have been rude not to – the first time I’ve experienced old-school ‘leversteer’ in a new car for several years.

Shenington also provided the obvious excuse to press the NGS button. This gives a modest 10hp overboost to the engine for up to 20 seconds, one that isn’t discernible, but also puts the transmission into its angriest setting, holding onto the lowest possible gear for as long as possible. Although Hyundai says it is intended for short notice overtakes or motorway merges I suspect its most common use will be as a ‘look at me’ mode.

The core appeal of the i30N has always been the simple combination of plentiful performance with limited sophistication, the long-established recipe that lies behind the best hot hatches. The Kona N delivers a very similar driving experience, one that is only slightly compromised by the increase in height and mass. Yet the firmness of its suspension settings feel less well suited to an SUV, this being a part of the market where buyers tend to prioritize plushness over raw performance.

Yet if you are looking for a crossover version of an old-school hot hatch, this is definitely that. In that regard, nobody could accuse Hyundai’s N Division of going soft, or of selling out its principles.