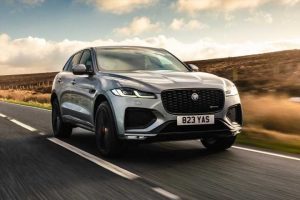 The success of the latest F-Pace is crucial to Jaguar's long-term ambitions. It shows

Depending on where you live, you may or may not be surprised to learn that in recent months, the I-Pace has been Jaguar’s best-selling car in the UK. Few could have predicted it. It has a lot to do with external factors, of course, not least the market slowdown attributed to the pandemic and the tax advantages enjoyed by zero and low-emission vehicles. Were things a little more normal, the F-Pace would likely have retained its place as the firm’s sales leader. That’s certainly remained the case on the global stage, where the five-year-old SUV has been a key asset in China and the USA. So while the I-Pace points to the future, for Jaguar right now, the success of the F-Pace is what really matters.

Which brings us to the new P400 MHEV. Arriving as part of the F-Pace 2021 range update, it uses JLR’s in-house developed inline six-cylinder petrol engine, and ranks as the hottest sub-SVR F-Pace on roads (actually, at the time of writing it’s the hottest because deliveries for the updated 550hp SVR haven’t begun yet) with a peak output of 400hp that comfortably trumps the likes of the Porsche Macan GTS and Audi SQ5. It's arguably more discrete too, even in the £57,410 R-Dynamic SE trim worn by our left-hand drive test car.

Whatever you think of the F-Pace's status as a mild hybrid, adding an electric starter generator to JLR’s already much-lauded 3.0-litre engine ought to mean good things. But thanks to the loftier demands of WLTP, the gains appear slight; the car’s quoted 28.8mpg and 221g/km of CO2 making it competitive rather than outstanding. In outright performance, a claimed 5.4-second 0-62mph dash leaves the F-Pace behind both those aforementioned German SUVs. Although the P400's brief isn’t to be hugely fast, but rather something that’s effortlessly quick and immensely lovely.

Things get off to a very good start. Identical to the new architecture we first saw last week in the similarly upgraded XF, the 2021 F-Pace’s interior is nothing like its predecessor's. It addresses every one of the earlier model’s shortcomings; it is plush and comfortable and good to look at, with a new 11.4-inch touchscreen that actually adds something to the ambience. The tech functions well, too, and the retention of proper heating dials – which control both air temp and seat heating – is a big win. We have only good things to say about the new steering wheel, digital instrument cluster and head-up display. The F-Pace is a great place to sit.

It's hard to find fault with the P400’s powertrain either. The immediate shove provided by the 48v lithium-ion battery and belt-driven generator is welcome, because it gives the car great low-rev throttle response. It masks the ZF eight-speed’s slight hesitancy in Comfort mode, and makes the 2,028kg SUV feel sprightlier than its numbers suggest. The seamlessness of the electric and petrol components is very good, with the inline six picking up where the hybrid tech leaves off, projecting a purposeful howl as it goes, and building nicely towards 6,000rpm. With 406lb ft of torque at 2,000-5,000rpm, you’re pressed into the P400’s bucket-like seats from almost any starting point – albeit at a brisk rather than ludicrous pace.

This suits the car’s demeanour. The P400 doesn’t attempt to encroach on the madness of the more obviously potent SVR. The gearbox is quick to react on the move and the F-Pace’s underlying handling talent is retained – but the mild hybrid never tries to hunker into a bend or send masses of torque rearwards. Instead, it prefers to glide along a B-road, the 22-inch rims only slightly troubled by the harshest of high frequency imperfections. Otherwise, the car is a supple, brilliantly judged steer, with a confidence-inspiring front end and, if you really want it, mildly adjustable rear. The F-Pace remains car-like in the way it asks for an early squeeze of the throttle in order to slightly tighten the line, before the all-wheel drive system (complete with brake-activated torque vectoring) hooks up and has that motor howling again. It's easy to like.

This remains the case at a more sedate pace on the motorway, where the active noise tech – a feature of Jag’s 2021 cabin architecture – does wonders for perceived wind and road noise. There’s plenty of space front and back, and thanks to the battery’s placement under the rear bench, there’s no practical downside to having the MHEV hardware aboard. You, the family and the dog could easily cover great distances in the P400, and the number of driver assist and digital visibility features built into the architecture make doubly sure of it. Although it would be hard to recommend the P400 for that job specifically, not least because Audi’s own mild hybrid offering, the SQ5 TDI, claims over 40mpg on a run. Our own motorway stint was short, but it was hard to ignore the sub-30mpg displayed on screen.

Of course, the Audi's advantage has more to do with the TDI designation than the MHEV bit. There's an obvious limit to how much heavy lifting a snazzy starter can manage, and – not unforeseeably – the P400 is a hybrid in the mildest sense. Anyone disappointed by that would do well to remember that there's a 404hp plug-in model inbound, too. What the P400 is good for instead is sleek looks, satisfying power, a smooth ride and an interior which is suddenly among the best you can buy. Assuming the car returns to the top rung in 2021, it is comfortably enough to suggest that the latest F-Pace is deserving of its big-selling status.