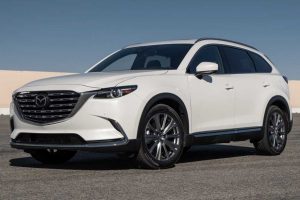 You’re sitting alone in a well-lit dining room. The only thing keeping you company is a cup of coffee and 12 empty table settings, all of which are for you. Behind a set of double doors tucked in the back corner is all the banging, clattering, and chaos of a very busy bakery. “All for me?” you might be wondering. Oh, yes. Behind those doors Mazda is cooking up the 2021 CX-9, and it (like the 11 other brands that have a 3-row SUV in the oven) hopes and prays its crossover will satisfy your appetite.

And what an appetite it is. In 2019 Americans devoured more than 8 million SUVs, and every automaker has its own approach to the 3-row segment. Its own recipe, if you will. Chevrolet’s Traverse is a hearty pound cake. Perhaps a bit bland, but palatable, nonetheless. The Kia Telluride is a new take on the Battenberg. It has flare and the flavors to back it up. The 2021 Mazda CX-9 we have here is a slightly punchier tiramisu.

In our 3-row SUV Big Test last year, a 2020 CX-9 was only good enough to secure seventh in the battle with the best from Honda (Pilot), Subaru (Ascent), Ford (Explorer), and five others. For 2021 Mazda didn’t change the recipe too much. The Mazda CX-9 Signature AWD we have here gets a slightly more regal grille and fresh wheels on the outside, plus a larger 10.3-inch infotainment display, quilted Nappa leather, and some more USB ports on the inside. That’s it.

The $395 Snowflake White paint on our $48,100 CX-9 tiramisu (the only optional extra this car had) resembles mascarpone while the deep chestnut Nappa leather interior mimics the thin layer of cacao powder that rests above the Kahlua-soaked lady fingers. Just as it was last year on my trip to Las Vegas, those Nappa leather chairs proved to be an excellent place to spend time. Up front they’re both heated and ventilated, and they’re wonderfully soft to the touch.

Although the primary controls don’t differ from those of the 2020 CX-9, the bigger 10.3-inch display is crisp and much more pleasant to use than the old car’s 9.0-inch unit. For whatever reason, its scroll-wheel-only operation is also easier to get used to in the CX-9 than in, say, the CX-30. Maybe that’s down to the bigger screen or the cabin’s ergonomics, but in the CX-9 the fact that I couldn’t tap the screen didn’t displease at all. Other niceties like the heated steering wheel, surround view cameras, adaptive cruise control, and dual-zone climate control bolster Mazda’s case to be seen as a near-luxury brand.

But have the changes made the Mazda any more delectable? In short, no. But it’s only once you cut through all of its layers that you see where the CX-9 sets itself apart from the 11 other SUVs in its segment—and most of that is down to its delicious handling. Motivation comes courtesy of Mazda’s now ubiquitous turbocharged 2.5-liter I-4 that makes 227 hp and 310 lb-ft of torque on 87 octane. On 93 octane, power rises to 250 hp and 320 lb-ft.

Since this car is mechanically identical to every other CX-9 we’ve tested since 2016, next to nothing has changed in terms of performance. The big 3-row still hits 60 mph in 7.2 seconds and runs through the quarter mile in 15.4 seconds at 90.0 mph. All that really means is the Chevrolet Traverse,  and Honda Pilot (both of which use a V-6 as their top-of-the-line powerplant) are quicker to 60 mph and faster through the quarter mile.

Move from the dragstrip to the skidpad, though, and things get a whole lot tastier in the Mazda. The 4,365-pound, 16.6-foot-long CX-9 handles like something much smaller, and the numbers prove it. Around our figure eight, the big 3-row managed a 27.2-second lap at a 0.62 g average. Not only is it quicker than the aforementioned Pilot, it’s actually quicker than the smaller Audi Q3, Acura RDX with SH-AWD, and Lincoln Corsair 2.3T—all of which have far superior weight-to-power ratios.

“Plenty of power to get the CX-9 going and surprisingly good brakes to slow it down,” road test editor Chris Walton said. “Good turn-in with mild understeer, then regains balance on the skidpad, and actually begins to rotate nicely, cool! Then ESC ruins the fun by grabbing a brake or taking throttle away until the steering wheel is centered. There’s a lot more sportiness here than is allowed to show …  but non-defeat ESC ruins the party.”

Despite the regular intervention of an undefeatable stability control system, Mazda’s biggest passenger-hauler  somehow still subscribes to the brand’s now long-forgotten “zoom zoom” ethos even though it’s largely missing from the rest of the brand’s mature, almost sedate lineup. Even though it commands an electrically power-assisted rack, the steering wheel still tingles with precious feedback over busy road surfaces and exhibits excellent body control over undulating ones. The CX-9 is far more nimble that its dimensions would imply, and from behind the wheel it’s both engaging and tactile in a way no other SUV in its class is.

It might not be a “driver’s car” in the truest sense of the term, but it is the sub-$50,000 SUV for the driver who used to own a Golf GTI, started a family, and had to give up the hot hatch. From behind the wheel, the CX-9 goes from merely satisfying to scrumptious. But like having caffeine after dinner, it’s not without its drawbacks, and there is one major issue that might keep you awake long after those who opted for the poundcake or the Battenberg have called it a night.

The problem is portion size. Although the front of the Mazda is spacious and luxurious, the same cannot be said of the third row. Any fully grown human being simply won’t fit back there—and even the tiniest of tots would struggle to find it comfortable. And the captain’s chairs that take the place of the second row’s bench in this Signature-spec model, while heated and relatively luxurious for its class, mean the CX-9 can really only seat four.

Adding to this particular frustration is the fact that the CX-9 has is a pitiful amount of cargo space for what is supposed to be a large SUV. Behind the so-called third row, there is only 14.4 cubic feet of space. That’s way down on something like the Kia Telluride, which offers a minimum of 21 cubes of unoccupied air to work with. Not only that, but the CX-9’s narrow dimensions mean that stuff has to be piled high in the back, and that can end up severely limiting rearward visibility, with no camera-view mirror option offered to “see through” the cargo.

Spatial concerns are one of the reasons the CX-9 only managed seventh out of the nine SUVs we tested last year. I was one of the judges on that test, and I fought like mad to try to inch it up the rankings, but alas, more experienced heads prevailed. And you know what? They were right. Shoppers looking for a big SUV don’t want a driver’s car; they want, well, a big SUV. And the CX-9’s biggest flaw is that it isn’t large enough to comfortably swallow six (or seven if you opt for a lower trim with a bench in the middle row) and their gear, too.

At the end of the day, the Mazda CX-9 is a delicious SUV made with high-quality ingredients and a dollop of the old Mazda we used to love. But there just isn’t enough of it to go around. As such, it will have to be shared in smaller portions but will no doubt be enjoyed thoroughly by everyone who gets a bite.