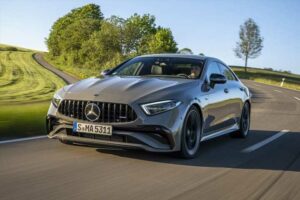 Drift Mode makes it to a CLS, but its appeal is more subtle than silly

Only Mercedes-Benz could make a car like the AMG CLS 53 4Matic+. Not only is the 435hp, electrified straight-six also offered in an E-Class saloon and E-Class coupe, those after a four-door coupe experience that’s like an E-Class but isn’t an E-Class have the AMG GT 4-door to consider. A more expensive proposition, sure, but you get the point – this car is operating in a tiny, tiny niche.

For the updated CLS, the AMG will be the only petrol one offered in the UK, alongside a four-cylinder 300d and straight-six 400d. The 53 very clearly isn’t going to sell in huge numbers, especially with an estimated starting price of £75k, but don’t assume for a second that it’s anything less than another deeply impressive AMG.

It’s certainly prouder of its status with this facelift, the most significant change for the revised CLS being a new grille – specifically the AMG Panamericana seen everywhere else for the 53. Along with the new front apron in black, it certainly lends the big Benz a more assertive front end, though it would still be a stretch to call it attractive in a way you might an 8 Series Gran Coupe. Or even the old S-Class two-door.

The inside is familiar, too, albeit with the addition of the latest AMG Performance steering wheel from the E63. As in that car, what initially looks like the control panel for a rocket launch soon makes a great deal more sense. And, to its credit, works pretty well. Perhaps the more significant issue might be how the racy look jars with the general opulence of CLS, but perhaps that’s just us. It fits in with the carbon trim at least. Anybody hoping for a more dramatic interior overhaul, along the lines of the C-Class, will be disappointed, as those latest MBUX upgrades haven’t migrated here just yet. And – whisper it – that means the interior looks a little old given the relentless pace of Mercedes development. It’s still supremely high quality and functions without fault, yes – just don’t check one out in the showroom and then a C-Class (at half the money) immediately after…

It says a lot about how well sorted the first CLS 53 was that AMG has seen fit to change precious little for this mid-life spruce. Even the E63 had the rough edges of its ride softened off, but not so here. Or at least not to a degree that’s being made publicly known. The CLS fulfilled the criteria of its brief expertly well first time around, and that’s how it remains three years later.

The clever compromise executed here is in balancing the opposing demands of being both a luxury tourer and a sporting saloon. Through its ride, handling, powertrain and configurability, the AMG 53 manages to feel just the right amount of each all the time. In Comfort its plush, refined, and subdued, easing over bumps and whispering through its nine gears. (It’ll even amble up to roundabouts in fifth at 20mph or so, the torque of the EQ Boost from so few revs ensuring it doesn’t struggle.) But the steering remains very nicely done, too, like time has been spent honing its response, meaning you’re never detached like you would be in a more dedicated luxobarge.

Then on the other hand, Sport, Sport+ and the rest introduce some straight-six snarl (very pleasant it is, too), hold gears longer (and punch them through more forcibly), tighten the body control (but not entirely at the expense of comfort) and let the driver embrace a more rewarding driving experience. Okay, Sport+ and Race are probably a tad overbearing – when aren’t they – but Comfort and Sport will cover off all scenarios in the CLS 53, which is the nub of its appeal: there simply isn’t a driving situation where you wouldn’t enjoy being in it. There aren’t many cars that cover every base so emphatically well, from enduring an urban grind to relishing a more committed cross-country drive.

And what of the Drift Mode? Well, it wouldn’t function on the test car despite three separate attempts – draw your own conclusions there – and feels a tad silly in a CLS. Which might be the appeal. Like all these 4Matic+ Mercedes, though, the 53 never feels hamstrung by its four-wheel drive system, being always rear biased in its behaviour – more so than would probably be expected – and laudably entertaining as a result.

Consequently, though it will remain a very rare sight, it’s easy to imagine all 14 of the CLS 53’s buyers being immensely pleased with their purchase. Because although the sweet, swift, spookily responsive straight six is available elsewhere, there’s something about the CLS that really elevates it above the E-Class experience. Much like the GT 4-door when it comes to the V8, it is probably the finest way to enjoy another great AMG powertrain. Thus it’s little short of tremendous.