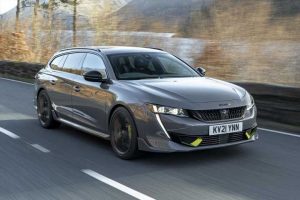 Hybrid 508 gets 360hp and an expansive remit. Good thing it looks the part…

We’re not sure if the pandemic is entirely to blame for the two-year gap between the reveal of the Peugeot Sport 508 and its arrival in Britain. But one thing’s for sure, it looks as brilliant now as it did in those heady pre-pandemic days. Sure, it borrows some details from the 208, but that merely confirms the effectiveness of Peugeot’s latest design language. And anyway, with 360hp the hybrid 508 does more than just win you over with its striking looks. Thanks to its turbocharged 1.6-litre engine and two, yes two, electric motors, it’s the most powerful Peugeot to date.

The four-cylinder unit is familiar from the 208 GTI, a car that Peugeot Sport did terrific things with back in middle of the last decade, with a 200hp output that’s supplemented by the brace of 11.5kWh battery-powered motors, a 110hp one on the front axle and a 113hp one at the back. Consequently, the all-wheel drive configuration is bias toward the nose, and marshalled via an eight-speed automatic gearbox. Combined torque peaks at a muscular 384lb ft, which is 74lb ft better than a BMW 330e.

The 508 wins off the line, too, with a 5.2-second 0-62mph time. Moreover the Peugeot will do 155mph, which would suggest that the petrol engine is doing most of the heavy lifting – but in fact the car defaults to its electrified components where possible, and uses the motor as a booster. Although with electric range confined to 26 miles and 86mph, the latter is a constant presence.

Not that the relationship requires much consideration when you’re driving, because the powertrain is remarkable for its seamlessness and ease of use. Press the start button, and the car will happily choose how to blend electric and petrol power itself, leaving you to enjoy the swish cabin. It is comfortable, feels of decent quality and is pleasingly different to the designs of its many rivals – sporty graphics, intuitive menus and lime green flashes included. The electrically adjusted seat goes nice and low, and the wheel pulls close so expect to feel cosseted.

Visibility is good, though – and before you ask, the flat-top and steering wheel leaves 99 per cent of the 12.3-inch instrument cluster in line-of-sight, with only the odometer reading hidden by the rim. Peugeot’s obsession with small diameter wheel hasn’t always paid dividends, although here it does give the impression of greater agility and compactness. At 4,778mm length in SW format the 508 is certainly not small, so the cabin in turn feels spacious enough, with very good rear legroom and a boot offering 530 litres of space. Add to that the WLTP-quoted 46g/km and 139mpg, and it measures up well enough on the practicality front.

As for the fun stuff, the car gets up and goes every bit as quick as the performance numbers suggest in sport mode, launching off the line without slip and powering up with a linear delivery. Even with your foot buried into the carpet, engine noise is subdued, with its smooth four-pot tone accentuated by electric whine. Ease off the accelerator and the 508 will settle into a cruise either with the engine completely off or, if the battery is low on juice, spinning at low revs. It’s an amenable place to be, although the Michelin Pilot Sport 4S rubber did seem to hiss over certain surfaces. Doubtless 20-inch rims don’t help.

Despite such large wheels, the Peugeot Sport 508 rides well on standard adaptive dampers, which allow for enough vertical movement in comfort mode to soak up bumps and uneven surfaces. Sharper ridges and road imperfections can thud through the strut, but with a rubberised edge to the shock absorption. As such, the chassis feels tight but well judged. Click over to sport and the damping tightens, but only by a modest amount, the benefits of which are only really noticeable when you carry some commitment into a corner. Do that, and the 508 is surprisingly keen, with plenty of grip over both axles and body control primed for quick direction changes.

The elasticity of hybrid power, composure of the suspension and strength of the brakes defies the 508 SW’s 1,875kg kerbweight. There’s Peugeot Sport character in there, too, as evidenced by the car’s willingness to allow mild doses of trail-brake-stimulated oversteer. Not that the manufacturer is suggesting this as a raison d’être; there is an ESC button buried in the menus, but it’ll automatically switch back on after a few seconds whether you like it or not. Not that it really made much of a difference on a warm spring day, with the all-wheel drive traction all but unbreakable and any playfulness best described as fleeting. The 508 is more concerned with feeling positive and swift to react to steering input.

This is all well and good, but eagerness-to-please is not necessarily synonymous with involvement. This is not the fault of the powertrain: 360hp from a petrol-hybrid might not sound deeply thrilling, but the gearbox and power delivery are pleasing enough to interact with. Instead it’s the steering which falls short, with Peugeot conjuring up too little feel from its electric rack. In its defence, there’s no awkward weighting to cloud things; just a fundamental lack of comms with the front wheels. And, as ever, that’s a problem when you’re hoping to appreciate the nuance of a seemingly well-sorted chassis.

True enough, nothing in the immediate hybrid vicinity aces this test. Those wanting a superior level of engagement are better served by traditional models – among them the M340d that currently serves on the PH fleet – although naturally none of these options offer the all-electric range that distinguishes the Peugeot. With that in mind, and as its maker intended, the 508 PSE offers something like a compelling mix even accounting for its dynamic shortfall. Car buyers tend to look kindly on that sweet spot where functionality, good looks and strong performance converge – and the new model has those attributes in spades. Of course, at £55,795 – over £10k more than a 330e xDrive M Sport Touring – it will assuredly need all of them.