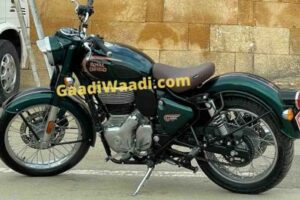 The new Classic 350 uses the J platform that debuted on the Meteor 350.

Royal Enfield is expected to lunch the 2021 Classic 350 soon. Now, the production version of the motorcycle has been spotted without any camouflage.

The spy images show two versions of the Classic 350 – single-seat and split seat. The images reveal the changes that the bike will get, compared to the outgoing Classic 350. The bike retains its classic styling featuring a circular headlamp with a chrome bezel, chrome-plated exhaust, round rear view mirrors and large mudguards. While the fuel tank retains its teardrop shape, it gets new side panels with C-shaped decals. The mudguards get new stripes too. The bike also gets a front seat with better cushioning and a pillion seat with more rounded edges compared to the old bike.

At the rear, the bike gets a reworked tail light and a single-piece grab rail that is placed higher than before. The images also reveal that it will get a disc brake at the front and a drum brake at the rear. The higher variants are expected to get a dual-channel ABS. Royal Enfield has shifted the bikes braking system to the right as well. The bike gets a new instrument cluster with a digital readout and a fuel gauge. However, the pod for the Tripper Navigation system that was spotted in earlier spy shots, has been replaced with a RE Classic badging.

The new Classic 350 uses the J platform that debuted on the Meteor 350. It has a twin downtube architecture and rides on a 19-inch rim at the front and an 18-inch rim at the rear.