2021 Tata Tigor EV teased ahead of its launch 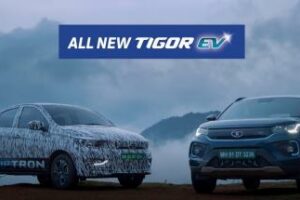 Last month, Tata Motors had launched the XPres-T – a variant of the Tigor EV.

Tata Motors has released a teaser video of its upcoming electric car, the Tigor EV.

The video features a camouflaged prototype of the Tigor EV, alongside the Nexon EV. Both cars can be seen speeding up Kolli Hills, which rises 1,400 meters above sea level. The route consists of 70 hairpin turns.

At the wheel of the Nexon EV is India’s ace racing driver Narain Karthikeyan. As he makes his way up the twisty stretch of tarmac, he is joined by the new Tigor EV.

The new Tigor EV is based on the updated Tigor compact sedan. It features a sharper-looking front fascia with LED daytime running lights positioned on the front bumper. The car uses Tata’s Ziptron powertrain.

Earlier this year, Tata Motors had launched the XPres-T – a variant of the Tigor EV for the fleet market.