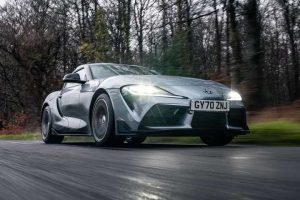 The Supra has always centred on six cylinders – so how does it fare with four?

As always on PH, the comments on Toyota's launch of the 2.0-litre Supra were fascinating – and not a little entertaining. Perhaps the most interesting tangent of discussion, however, was the one seldom mentioned: the not insignificant matter of a sports car nameplate boasting decades of six-cylinder heritage, now offered with four cylinders. There were some dissenting voices, but not many. Certainly not to the level of outrage that the Porsche Cayman when it adopted a flat-four (albeit entirely at the expense of the six) or when the new entry point to the F-Type range subtracted two from the cylinder count.

Which, given how much of the Supra mystique is built on a straight-six, is something of a result for Toyota. Because if the old 2JZ didn't respond to tuning as well as it did, would anyone care quite so much about the Supra? It's why when the A90 launched, Toyota claimed to have delivered a sports car "faithful to Supra's heritage and Tada's mission – a coupe powered by a front-mounted 3.0-litre turbocharged six-cylinder engine driving the rear wheels." Because a Supra has a straight six like a Big Mac has beef. Four cylinders should have the Supraphiles up in arms. But seemingly not yet.

Potential furore averted, what you get with the 2.0 is essentially the GR Supra we're now familiar with – albeit riding on one-inch smaller wheels and with ever so slightly different exhausts. All the drama of the Supra shape has transferred to the four-cylinder; this is no frumpy entry-level alternative. Same goes for inside: the driver sits low and snug, enveloped by an interior and with bonnet cascading toward the horizon. The Supra works nicely as a driving environment, making you feel an integral part of the car before moving anywhere. As for the heavy influence of its build partner, it arguably matters even less now than it did in 2019; not least because the older BMW dashboard is more likeable than the newer version – which gives it an odd sort of appeal in 2021.

Elsewhere, there has surely never been four- and six-cylinder derivatives of the same car as closely related as the two GR Supras. As part of BMW's modular family of engines (the six is the B58, this 2.0-litre four is the B48 and the 1.5-litre three-cylinder is the B38) every engine uses the same 500cc-per-cylinder design, with additional ones added as the installation demands. A point the on-paper stats bear out: peak power in the 3.0 is made from 5,000-6,500pm, which is exactly the same for the 2.0. The larger engine's 369lb ft maximum is from 1,600-4,500rpm; the 295lb ft of this car is produced from 1,550-4,400rpm.

On the road that means very similar characteristics to those found in the flagship. It's an effective rather than a memorable powerplant, a long-stroke slugger preferring to trade on its mid-range than chase every last rev. Say what you will about a Porsche 718's soundtrack, but its comparable 2.0 is a good deal spritelier, a marked improvement in terms of throttle response, lack of inertia and willingness to rev. A more favourable comparison can be found in the F-Type's own modular 2.0-litre unit: the Supra also uses short ratios to heighten the sense of acceleration, and offers a similarly inoffensive growl from the exhaust. Induction noise is notable by its absence.

Whether the cheaper model is fast enough is a tricky question. That's because, on the road, its performance feels spot on, quick enough to excite and entertain without being so accelerative it's a threat. Trouble is the spec sheet argument is harder to make, because this is a 258hp, 1,395kg car that costs £46,000. Hand on heart, a Yaris GR feels a little faster. Which means a similarly priced Alpine or Porsche would, too. And the M135i with which the Supra shares a powertrain. Cars should be bought on the experience, sports cars in particular; it's hard to imagine many 2.0-litre customers being disappointed by the speed on offer here – but spec sheet bragging rights are certainly not its forte.

What buyers should be able to shout about, though, is a reinvigorated driving experience – and from this test, that's absolutely what they'll be doing. The 3.0-litre Supra wasn't bad to drive, by any means, it's just that this one feels like an improvement across the board. The reasons are not hard to fathom: less mass means less work for everything to do, this Supra riding with less tension (smaller wheels probably help) and steering more urgently, its tangible reduction in inertia benefitting every situation. The car is fitted with identical brakes to its six-cylinder sibling, too; with 100kg less to haul down (and they are Toyota's official UK figures, with 1,395kg playing 1,495kg without driver), it stops better than before, too.

Point is, the reduction in weight makes for a much more rewarding Supra to drive, the additional poise and agility imbuing more of a 'sports car' character to the experience. It feels genuinely light (it's actually only 30kg more than a 718 Cayman PDK), flowing with the surface and darting towards bends in a pleasing fashion; the standard (very good) active differential lends precision and composure that the comparable F-Type doesn't offer, too, because a locking diff isn't an option.

Moreover, there are some really nice touches that improve the experience. Sport mode doesn't spoil the Supra, with the damping tightened up nicely, the mid-way setting for the traction control strikes a great balance between grip and slip and the manual mode is just that – it doesn't kick down or change up no matter what. Which is nice.

Which makes the bad bits all the more irksome. Though configurable, the standard Sport mode, largely welcome for damping, steering and gearbox, turns the throttle pedal into a switch; all the performance apparently right at the top of the pedal. Which is never ideal, but especially not when the brake travel is a tad long as well. Given the gearbox is broadly very well done, with snappier downshifts than the 3.0-litre, it's a shame not to feel a bit more connected to the experience – both gearlever and paddles could offer more resistance. Same for the steering: you learn to trust the immediacy off centre and the purchase of the chunky 255-section front Michelin Super Sports, but it doesn't come from the slightly glassy steering response. Sat so far back in the chassis, confidence is key, and there's not a shortfall of it here.

Still, it's a really decent chassis – capable and entertaining in the best front-engined, rear-drive tradition, and is the best Supra to drive Toyota has yet made. Whether that sweeter experience is sufficient to successfully market the 2.0-litre model remains to be seen. Because we all know that stats sell cars a lot more effectively than the subjective stuff; £7k more buys the 3.0-litre and 340hp, which is a significant gain. And those focused on outright handling in four-cylinder sports cars are still better served by the 718 Cayman and Alpine A110. Although the Supra certainly feels a more attractive proposition than a four-cylinder F-Type, for what that's worth.

Will that be enough? Let's see. Because the Supra's imperfections – the obvious charm deficit of six cylinders against four, a drive that can't quite live up to the segment's best – shouldn't unfairly detract from its overall appeal. The new entry-level model is a really well sorted sports car, as well as a handsome, well-built, refined two-door coupe. In isolation it's impressive and really rather likeable, scoring higher on both counts than you would have initially thought possible. Whether it will still seem that way when measured against a direct rival, we aim to find out in short order…