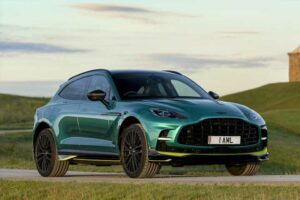 Given the time already spent behind the wheel of the new DBX707, your mind is likely made up about the most powerful series production Aston ever. You’ll either like it – and, more broadly, the super-SUV genre as well – or you will not. They’re not the sort of performance cars that enthusiasts are ambivalent about. Those not keen won’t have their heads swayed even if this DBX707 claimed to rewild the Amazon rainforest, single-handedly saved the company and made the driver look 10 years younger – it’s that sort of car. On the other hand, those who liked the sound of what they’ve heard should keep reading. Sardinia and Silverstone feel like easy places to make a favourable impression. If the new model works well in the UK, Aston might just be onto something.

Before going anywhere, however, you’ll have to approach and get in a DBX707. “I have to quietly admit to liking the way it looks” read Mike’s drive story; “The standard DBX is a very elegant SUV, but the DBX707 has burst that bubble with all sorts of sticky-outie protuberances” was John’s take on the design upgrades. Talk about divisive. Darker colours seem to suit the 707 better, as the brighter, racier colours jar with what is ultimately an enormous car, but there’s undoubtedly visual impact. Along with much improved aerodynamic performance, that was most likely the point. Look at what’s popular in the segment for proof of where impact gets you.

There’ll be no such deliberation for the inside – it’s simply not good enough. Whatever update is coming for the Vantage, DB11 and DBS must make it to the DBX, because asking £200k for a car with graphics this dull, an interface this sluggish and menus this confusing is crazy. A Jaguar F-Pace SVR at half the money has a vastly better interior than the DBX. Smartphone mirroring will help owners, but even that is limited without touchscreen capability, control being dependent on the maddening old Mercedes trackpad. There’s only so much beautiful materials and some lovely details can offset a cabin this far behind the best.

Thank goodness, then, that the DBX707 is so utterly glorious to drive that it’s almost possible to overlook the flaws. It’s not just great to drive for an SUV, or great to drive for an Aston Martin – it’s great to drive, full stop. Even driving regular UK roads on a Wednesday afternoon. This car isn’t going to take special circumstances to feel very, very special indeed.

Both steering and ride stand out immediately. There’s no way a 2,245kg car on 23-inch wheels should ride this well – it’s genuinely staggering, and a testament to the extensive chassis revisions included over the standard DBX, all designed for the bigger wheel. The plushness, suppleness and calm you’d expect of a flagship Aston Martin don’t come at the expense of the tautness, precision and control that the world’s most powerful super luxury SUV has to have. Crucially, too, cranking up the 707 through the standard GT setting to Sport and Sport + doesn’t tarnish the ride, even if the more aggressive mode for the steering isn’t quite as successful. But rest assured the standard setting is just about perfect for weight, response and accuracy.

There’s not a comparable SUV out there that rides and steers with such quality, and it proves how crucial those elements are to enjoying a very powerful driver’s car. And that’s after having driven to the launch in a Cayenne Turbo GT, too. Interestingly a Nurburgring time to beat the Porsche, as hinted at by former CEO Tobias Moers, hasn’t emerged – make of that what you will – but a DBX is hugely enjoyable as a road car. Which we all tend to travel on a little more than the Nordschleife.

It’s so likeable, in fact, that if Aston’s first EV drives like this there’d probably be no qualms about the powertrain, because the overall experience would be sufficiently satisfying. But this is not an electric vehicle – it’s powered by a 707hp version of one of the great turbocharged V8s, and its presence is exhilarating. There is some lag, but that only serves to make the physicality from a few thousand revs even more awe-inspiring. Without wishing to repeat too much of what’s already been said, the V8’s roar betters anything that AMG has done with this engine, and the shorter final drive makes acceleration deliriously rapid. True, the gearbox isn’t really competitive: going up is fine, but downshifts are sluggish and the auto mode is never quite perfect. That said, those that love fire and brimstone V8s (and who doesn’t, frankly) will adore the 707. It’s hard to think of a more persuasive powertrain in the segment, even allowing for some sharper gearboxes out there.

With steering and ride that makes the DBX feel smaller than it actually is, and a monstrous engine that makes good on the performance claims, miles become memorable in a 707. It can be driven with such confidence and accuracy – not always the case with cars so vast – and which the modifications ensure it’s more than capable of. The brakes deserve special mention, too, with epic performance lurking in a slightly-too-long pedal. Without having driven a standard DBX it’s obviously impossible to draw a comparison with what’s gone before, but the ability of the 707 to combine everyday amenability with genuine thrills is a captivating compromise.

There’s not an environment it doesn’t suit. Maybe low speed isn’t its forte, with the odd thump from those giant wheels, but it’s very far from unacceptable. It’s a superb motorway cruiser, nimble on narrow lanes, expressive and entertaining with a little more space and always a pleasure to be behind the wheel of. Mike liked it on track, John hinted at its potential as a road trip car, and this experience has only solidified the impression of the DBX as the consummate Aston all-rounder. With 700 mellifluous, magnificent horsepower. As the conventional super saloon makes way for monster SUVs, so this DBX delivers just the kind of experience we’d expect from a flagship fast four-door: stupendously fast, superb to drive in all situations and (mostly) a pleasure to be in. Put it this way: the Rapide never drove this well.

Probably that’s the key takeaway from a day behind the wheel. A lifetime could be spent sweating the numbers, comparing vital stats and pitching one SUV against another – but black and white figures can’t convey the richness of a multi-layered driving experience, and that’s what time with 707 emphatically delivers on. After the best part of 200 miles behind the wheel, with some brilliant minutes but many more tedious ones, the desire to drive it some more never abated. And not just because of that monumental engine, or because it’s an Aston, or because it isn’t a Lamborghini Urus. The DBX707 is simply one of the best sorted driver’s cars – SUV, sports cars, supercar- out there. And we didn’t do more than 70mph all day. Much.

But – and there’s always a but with an Aston Martin – the 707 does enter a fearsomely competitive sector. The Cayenne Turboo GT is not much less exciting to drive, equally as fast, probably quicker around a circuit if that matters, cheaper and with a better interior; a Bentayga V8 S isn’t quite as absorbing to steer, but is on another level for opulence and sense of occasion; and don’t forget there’s a new and improved Urus Evo imminent as well. With the interior as behind the times as it is, the 707 probably doesn’t shoot to the top of the class as the ultimate super SUV – although for those that place the driving experience above all else, this must be the first port of call. Don’t be surprised if that’s all the decision making needed.