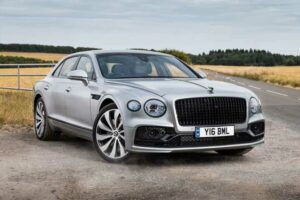 The new plug-in Flying Spur is a familiar solution to electrification. But is it still a proper Bentley?

I have an interesting tale, I think. You’ll be the judge, of course. It’s from my days selling Bentleys. I was at the Crewe factory back in 2003, with a customer who was being shown around because he was looking to buy a new Arnage R. That was around the time the Continental GT was launched, and there were a few customers on the same tour looking to spec those, too. After we’d spent a good hour or two being walked and talked along the Arnage line, with our Crewe host displaying unremitting tenderness for everything involved, we went to the GT line.

That tour was basically, “Right, the bodies come in from Germany there, some bits get fitted here, then they’re sent out the door.” That was it. Over. In less than 30 minutes. One of the guests (read prospective GT customers) said, “Excuse me, but we spent a lot of time on talking about the Arnage but very little on the GT, why’s that?” The Bentley man raised himself up like a heavyweight squaring up for a fight, and boomed, in a Crewe twang: “Let me tell you something. There are two companies here. One is Bentley, and the other one is VW. And I work for Bentley.” Well, you could’ve heard a pin drop – in a Bensons for Beds showroom.

I mention this because, while there was a lot of criticism of Bentley’s VW-parts-bin association in the early days, since it’s been aligned with Porsche both the current GT and the Flying Spur have blossomed. But is this Bentley Flying Spur Hybrid a retrograde step? Can a Bentley with a 2.9-litre twin-turbo V6 and plug-in hybrid power really muster the depth character that a Bentley should, and its customers demand?

Six-cylinder Bentleys are nothing new, of course. It’s what the company’s reputation was built on. The mighty Speed Six became the most successful racing Bentley of its time, winning Le Mans in 1929 and 1930 driven by the good old Bentley Boys – Tim Birkin, Glen Kidston and Woolf Barnato. Indeed, we covered the recreation of it just a few weeks ago. But there’s a big gulf between a large-capacity straight six and a buzzy little vee six. And that’s before you contemplate the electrical element. Get used to that, though, because soon internal-combustion Bentleys will be as easy to come by as its recreations.

Switch it on and the Flying Spur defaults to gliding away serenely as an EV. I found myself thinking this rather bolstered the Bentley’s cosseting credentials; it’s quite soothing in terms of noise. But then came a whiff of clumsiness from the transmission with the occasional shunt at very low speeds. Once it’s up to 30mph or so it’s smoother with enough motivation to carry you quite effortlessly around town and spur the Spur (glacially, it has to be said) up to 87mph. You don’t have to press the accelerator very hard to wake up the V6, though. Is it buzzy? Yes. It doesn’t sound very ‘Bentley’ to my ears, but the world changes, and, if you don’t change with it, that way madness lies. It’s not just a Bentley thing, either. I’m not a huge fan of the noise this engine makes in the Porsche Panamera 4S E-Hybrid, which is the car that the Flying Spur PHEV is based on. It’s not raucous or undignified. It’s just not a very characterful motor, in the way that the Flying Spur V8 is.

The transition between the two power sources is slick with just a light tickle of the accelerator, but more brutal under full torque demand. When you slam the accelerator down hard, needing a quick burst of acceleration, there’s a lurch as the gearbox sorts itself out and the mild electrical thrust is usurped by the prodigiousness of the V6. The good news is there’s prodigious pace. The combined 544hp, derived from 416hp from the petrol engine and 140hp electric motor, gives great speed that’s all but a match for the V8. To stick some numbers on it for you, sixty from rest is reached in 4.1 seconds, which is a tenth behind the eight-cylinder Spur. In anyone’s book that’s quick for a limousine. And surprising, considering this car weighs over 2.5 tonnes. Then again, there’s as an overabundance of torque to do the heavy lifting. 553lb ft is the system total. With the engine’s peak pull arriving at just 2,000rpm, and the electric motor filling in the gaps below that, it’s got old-school Bentley levels of effortlessness.

The handling isn’t very Bentley, though. Well, not if you’re used to the characteristics of an SZ Turbo R. There’s nothing wallowing or detached about the Flying Spur, even with its 175kg weight penalty over the V8. By God it’s composed and lithe on country lane, seemingly undeterred by undulations that you’d think would have it bucking like a mule on hot coals. But no, it’s very capable, and made even more so by the steering. Aim the Flying Spur at a corner and it follows your line faithfully. There isn’t much sensation, granted, but the steering’s hard to fault in any other regard and totally intuitive from the off. Is the Spur fun at the limit? No, but does it really need to be? I can’t see many people fretting that it’s set up to fall into understeer when all the grip has been used up. Mainly because there’s so much grip to use up before the front start to scrub, so it’s devastatingly good at devouring cross-country miles.

Initially, some might find the ride a bit firm. It’s certainly not as supple as the new Range Rover I swapped for the Bentley with Cackett earlier in the day. It’s much tauter than that or a Mercedes S-Class. This would be an issue if it crashed and walloped over potholes, but it doesn’t. You feel them, sure, but this isn’t a punchy-riding car. And, because it’s so well damped, it’s not constantly jostling you either. The engineers haven’t simply been softened it off to make it seem comfortable. It is comfortable. It has what I’d describe as a sophisticated ride.

It’s also very quiet. How that is the case, when you consider the behemoth tyres – a pair 315/35 21 Pirelli P Zeros at the rear – I don’t know. There’s very little road roar – the only time you hear some is when the surface is especially gritty – and just a light flutter of wind noise on the motorway. Even this is soft and unobtrusive. The only thing I dislike is the brake pedal. Just like the Panamera E-Hybrid, it’s not totally consistent – you can feel the regen undermining its feel under foot. Not horrendously, but noticeably.

The interior is a smorgasbord of sumptuousness, put together with attention to detail that can be described only as exacting. The material quality is also high. While everything that glitters in here is not gold, it is, in the main, highly polished chromed metal, or a very good imitation of it. For me that is important. If you are charging first-class prices you have to deliver first-class quality, and that is what you get. It makes the S-Class feel business class at best. Mind you, if you’re expecting softly padded wingbacks to sit on, you’ll be disappointed. The leather is supple but the padding underneath quite firm, which may not suit everyone. Then again, you can mould the seat electrically in many ways and run through the numerous massage functions to ease away the stresses of the day.

It is quite fabulous in the rear. I am a lanky sod and there are very few cars, this side of a Phantom, where I feel truly comfortable sitting in the back. I’m not just talking headroom or legroom, either. I mean in terms of the foot space under the front seats, as well as the shape and position of the rear bench. The old BMW 7 Series, for instance, left you feeling quite perched in the rear, and the current Audi A8’s not much better. The Flying Spur is spot on. Enough space, a very comfortable seating stance, and yet more high-end materials on show. It’s exquisite.

As you can tell, then, the Flying Spur Hybrid is a very good machine. A great Bentley, in fact, in all but the engine’s slightly underwhelming noise. Ultimately, yes, the V8 is a richer experience with its more characterful soundtrack. I’m sure that’s not breaking news to anyone reading this. I do wonder though who will buy the PHEV with any logical reasoning involved? It’s in the 20 per cent BIK band, which is a saving – but it’s not like the 25-mile official range from its 18kWh battery is going to save you much in fuel. And even if you do just trundle from Harrods to Harvey Nics in EV mode each day, the 351-litre boot is 70 litres smaller than the V8’s. Actually, it’s smaller than a Golf’s. Perhaps then it’s more for those that like the sensation of being stared at in a Bentley, but not glared at for ruining the planet. Does that make it a little cynical? Maybe. But as a dipped toe in the water of Bentley’s to come, reassuringly good, too.