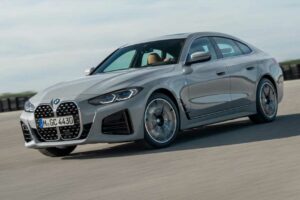 With every BMW variant released with a plus-sized grille, the brand seems to be asserting that its new styling direction is no momentary aberration. The 2022 BMW 4 Series stays the new course set by its two-door 4 Series siblings, which is to be expected. After all, the hatchback remains most notable for the differences around its sides and back, not its face. Otherwise, the 4 Series Gran Coupe mostly resembles its coupe and convertible siblings in terms of overall size, powertrain options, and features.

This is the second generation of the 4 Series Gran Coupe, and this time around it’s less difficult to tell at a glance what it is. The previous car, to an untrained eye, looked quite sedan-ish unless the power rear hatch was opened. This changes for 2022.

The 4 Series Gran Coupe’s distinct styling is most evident when you compare its profile with that of the 3 Series sedan. The arc of the roofline to the much squatter rear deck is more crossover-esque—there’s more X4 in its design and proportions than the more traditional 3 Series. The greenhouse appears much lower, and less upright, than the 3, too. And the garnish on the fender and lower door creasing is significantly different. It’s a bold, assertive look that provides a bit of contemporary angularity, which visually ties it more closely with the 4 Series coupe.

Mechanically, the Gran Coupe is essentially a twin to the two-door 4 Series models. Returning for duty is a 2.0-liter turbo I-4 in the 430i that is good for 255 hp and 295 lb-ft of torque; the M440i packs a turbocharged I-6 that makes a healthy 382 hp and 369 lb-ft. The M440i also gets a 40-volt mild-hybrid system consisting of a starter-generator unit that offers up to 11 hp of additional assistance.

Both engines are backed up by an eight-speed automatic transmission. The M440i will launch with BMW’s xDrive all-wheel-drive setup, while the 430i will launch as a rear-drive model. Look for BMW to offer the 430i with AWD  and the M440i with RWD in the near future.

BMW’s Adaptive M Suspension option is available on both versions of the 4 Series Gran Coupe at launch, and all models feature load leveling on the rear suspension. The brand’s torque-vectoring M Sport Differential is standard on the M440i and optional on the 430i, where it’s available as part of the Dynamic Handling package that also adds various M Sport bits and 19-inch wheels and tires. The M440i also gets a host of M Sport bits (brakes, sport suspension, an M steering wheel, and 18-inch M wheels).

Infotainment duty is handled by iDrive 7, with a 12.3-inch screen taking the place of a traditional instrument cluster. The digital cluster is standard on the Gran Coupe, a notable point of differentiation between it and the 4 Series coupe, which offers it as an option for 2021.