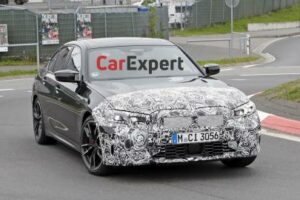 The camouflage further indicates a bunch of subtle yet noticeable cosmetic updates at both ends.

BMW is said to be working on bringing in an update to its M340i version. The 2022 BMW M340i based on the seventh-generation iteration of the 3 Series (G20) has been spied testing near the Nurburgring Nordschleife, Germany.

While the front and rear ends of the BMW M340i facelift have been camouflaged, it can be clearly seen that the upcoming model will feature the conventional size grille at the front. The camouflage further indicates a bunch of subtle yet noticeable cosmetic updates at both ends.

Specifications of the 2022 BMW M340i are yet to be revealed, however, the sedan is expected to carry forward the same engine and transmission options as the current version.