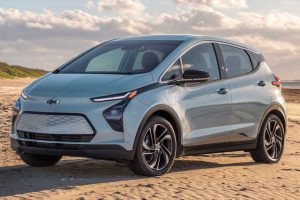 The Chevrolet Bolt EV, if you noticed it at all before, was a homely little electric hatchback. Neither here nor there, really—just a generically styled, Chevy-badged tall hatch. In other words, inoffensive automotive wallpaper. Looks were never the point because the Bolt delivered where it counts for EV customers: It was the first truly affordable “long-range” electric car, and it beat Tesla’s long-promised affordable Model 3 sedan to market. We named the impressive 238-mile Bolt EV our 2017 Car of the Year, and the game was supposed to be done changed by this pioneering Chevy.

Surprise! The Bolt made a little hoo-rah go-America impact, for sure, before being immediately overshadowed by Tesla’s Model 3, which arrived at long last with more range, a bigger price tag, and decidedly not-homely looks. The Model 3 didn’t win our Car of the Year award when it competed for the title the following year, in 2018, but it was a finalist. And it clearly had more appeal than the Bolt, as buyers have flocked to the Tesla in droves. So, clearly this heavily revised 2022 Chevrolet Bolt EV would right the original’s wrongs …

You may not have read any of the words above, and instead were gazing confusedly at the photos of—yep, that’s it—the 2022 Bolt EV. Let us be frank: We agree. The Bolt EV’s sharper-edged styling is certainly more extroverted, but that may not be such a great thing. Mostly, it’s because the Bolt’s basic body structure carries over unchanged, so all those funky new stampings and odd black-plastic eyeshadow is applied to the same chubby, vaguely egg-shaped canvas as before. We’ll stop short of calling the result ugly, and leave it at a missed opportunity.

The styling is a whiff because the Bolt EV continues to nail the basics, now even more so for 2022. This comes even as it sees its appeal chipped away by another Chevy, in the form of a taller Bolt EUV crossover alongside the 2022 Bolt hatchback. With customers clamoring for SUVs—both gas and electric—it seems the Bolt now faces pressures from its own house in addition to from outside actors such as Tesla. Anyway, the Bolt’s estimated driving range per charge is unchanged from last year and remains an impressive 259 miles. Its electric motor is juiced by a 65-kWh lithium-ion battery pack embedded in the Bolt’s floor (hence the tallish-appearing body—the cabin sits atop the battery cells).

On the life-with-an-EV front, Chevrolet also will cover the “standard installation of Level 2 charging capability” in the homes of eligible customers who purchase or lease a 2022 Bolt. Also, a new Dual Level Charge Cord, as Chevy is calling it, is now available on the Bolt. It has a switchable plug setup for quickly adapting to a 110-volt household outlet or a 240-volt outlet for Level 2 charging at up to 7.2 kW. The Dual Level Charge Cord is actually capable of up to 11 kW on a Level 2 charger, but Chevrolet says that requires dedicated charging equipment. DC fast-charging capability (included), allows the Bolt to be recharged quickly; users can add 100 miles of driving range in 30 minutes, according to Chevy—and the nationwide network of eligible chargers continues expanding.

Chevrolet thoroughly warms over the 2022 Bolt’s interior, adding a new 10.2-inch touchscreen for the dashboard and fitting new pushbutton transmission controls on the center console where the previous model’s shifter lived. The original Bolt’s steering-wheel paddle for adding extra regenerative-braking remains. Only now, there is a button for maintaining a so-called one-pedal driving mode even after shutting the car off and turning it back on; this enables the driver to effectively bring the Bolt to a halt simply by lifting their foot off the accelerator, no touching the brake pedal required.

The seats are redesigned and feature contrast-color stitching. They face a dashboard and door panels with a markedly less downmarket appearance than the outgoing Bolt’s pieces. A new flat-ish-bottom steering wheel wears darker trim, as does the rest of the Bolt’s interior. There’s also a sleek-looking new black Chevy bowtie logo.

Beneath the curious styling, fresh cabin, and other improvements, the Bolt EV is mechanically the same as before, right down to its punchy 200-hp electric motor powering the front wheels.

It isn’t often that a car, electric or otherwise, gets better (looks notwithstanding) and ultimately costs less than before. The 2022 Chevrolet Bolt EV has pulled off that neat trick, but given that General Motors has promised to work toward selling only electric vehicles by 2035, we figured the Bolt would take a bigger step forward in surface-level appeal to help the automaker along in that goal. As it sits, the Bolt should satisfy, but it may not scintillate. And for more on its electric SUV stablemate, the Bolt EUV, head here.