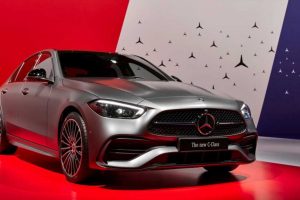 A new Mercedes C-Class usually puts the automotive world gespannt wie ein Flitzebogen (that is to say, “on the edge of its seat”), as generational changeovers tend to bring major transformations. And that’s exactly the case with the completely redesigned 2022 C-Class, the three-pointed star’s newest compact luxury sedan. It’s all new from soup to nuts, and it might already be causing headaches over in Munich and Ingolstadt.

Why so aufregug? Beyond the fact that the outgoing car was the first C in a long time—maybe ever—to feel like a proper Mercedes, this newest C-Class is essentially a shrunken 2021 Mercedes S-Class. While that might sound like the typical German automotive copy-and-paste job, the new S packs so much new luxury and tech that it didn’t just move the goalposts forward, it punted them into next week. The 2022 C-Class looks to bring a similar approach to bear in its segment.

There are large changes everywhere, but let’s start with the exterior. Being a redesign, the W206 C-Class shares virtually nothing with its predecessor, the W205. The S-Class-aping sheetmetal is totally fresh and the new C is now longer, lower, and wider than the version it replaces; when specified with the AMG Line package you see here, it really is quite handsome. The wheelbase has been stretched by an inch, too, which should grant more room to rear passengers as well as impart greater stability at high speed. The headlights are squinty LED units, the grille is larger than before, and the whole car has a more elegant look to it. As you’d expect, the rear takes its cues from the S-Class, including the chrome exhaust finishers and taillights that extend from the rear fenders to the trunklid.

In the U.S. market, just one powertrain will exhale through the aforementioned exhaust garnishes, a new 2.0-liter turbocharged four cylinder with a mild-hybrid setup (that’s EQ Boost in Mercedes speak) with an integrated started generator (ISG). Together, the engine and EQ Boost system combine to make 255 horsepower at 5,800 rpm and 295 lb-ft of torque from 2,000 to 3,200 rpm. Nominal horsepower is exactly the same as the current model—the electric motor can increase total output by up to 20 horses for short periods, however—while torque is up by 22 lb-ft. This version will carry the C300 badge. Europe will offer multiple variants of turbo four-cylinder C-Classes, including a C180 and C200, among others, as well as diesel models, but those won’t reach our shores.

Power is routed through a new nine-speed automatic that’s said to be 30 percent lighter than the unit it replaces; output is then routed to either the rear or, on 4Matic models, all four wheels. The new C is said to run from zero to 60 mph in 5.9 seconds regardless of the number of driven wheels. Mercedes excised the previous C’s six-cylinder engine from the lineup because it says the extra torque from the EQ Boost means drivers likely won’t notice a difference between this slightly punchier I-4 and the old V-6. Mercedes also estimates efficiency gains of 10 to 15 percent, but official fuel-economy ratings aren’t yet available from the EPA. In addition, a wagon variant was launched alongside the sedan, but we will once again be denied the coolest and most useful version of the C-Class. Boo.

Mercedes won’t confirm whether a new C43 AMG will once again serve as the stepping-stone model between the workaday C and the maniacal C63 AMG, but if it does, expect four-cylinder power. The same will be true for the next C63, which will combined the four with hybrid hardware to deliver a proper level of grunt—so, yes, that means the V-8 is seemingly out. Should that come to fruition, know that AMG can already squeeze huge horsepower from a nonhybrid four-cylinder engine, so electrification is likely to provide a pretty hefty bump. Even so, we’re going to miss the C63’s sledgehammer rumble.

Electrification is in full swing at Mercedes, but don’t expect to see an EV version of this C-Class, as Mercedes didn’t want to compromise its packaging to fit the necessary batteries. The brand does have plenty of EQ-branded electric models on the way, though, as well as the current EQC crossover.

Not much space in the press materials is given over to the C’s actual chassis—you know, the thing that allows it to handle and steer and stuff—but Mercedes does reveal that every C gets active dampers, a new four-link suspension up front, and a multilink setup out back. AMG Line cars get a “sport suspension,” which is to say a stiffer tune.

The C300’s Gooey Insides and Technology

Hop inside the new C, and the first thing you’ll likely notice is the new, 11.9-inch infotainment display that dominates the center stack. Tilted six degrees in the direction of the driver, the screen controls most of the car’s functions and serves as a primary interface with MBUX 2, Mercedes’ clever—if not somewhat convoluted—infotainment system. A 12.3-inch digital instrument cluster sits ahead of the driver and can be customized to show whatever information the driver prefers via Classic, Sporty, and Essential modes.

While it’s not specifically the exact same 30-inch AR setup from the S-Class, the C-Class’s trick HUD can display navigation directions as though they’re floating above the road ahead. A fingerprint scanner in the center console allows various users to log in to MBUX for easier access to their preferences and settings, various music-streaming are fully integrated into the infotainment, and over-the-air updates will keep the system running on the freshest software version.

Naturally, the new C-Class incorporates plenty of driver-assist and safety tech, too. Among them, Mercedes’ long-serving Distronic radar cruise control adds the ability to react to a stationary vehicle while traveling at speeds of up to 62 mph. In addition, active steering assist helps keep the car in its lane at speed of up to 130 mph—useful in Germany, not so much in the U.S.—but has also been upgraded to use the 360-degree camera system to detect additional lanes, to perform better and be available more often on bending two-lane roads, and to better maintain the center of your lane on the freeway. We’re keen to try out this new version, as Mercedes’ lane-keeping tech has always allowed a bit too much ping-ponging between the lines.

V2V—that’s “vehicle to vehicle”—technology can allow C-Classes to “talk” to other V2V-equipped vehicles and alert them of upcoming hazards, road conditions, and the like, although this feature is likely to be of more use—or perhaps even only available—in other markets. Finally, the optional Driver Assist Package includes with Pre-Safe Impulse Side, a feature that inflates the seat bolsters in order to push the driver or passenger away from the doors in the event of an imminent side collision.

The new 2022 C-Class appears to take what was so successful about its predecessor—handsome looks, a high-quality interior, and of-the-moment technology—and cranked them up. The C300 and C300 4Matic will land in the U.S. early next year at prices yet to be revealed, but expect to pay a modest increase over the current entry point of roughly $42,000.