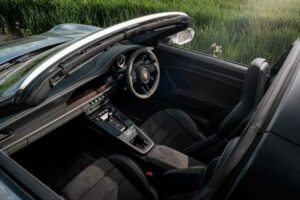 The range-topping Carrera wants to be all things to all drivers. Assuming they like a Targa

What to make of the 911 Targa in 2022? Well, it’s hard to imagine another manufacturer going to the trouble of building two different versions of a convertible. Especially the version which owes its existence to a decades-old legislative quirk, and requires a sizeable engineering lift to produce. But no manufacturer regards its own back catalogue with quite the same rapt attentiveness of Porsche, and it’s safe to assume that the Targa has generated a loyal following over multiple generations – even with its original reason for being reduced to hazy memory.

If the model is itself something of conundrum, the existence of a GTS variant borders on total mystery. Porsche has traditionally used the letters to signify a harder-charging 911, and the most recent badge-wearers (in both RWD and AWD format) have certainly conformed to type. We rather like them, which is a good thing for 992 buyers, because for the vast majority it is as close as the manufacturer will let them get to buying a brand-new 911 with the letters G and T arranged in such close proximity.

But it’s hard to imagine your typecast Targa customer seeking out a leaner, meaner brand of open-top sports car. Which probably accounts for Porsche’s decision to not build them one. It takes about a nanosecond behind the wheel of the Targa 4 GTS to clock its softer chassis settings, and there’s a good reason for that: the car does without the 911 Turbo-derived, 20mm-lower suspension that distinguishes its stablemates. Instead you get the 10mm-lower PASM setup already available on the 4S variant, albeit with the helper springs at the back.

On paper this only serves to enhance the car’s status as something of a head-scratcher – but, in truth, you’d need to be a particularly fanatical sort of helmsman not to concede that decision makes sense in the real world. Neither version of the GTS coupe we’ve driven recently was quite able to make it down a British high street without subjecting its occupants’ jowls to a lively jangle; a forgivable trait in a hard-fired sports car, less so in a 911 built chiefly for summery touring and, let’s face it, showing off.

Even if you’re disinclined to do either, it does make the flagship Targa very easy to get along with. Not just in town, either. With the handling-versus-comfort compromise wound back in favour of the latter, the car makes a better fist of very uneven B roads, too. Abrupt changes in gradient had a tendency to fluster the coupe’s rigorous vertical stiffness; the bit more latitude afforded to the Targa is the difference between a few grin-and-bear it moments and none at all.

The improved output is easily absorbed, too. Here at least there is no change: the Targa gets the same 480hp as the rest of the GTS lineup, and, with the eight-speed PDK doing its impeccable thing, Porsche says it’s good for 0-62mph in 3.5 seconds – 0.3 seconds quicker than the 4S, though marginally behind the all-wheel-drive coupe. The chief reason for the difference, unsurprisingly, is weight. The Targa is actually quicker on paper than the manual, rear-drive GTS, but is 175kg heavier.

Now, this doesn’t prevent it from seeming fast. Or even very fast. Sure, the Targa forfeits a few atoms of impetus compared to its lighter siblings – most notably on leisurely throttle inputs – but, generally speaking, the difference is as marginal as the numbers suggest. As we’ve discovered elsewhere, Porsche’s top-spec turbocharged 3.0-litre flat-six is generous to a fault: responsive, fast-revving and, thanks in no small part to its transmission, virtually imperturbable no matter where you choose to engage with it in the rev range. The Targa waylays it fractionally, but not harmfully.

As you can imagine, for much of your day this willing combination of lusty shove (complemented by a beefier sports exhaust) and tolerant chassis is going to work out just fine. The model retains several idiosyncrasies – not least a tendency to generate an ear-buffeting squall at around 40mph with the roof down – but most of these you can drive around without them turning into legitimate frustrations.

The problems, such as they are, exist at the margins of the Targa experience. Or, more specifically, at either end of the performance scale. Firstly, the very slow. Stationary, in fact. Because that’s the way you still need to be to operate the car’s hugely complicated hood, a gyratory swirl of motors and glass which is pitifully short on elegance and, when sat at traffic lights, chronically long on time.

Granted, there is no complaint more excruciatingly first world than a ponderous convertible mechanism, but for a manufacturer traditionally besotted with streamlined functionality, the Targa solution Porsche introduced with the 991 remains conspicuously unlovable. It is also a hulking reminder of where the model is required to carry so much of its additional mass. And while the GTS is remarkably adept at keeping this burden in check, there are inevitably moments where the repercussions make themselves known.

For the most part, and for most owners, this will occur under braking. The GTS spec buys you the uprated brakes from the 911 Turbo, yet even endowed with greater stopping efficiency, there is perceptibly more bulk that needs marshalling at junctions. The Targa doesn’t necessarily strain to do it, but the insistent feeling of greater forward momentum isn’t a significant factor in the coupe – which makes it all the more noticeable in the open-top version.

It’s a similar story if you choose to push on with serious intent. In isolation, the model is entirely fine. Massively adhesive, communicative, relentlessly proficient – if you’ve not driven another GTS, you’ll almost certainly revel in it. But take a coupe for test drive and you’ll notice that it conveys a level of handling clarity that’s beyond the heftier, springier Targa. Which doesn’t mean that it won’t confound your expectations in a corner – it can and will – it’s simply because the open-top version is limited by various dynamic compromises, and the conventional GTS isn’t. Beyond eight-tenths, the lower, lighter, flatter coupe is as wieldy as a rapier’s point. The Targa settles for the convenience of a multi-tool.

Should you care about the shortfall? Well, that rather depends. Obviously if you’re buying a Carrera GTS for its heightened GTSness, then yes, you probably should. If not, you could persuasively argue that the shortfall in nth degree finesse – as Porsche decreed with its chosen chassis configuration – isn’t really relevant to the traditional Targa experience, and drive away very contentedly.

The only niggle there is that it does return you to the perilous question of positioning. A regular Targa 4S is, after all, £11k cheaper, and only 30hp down on power. A rear-drive Carrera GTS Cabriolet is £5k cheaper, furnished with the same headline output and will pop its much simpler (i.e. better) roof up on the move. As likeable as it is, you’d have a tough time convincing anyone of the flagship model’s premium-justifying superiority in either case.