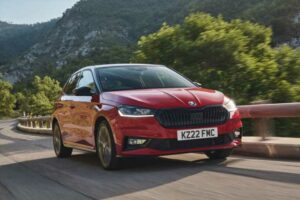 Not an obvious choice, but it turns out the Monte Carlo qualifies as that rare thing – a likeable warm hatch

Before you stop reading, stop. By which I mean please carry on. Reading. Yes, I know what you’re thinking: “It’s a Skoda Fabia. Pah!” and “Not even a vRS.” But hold your horses. This is a surprising little car and I have the actual proof: it surprised me. I wasn’t expecting a lot from it either, I’ll admit, but I used the Fabia Monte Carlo to head up north last weekend, to Nottingham, and 300 miles later I am, well, a fan. It’s a cracking little car. That makes it interesting, and interesting cars are what PH is all about, so I’ll continue. I hope you will, too.

I am not getting carried away, either. It’s not a sparkling hot hatch in the mould of a Fiesta ST. Of course it isn’t. But if you’re looking for something a little less frenetic – a day-to-day runaround with some welcome zip – it’s very apposite. For a start, 150hp qualifies it for the role. There was a time when 150hp in a car this size would’ve dropped more jaws than an H-bomb, but these days you need another 50hp to join the big (little) boys’ hot hatch club. This isn’t pretending to be in that class, but 0-62mph in 8.0 seconds makes a Fiesta 1.0 Ecoboost 125 ST-Line look like a G-Wiz, and the Monte’s 1.5 TSI Evo EA211 engine is so tractable. As long as you’re the right side of 1,500rpm it oozes torque and scampers away keenly.

Admittedly, there are two areas where it doesn’t shine. Firstly, it’s not a tonally invigorating engine. Most of the time it just makes some noise. And because that noise is neither fruity nor foul, it comes across as dull until you get up at the last knockings of the rev range. That’s when it becomes coarse and scratchy. Not wincingly bad, but not as pleasant as an Ecoboost triple at full chat. Secondly, there’s the gearbox. It’s not a manual, which means I’m about to lose another slice of the audience. Stop. Do keep reading. A six-speed manual is available, but only if you choose the 1.0 TSI. The bigger engine is coupled only to a seven-speed DSG, which is fine at flitting through the gears when cruising, but jerky in stop-start traffic and not convincingly responsive when you kick it down. Plus there aren’t any paddles behind the steering wheel to change gear manually. Even for a warm hatch that seems like a heck of an oversight to me. Silly Skoda.

So far, then, we have decent performance and driveability, but an insipid engine note and gearbox. If my maths is right, that’s nil-nil. But when you start exploring the chassis the win is back on. I imagined this was going to be a lacklustre bundle of understeer and poor body control, most likely twined with an unpleasant, washboard ride. Yet the truth is quite different. They tell me that the suspension is unchanged from other Fabias, yet the last Fabia I drove was soft and squidgy. Here, the springing feels taut but not over-tightened, so the Monte doesn’t roll too much and still breathes with the road. I mean, I’m not talking Huracan Performante levels of damping, here – but whatever trials and tribulations are thrown its way, the Monte’s suspension deals with admirably. It means you can attack a road with conviction, safe in the knowledge that it’ll hold a line. It grips well, too, and when you run past the front tyres’ toe hold it’s so nicely balanced that a little lift it trims the line neatly. When you need the brakes, the pedal is stout and measured as well.

Next up, steering. Oddly, this has too much sensation, by which I mean quite a lot of buzz from the engine rising through the steering column. And because the resonant frequency is between 2,000 and 3,000rpm, which is where the engine sits at 70mph, it’s prevalent. In terms of good vibrations, there are a few, but not enough to say it’s full of feel. What it does get right are weighting and accuracy. There’s an instant connection the moment you move the wheel, and that’s not only helpful when you’re cavorting along country roads. It makes life relaxing on motorways, too, because intuitively you can keep the car centred in a lane. There’s nothing frenzied about its turn-in, either. It’s not attempting to be sporty simply by being quick. It’s just right. I’m not being funny – and this will raise a few eyebrows, no doubt – but I prefer the way this car steers to a Fiesta ST. Sacré bleu, I know, but the ST is too darty, and once it’s turned in to a corner it’s fighting you, trying to return the steering to centre. This Monte isn’t like that. After turning in with precision the steering holds weight naturally.

I’ll tell you another thing that the Monte Carlo does better than the ST or ST-line, for that matter: comfort. It manages to deal with almost all bumps – potholes, sunken manhole covers, craggy Tarmac and speed bumps – in one, or perhaps one-and-a-half, bounces at most. Indeed, the only thing it seems to struggle with is a ridge that tests both ends of the front axle at once. In that moment you get a solid thump. The rest of the time it’s calm; so much calmer than the ever-bouncy ST-Line set-up. So along with its enjoyable B-road dynamics, it’s also enjoyable to sit in for an hour or so on motorways. I include the cabin isolation in that, too. There’s tyre and wind noise, sure, but for a small car on biggish wheels it’s not bad at all.

It’s better than ‘not bad’ on the practicality side, too. There’s loads of space in the front two seats and it’s surprisingly accommodating in the rear as well. I’m long-legged, but have legroom behind even a relatively tall driver, along with masses of headroom and space for my feet under the front seats. It’s a fine small car if you’re four-up. It even has a comparatively big and well-designed boot, with a height-adjustable floor and, beneath that, a spare wheel. You don’t see many of those these days. I don’t mean to get too nitty-gritty about this, but it also has decent-sized door bins, trays for odds and sods and a vast glovebox. It’s very easy to live with.

The driving position is another strong point. The Monte comes with sports front seats that are bolstered properly – not just around your midriff but the shoulders, too – so when you’re blitzing yet another roundabout with tyres chirping, you’re not carrying out an inadvertent sexual assault on your passenger. There’s plenty of adjustment in the steering column, the pedals are placed aptly, and the windscreen pillars are relatively thin, so you can see where you’re going. The Fabia even has buttons. You know, those things that the VW Group seems to have banned from all its other models. These allow you to make simple adjustments quickly and safely, instead pawing away at the dashboard trying to operate touch-sensitive buttons that don’t like being touched. Even the assistance systems aren’t overbearing and easy to turn off – they just don’t stay off when you switch the ignition back on.

And before anyone accuses me of delivering an advertorial, I’ll point out some more flaws for balance. While I appreciate the climate control buttons, Skoda must have let the bloke who buggered up the software for the ID.3, 4 and 5 have a fiddle, because when you change the temperature it blackens the infotainment screen to highlight this new ambient state. Why? It means you can’t see the navigation map for a few seconds and the temperature’s displayed on the climate panel anyway. Then there’s the panel itself. It wobbles with a light press. In fact, there are a few iffy bits of trim dotted about, although in the main the cabin ambience still feels pleasant enough.

The final thing I’d like to mention is the fuel economy. Needless to say, I wasn’t driving the Monte Carlo like Miss Daisy was in the back. I was enjoying myself if the road was twisty and aiming to make progress when it wasn’t. Yet the average economy after 300-odd miles was 48mpg. Take Miss Daisy for a spin and I reckon well over 50 is possible, which is good for the performance on offer, don’t you think? The only sticking point is the price. £23,735 doesn’t seem that cheap (the 1.0 TSI manual is £21,000). But I guess these days that’s about right, because it’s about what you’ll pay for the more pedestrian Fiesta 1.0 125 ST-Line. And since driving the easy-to-live with, quicker, better-riding Monte, that’s no longer the nailed-on default it once was.