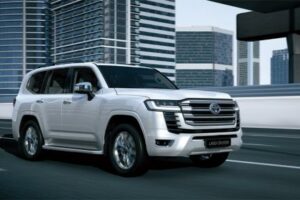 Toyota is also said to be limiting the number of SUVs sold to a client to just one.

Toyota unveiled its new (2022) Land Cruiser 300 Series globally earlier this year. The brand’s flagship SUV is said to have gotten off to a positive start in its home market of Japan, having received over 20,000 pre-orders already.

However, according to a media report, Toyota is making sure that the customers of the new Land Cruiser are not buying the LC300 for export or resale purposes. Reports suggest that Toyota has forbidden its Land Cruiser customers to sell their SUVs for a period of 12 months, after taking delivery.

Toyota will be making customers sign a contract, confirming that they agree not to resell the vehicle for the above-mentioned period. Customers failing to follow the contract will be banned from buying another Toyota. However, the duration of the ban is unknown, although reports suggest that the repercussions will be severe.

Toyota cited “risk of foreign exchange law violations and usage that could lead to major problems and threaten global security”, as the reason for taking such drastic steps. Reading between the lines, Toyota could be worried about the Land Cruiser falling into the wrong hands.

Toyota is also working on providing the SUV to genuine customers who want the SUV for themselves. In order to achieve this, Toyota is said to be limiting the number of SUVs sold to a client to just one.