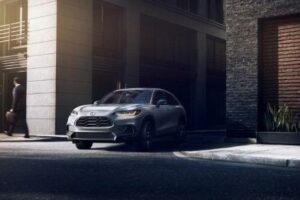 The new HR-V will go on sale in the USA in the coming months.

Honda has unveiled the 2nd-generation HR-V crossover in the USA. The all-new Honda HR-V SUV is based on the same platform as its 11th-generation Civic sedan, giving it a longer wheelbase and a wider stance compared to its predecessor.

In terms of design, the 2023 Honda HR-V comes with a bold new front grille flanked on either side by sleek LED headlamps with integrated turn indicators & LED daytime running lights. The SUV has a long bonnet at the front, large newly-designed alloy wheels, a sloping roofline and wrap-around LED tail lights at the rear. There is also a tailgate-mounted spoiler, which adds to the sporty characteristics of the SUV.

Honda hasn’t revealed the interiors of the 2023 HR-V yet, but is expected to do so in the coming months. Even the specifications of the powertrain are yet to be announced, although Honda has mentioned the use of a more responsive engine. The 2023 HR-V also comes with an independent rear suspension.

The new HR-V will go on sale in the USA in the coming months. It could also be introduced in other markets at a later stage.