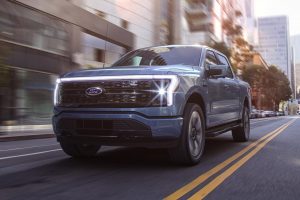 Ford has revealed an-electric version of its hot-selling F-150 pick-up called the Lightning, which produces 775lb ft of torque – more than any other F-series truck – and is claimed to be capable of 300 miles to one charge. At this stage, the pick-up is still under development, so the numbers are “targeted” rather than confirmed. But with a new “power frunk”, 11 external plug ports to power things and hands-free driving capability, it’s well on course to be Ford’s most advanced pick-up yet. And this being America, it’s set to cost $52,974, equivalent to just over £37k in Britain.

That’s for the normal version, too, with the tax-dodging commercial variant up for the equivalent of £27k. Yet that buys you a state-of-the-art pick-up with 571hp (563bhp) worth of twin-electric motors, and the ability of towing 4.5 tonnes of trailer, carrying 907kg of payload and storing 400 litres of luggage in a lockable front boot. The latter comes complete with 2 USB ports and domestic plug ports so you can power tools, while the pick-up itself – targeted to be capable of a circa-four-second 0-60mph time – can actually power a house for “three days” in a power cut, with up to 9.6kW of exportable battery power. Ford even goes so far to say that the F-150 Lightning can power a house for 10 days of rationed energy use off grid, handy if there’s an alien attack.

Conversely, when the electric pick-up is being charged, it is expected to take about 41 minutes on a 150kW plug to go from 15-80 per cent battery. Improvements may come in the future, too, with each F-150 EV connected to Ford’s over-the-air updates. With a hands-free autonomous driving function for certain motorways, the pick-up will certainly be at the cutting edge of Ford’s present tech offerings – and it remains F-150 massive by every measure. The centre console arm rest is wide enough to support a laptop, for crying out loud, and the frunk, complete with its high opening, is bigger than a Focus’s boot. Handy if you’re a workperson using power tools (plugged into the pick-up, of course) or someone packing a weekend getaway’s worth of luggage and campsite supplies into it.

Of course, Ford’s biggest challenge with the F-150 won’t be convincing people of its tech or usability, but rather convincing buyers who’ve long associated pick-up life with a gruff engine note that this is an option worthy of the range. While it’s true that not every American state has been as welcoming of the prospect of battery power onto US roads, with the Hummer and now F-150 – the latter of which was until recently so popular in the US that it ranked top in global car sales figures – now flying the EV flag, there’s clearly enough potential demand out there to justify the investment. Offering a quick, clever and still surprisingly affordable pick-up like the Lightning is a sure-fire way to get people interested. And leave those of us in Europe evermore jealous.