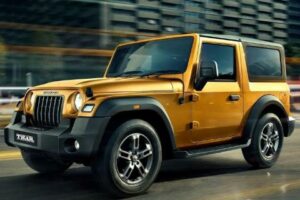 At city speeds the ride quality is quite bumpy. I felt there is not much difference in the way this drives compared to the 4×4: It retains the same DNA:

BHPian Abby28 recently shared this with other enthusiasts.

Checked out the Thar 2WD Diesel MT in person yesterday along with a couple of friends, and was lucky to get a 10 KM test drive (mix of a bad and patchy road in the city and about 7 kms of highway). Here are some observations as a Honda City iVtec (2010) owner, starting with the negatives:

I was looking to replace my ageing Honda city (2010) with the Thar (given my wife drives an i20 auto we recently bought and consider this good enough for in-city drives), but have decided not to go for it as I agree with common observation by most members here that this ain’t primary-car material, but a 2nd or probably even a 3rd car good for just those infrequent excursions off the tarmac to your farmhouse or weekend homes.

Check out BHPian comments for more insights and information