8 things we learned racing in EnduroKA 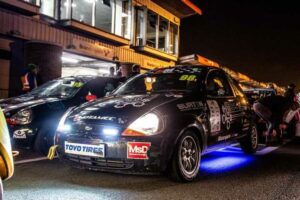 After three seasons, all good things must come to an end. But we've learnt a bucketload…

When we signed up to compete in the inaugural MSVR EnduroKA season, we only set out to race for the first year. But it blew our expectations out of the water, so we signed up for a second year in 2020. Then covid happened, half the races were cancelled, and we thought we owed it to ourselves to do just one more year.

You’d think with our car being written off at the final race of 2020 would have been a natural line in the sand, but it’s hard to hang up the overalls when you’re having so much fun. Even now having finally decided to call it a day with our car sold, we’re kicking ourselves a bit – especially with the first 24-hour race set for 2022.

We’ve learned a lot since we started in 2019, so if you’re thinking of giving EnduroKA a go or indeed any kind of motorsport, here are our top tips.

Even though RacingPete spent many years racing solo, he says he’d struggle to go back. Racing together and celebrating achievements is just more fun with more people. But it’s important from the outset to decide who’ll be doing what, from building, storing, maintaining, and transporting the car to who’s going to make the tea.

We all chipped in, in one way or another, even if Matt Dell’s contribution was chiefly crashing the car. Twice. Pete has been a fantastic coach to me personally, without a doubt making me faster at every round I raced. And last but certainly not least, no team is complete without a manager. Dan Collett, aka Geeks, was great at whipping us all in to shape and ensuring we were ready for pit stops and driver changes. If there was an award for the most time spent on the pit wall, he would have won it.

You might think you’d be better off watching paint dry than hammering a Ford Ka around a track, but you couldn’t be more wrong. As a budget race series, there is a limited list of things you can change on your car, to ensure there’s a level playing field on the grid. Packed onto a grid of 40-plus cars all built to the same specification is utterly brilliant, no matter how fast they are. Even if you’re not the fastest driver in your team, there’s always a battle to be had whether you’re at the front of the grid or the back.

Anyone can do it

Pete was the only seasoned racer on our team, the rest of us were novices. We went into our first race with low expectations – all we wanted to do was finish. Despite a lack of tuition or practice, we put our car on the podium – the excitement and elation of that day will stay with me forever, even if we didn’t win the race. Being a series and not a championship, there are no points after each round. But who are we kidding? Everyone was keeping tabs, and we officially won the unofficial championship in 2019 that was scored on a length of bog roll. If we could do that – as mostly a bunch of amateurs – then anyone can.

OK, circuit racing is never going to be dirt cheap. There are plenty of more affordable grass-roots motorsport disciplines out there, which is exactly where we’re heading next year. But the beauty of endurance racing is that as a team, you share the costs.

Our first full year in 2019 cost £17,037, excluding personal costs such as race licences, racewear and personal travel. But that does cover everything else, from buying the car, insuring and taxing it, building it, race entry fees, running, breaking and fixing it. Or in other words, for our team of five drivers, £3,407 each for 36 hours of endurance racing across five races.

Assuming your car is in one piece for the next season, you’re looking at circa £2,000 each based on our running costs from 2019. If my Man Maths serves me correctly, that’s around a fiver per minute of track time, compared with at least £50 per minute that hill climbing will cost you. See, great value for money…

Fail to prepare, prepare to fail

We learned the hard way that leaving jobs to the last minute doesn’t work. If you’ve got prep work to do on the car, make sure it’s done before you arrive at the circuit, no matter how much time you think you’ll have. We had a haunting moment at the start of this year: we realised we hadn’t changed a chaffed front brake line, which ultimately failed with Pete in the car at the end of the fastest straight at Donington Park. He ended up in the gravel, but it could have been a lot worse.

We never did much testing in the car, either, with one track day before the season started if we were lucky. We got away with it in 2019, but the competition is stronger now and our failure to test when the other teams had probably held us back from getting on the podium this year.

My biggest regret was never investing in comms gear from the off. We missed so many opportunities, and even didn’t finish a race due to not being able to communicate with whoever was driving at the time. Simple things, like being able to check the fuel level and telling the driver the position of the car in front of them makes the world of difference. Oh, and reminding them to tap their Hu Tag at the end of the pit lane, too…

We finally invested in a pit-to-driver package from IntaRace earlier this year, and I cannot stress just how much it transformed our races. Good thing I have a PhD in Hindsight alongside my doctorate in Man Maths.

When our time competing in EnduroKA looked like it was all over before we’d even started the race at Brands Hatch in 2020, I was doing my best to throw in the towel. It shook us up how easily Matt had been collected in the gravel trap at the bottom of Paddock Hill and the damage it had done to our car.

Yet on closer inspection, the roll cage didn’t have a scratch on it and the car was straight. We battered it for hours, begged and borrowed everything we could from others in the paddock, and got out on track. Starting from the back of the grid we finished in second place, and would have won if Charles had remembered to scan his Hu Tag at the end of the pit lane (see, communication).

All good things must come to an end

With house moves and young families taking priority next year, our time competing in EnduroKA has finally come to an end. It has been one hell of a journey and not one we expected to last three years – I think by now you should have a sense of how much it has meant to all of us. We never did get that illusive race win, but we made memories to last a lifetime.

If you’re thinking about competing in EnduroKA or any kind of motorsport, do it. If you’re looking for guidance, then head over to our UK club motorsport forum for some pointers. It might be the end of our EnduroKA journey, but we’re certainly not done with motorsport, so watch this space for more to come in 2022.

Finally, we’d all like to say a huge thank you to everyone that has helped us along the way – especially our sponsors: Burton Power, Motorsport Tools, 1st Tickets, Sevens & Classics, Demon Tweeks, Intarace and Powerflex. Thank you to Stuart and MSVR for creating such a fantastic racing series and thank you to Jamie at Moores Motors, Karl at Graves Motorsport and everyone in the paddock who has helped us in one way or another along the way.