A peek into the Mahindra XUV700’s engine bay 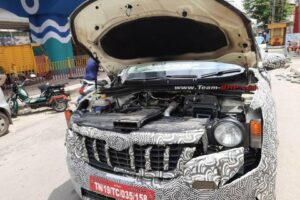 The SUV has a centrally-mounted rectangular air intake vent and under-bonnet insulation.

A prototype of the Mahindra XUV700 was spotted in Bangalore with its bonnet raised, giving us a peek into the engine bay. It is unclear if this SUV is powered by a petrol or a diesel engine.

The SUV has a centrally-mounted rectangular air intake vent and under-bonnet insulation. The prototype does not come with hydraulic bonnet struts. However, they are expected to be there in the production version.

The XUV700 is likely to get the most powerful petrol and diesel engines in the segment. It is expected to be powered by a 197 BHP 2.0-litre turbo petrol engine and a 182 BHP 2.2-litre mHawk diesel engine. Both manual and automatic transmissions are likely to be offered.

The Mahindra XUV700 is expected to be launched in October this year, while bookings might open in August.

Thanks to BHPian balenoed_ for sharing this with other enthusiasts.