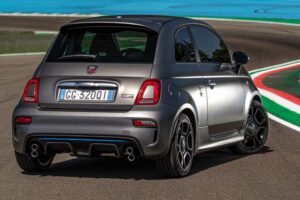 … which is just the 1.4-litre turbo anyway. But look, vertically stacked exhausts!

If it seems like it’s only been a matter of days since the last Abarth special edition, then well remembered – it was the start of this month that the 695 Scorpion was launched. Now it’s the turn of the 595 to join in on the fun, with the new F595. If petrol-powered Abarths won’t be around much longer – don’t forget the new 500 is electric only – then they certainly had a decent run…

This F595 is pitched as a tribute to 50 years of Carlo Abarth’s Formula Italia single seater. Back in 1971 the decision was made to create an affordable single seater championship in Italy, with Abarth as a company tasked with building it. The SE025 was the result – see one on video here – powered by the 124’s twin cam and using a host of other parts-bin bits to keep costs down. The Formula Italia series kicked off in 1972, and served as a starter series for drivers like Riccardo Patrese.

So that’s the history. The F595 pays tribute to that heritage with, er, 17-inch ‘Formula’ alloy wheels. But then it was always going to be a tricky task. Additional upgrades for the F595 include Rally Blue accents, a Record Monza Sobrapposto exhaust – with each pair of pipes vertically stacked – Koni FSD dampers and an ever so slightly different dashboard. You were expecting something drastic?

Abarth says the F595 is “derived from the racetracks of Europe”, given the 1.4-litre engine is used in the Tatuus single seaters used for both German and Italian F4 championships. It has been since 2014, in fact, so it’s a surprise it’s taken this long to celebrate the fact. Sadly it’s not been given any additional power here, with a peak still at 165hp, though given that conveniently matches the race car’s output, that’s hardly a surprise. The standard gearbox remains a five-speed (!) manual, with an automated equivalent on the options list.

For the full race car effect, the Abarth F595 is also available as a convertible. The model is available to order now, priced from £20,305 as a manual hatch. We’ve got the Abarth template already saved for August’s special…