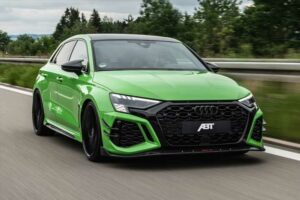 Just 200 of these uber RS3s will be made, Abt aero package and all…

Yes, yes, another Abt Audi. But there is more to the RS3-R that meets the eye, even if what does meet the eye is bold already: a new high gloss carbon aero kit, comprised of front lip and flics, rear spoiler, rear diffuser and, er, mirror caps. Even in a colour other lurid green, it’s going to get you noticed.

No, the important news for this RS3 is a power output of 500hp, which looks a huge number even by the standards of these ‘-R’ Abt cars, which have in the past included a 740hp RS6. Because it’s a 500hp hatchback when the regular RS3 makes the same 400hp as the previous version, representing a 25 per cent gain. Hatchbacks with 500hp are Group B rally cars, not everyday Audis, which makes the RS3-R kind of cool. Even in this colour.

Not least because the power output has been achieved with fairly modest modifications. Perhaps no surprise when it’s considered some cars with this 2.5-litre five-cylinder turbo are making almost 1,000hp. To liberate another 100hp with a new intercooler, ‘Abt Power R performance upgrade’ and ECU work shows how much headroom is in the engine. Torque is now rated at 442lb ft, too, a useful boost from the standard 369lb ft. Both make for a fearsomely fast Audi: just 3.3 seconds is claimed for the 0-62mph sprint, down from 3.8. The 186mph top speed is the same as Abt’s 460hp upgrade, albeit now with the limiter raise available through the myAbt app for no additional charge.

Chassis changes for the RS3-R include Abt’s own springs and anti-roll bars, with KW V3 suspension on offer as an option. Tuned and tweaked by Abt, the suspension upgrade means “everyday driving provides just as much fun as the racetrack.” Those wheels are Abt’s own forged items, 20-inch in diameter, with Goodyear Eagle F1 Supersport R tyres on each corner. Abt claims “low unsprung masses” without stating a weight loss over the standard wheel.

Finally, the RS3-R gets a few interior embellishments to mark it out as a full Abt special edition rather than just an Audi RS with a bit more power. They include inscribed emblem badges, floor mats with an ‘RS3-R’ logo, Abt entry lights and the logo on start button as well. “After all, such a potent engine wants to be brought to life in a manner befitting its status”, reads the press release.