Home » News & Features » Ad of the Week: The VW Corrado Can Best a Beetle's Terminal Velocity

Ad of the Week: The VW Corrado Can Best a Beetle's Terminal Velocity In late 1988, Volkswagen created the sleek two-door Corrado to have a Scirocco successor ready for the 1990s. Past 1995, the modern day sporty hatch once again known as the Scirocco has been dead since 2017, while today in North America, VW doesn’t even sell a two-door Golf GTI, let alone a Golf R, which has been totally discontinued for 2020. Yet we shouldn’t forget how three decades ago, early Corrados went supercharged for our driving pleasure.

Welcome to Ad of the Week! Vintage ads are fun. They come from a time when enthusiasts gathered their knowledge mostly from print magazines, TV and radio ads, and billboards sized to fit several land yachts. We’ll be taking a deeper look at one every week to explain the claims, context, and how that all worked out in reality.

Designed by VW’s Herbert Schäfer and built by Karmann, the 1989-1990 Corrados were based on the earlier A2 Golf/Jetta platform, while the later VR6-powered models used the third-generation Golf’s A3 platform, the same that underpins the 1992 Vento. One of the Corrado’s main party tricks is its active rear spoiler, which raises automatically above 60 mph in Europe, 45 mph in North America, and automatically retracts at speeds below 15 mph, allowing for manual operation as well.

By the late eighties, Volkswagen was defiantly getting ready to unleash its unique narrow-angle VR6 engines, just not quickly enough for the Scirocco’s more upscale replacement. Therefore, the Corrado debuted with two engine choices: the base 1.8-liter with 16-valves and 134 horsepower, and the G60 with the same 1.8 four-cylinder featuring an 8-valve head and a G Lader supercharger, good for a healthy 158 horses. 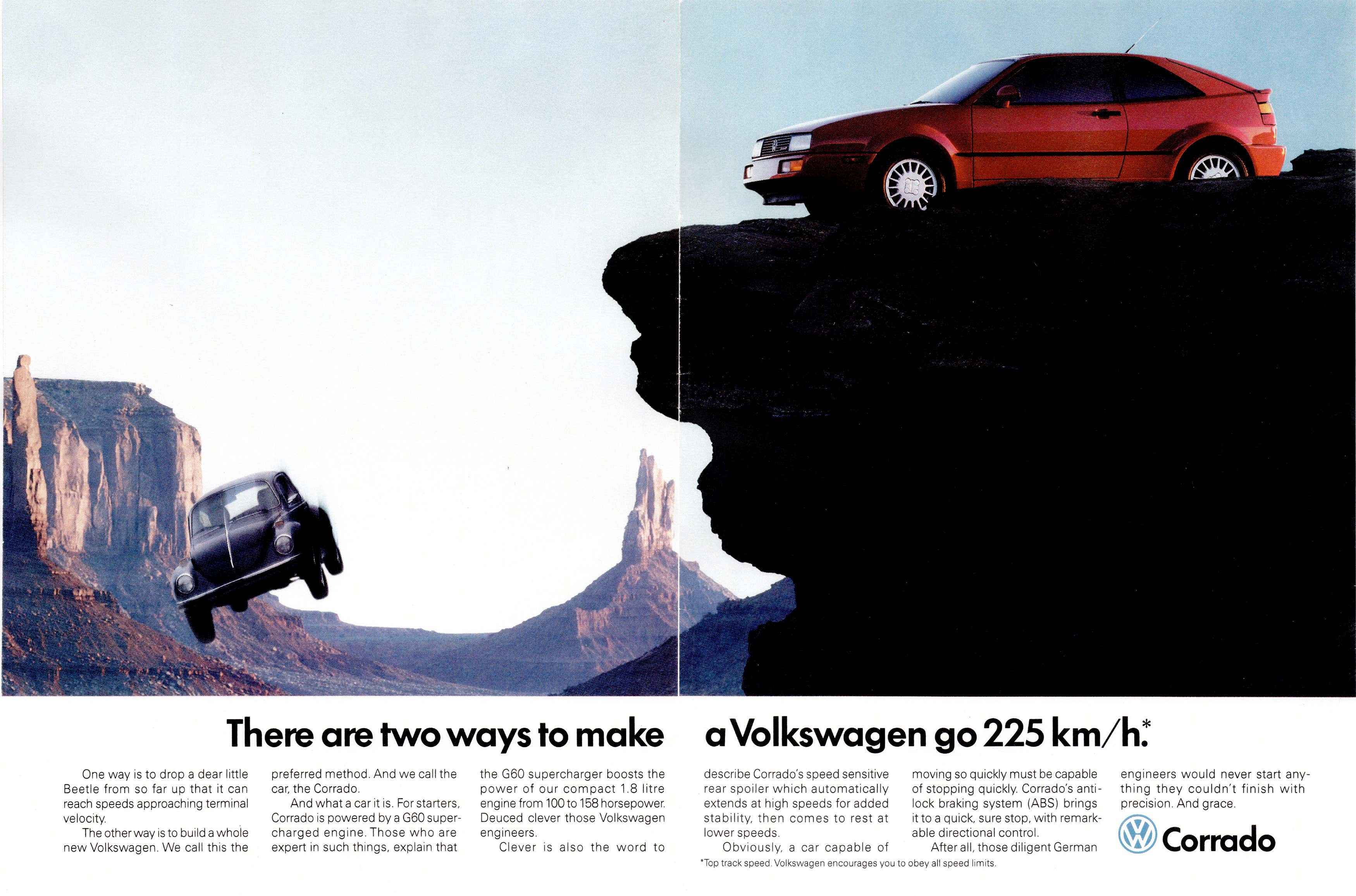 To point out just how fast that is, Volkswagen of Canada turned to the concept of a free-falling Beetle. Terminal velocity is the maximum speed attainable by an object falling through a medium, which in our case would be air. Science tells us that a human with his/her belly towards the ground would free fall at 54 meter per second, which is just over 120 mph. Due to its more substantial air resistance, a Beetle would probably do worse towards its ultimate demise, yet Volkswagen argued that being dropped at the right angle, its doomed Bug could achieve speeds close to the Corrado G60’s top pace on the Autobahn.

Luckily for Volkswagen customers, the brand also promised smoother deceleration thanks to the Corrado’s standard anti-lock brakes. For 1992, Volkswagen introduced a 2.0-liter four-cylinder for Europe, and the 12-valve 2.8-liter VR6, which offered 178 horsepower in America. The G60 was dead by 1993.

If all this makes you wonder not only why we don’t have the Corrado’s modern equivalent on the market just yet, but also why Volkswagen never combined the 16-valve head with its G60 supercharger, please note that Volkswagen Motorsport produced a pair of such G60 V16 prototypes for its entertainment, both finished in Nugget Yellow.

END_OF_DOCUMENT_TOKEN_TO_BE_REPLACED

END_OF_DOCUMENT_TOKEN_TO_BE_REPLACED
We and our partners use cookies on this site to improve our service, perform analytics, personalize advertising, measure advertising performance, and remember website preferences.Ok