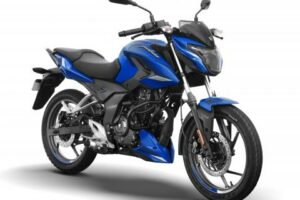 The new Pulsar P150 is based on the next-gen Pulsar platform that was introduced in October 2021.

The new Pulsar P150 is based on the next-gen Pulsar platform that was introduced in October 2021. The bike now features a sharper, sportier design and an underbelly exhaust. The single-disc variant offers an upright riding position, while the twin-disc variant has a sportier stance and comes with a split seat.

Bajaj claims that 90% of the torque is available across the usable RPM range. The bike weighs 10 kg less than its predecessor, which is said to translate to an 11% increase in the power-to-weight ratio.