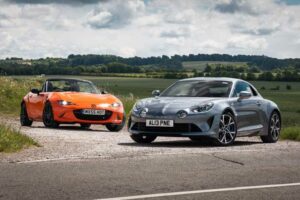 Small, mighty and marvellous come together

In a world of AMG hybrids knocking on for 2.5 tonnes, M4 cabrios worryingly close to 2,000kg and plug-in Range Rovers well beyond either, seeing 2,164kg quoted for a fast car is nothing out of the ordinary. Cars are larger, safer, and more complicated than ever, with none of those attributes exactly conducive to trimming the kilos. Which makes 2,164kg as the combined kerbweight for two new cars even more remarkable – and that’s exactly what we have here.

Both Mazda MX-5 (1,045kg) and Alpine A110 (1,119kg) are often talked about in isolation as exemplars of lightweight innovation, yet seldom paired together. They aren’t conventional rivals, really, given the gulf in asking prices, but as celebrations of what can be achieved without much mass at all we could think of none better. Much more habitable than the true sub-tonne lightweights yet hundreds of precious kilos lighter than ordinary sports cars, they show off perfectly what can be gained – in terms of ride, handling, efficiency and much more – by not adding much at all. It’s worth mentioning, too, that they are representative kerbweights without a driver, not ones that require careful massaging through expensive options ticks or outright fantasy. Like weighing a car without any vital fluids in. They’re just light – and fantastic.

Specifically, the cars here are a 2019 Mazda MX-5 30th Anniversary Edition, uprated with BBR’s excellent Super 220 kit, and the very latest Alpine A110 GT, all 300hp and £60,000 of it. Even given their respective perches in the sports car hierarchy, this isn’t an eyeline match up – ideally there’d be an A110 S to take on the racier MX-5, or perhaps a Life110 Alpine to continue the modified theme – but there is more than enough common to both to make it interesting.

Not least because the Alpine remains so compelling out of the box that many would change a thing. While it’s become clear that a few tweaks further improve the package, there’s little out there at twice the price that so instantly reminds you what a joy driving can actually be. Crucially, much of that entertainment remains attributable to its diminutive size and weight: roads are wider, gaps are larger, the ride is cushier, and the world (or Britain’s network of B-roads) feels your oyster in something that seems the polar opposite of a broad shouldered, stiffly sprung sports car. Small, nimble and agile opens up so many more opportunities.

This latest GT feels better than ever; more power might seem counterintuitive to the Alpine ideal, but 300hp and 1,100kg isn’t half exciting. It can easily be forgotten in all the (justified) gushing about how an A110 steers, rides and stops, but it really is a very fast car: 0-62mph in 4.2 seconds matches a manual 911 Carrera S – and that only tells part of the story. Even allowing for some lag from a 1.8-litre turbo churning out almost 170hp per litre, the A110 soon flies along like a leaf caught in the breeze, accruing speed with seemingly no effort at all. In fact, nothing the Alpine does well feels even remotely taxing. Perhaps when really pushed the relative softness of the chassis finally gets the better of the A110, although, honestly, if that’s the payoff for such an amenable, agreeable, comfortable sports car the rest of the time, then we’ll take it. And you know that such suppleness and control (in everything but the most extreme circumstances) simply wouldn’t be possible with a heavier car.

That a car half the weight of a Bentley can be such a lovely object also counts in the A110’s favour. It feels impossibly French in this respect, covered in leather like a Chanel football boot. But it works. If the drive proves that sportiness doesn’t have to mean crazy stiffness, then the interior reminds you that luxury isn’t the same as excess. It’s a very neat trick; opulence and true driving fun tend to be mutually exclusive traits, even when spending a lot, so to find them so closely aligned only deepens the affection one feels for the car’s singular, mini-GT charm offensive.

You probably don’t need telling that an MX-5 isn’t luxurious, opulent or refined; not in standard trim, and most certainly not after BBR has had its way with one. It’s a sports car like they used to be: small, loud, raucous and obscenely entertaining to drive fast. What’s interesting to note flitting from A110 to Mazda, however, is how much Alpine has packed into just a few more kilos and millimetres. Courtesy of its much more sophisticated construction, it feels so much more mature, and cleverly subdued. Provided both passengers could pack (very) light, you’d think nothing of driving to Europe in an A110, with even taller folk comfy behind the wheel. The MX-5, with its driving position best suited to jockeys and endlessly buzzy motorway manners, would certainly require more effort. The French car officially weighs just 64kg more than convertible (and that 1,119kg figure is the lightest kerbweight), yet it’s ability to isolate you from the road is on another level entirely.

Of course, that’s partly because the MX-5 isn’t really concerned with isolating you from very much at all; it only knows how to do lightweight thrills the traditional way. The A110 will almost coax itself round corners; the MX-5 wants you involved on a blustery, gut level. In that sense, it is the ideal riposte to the cultured, can-do style of the slimline GT. Especially if you’ve had the foresight to deliver your BBR, and had them extract a very vocal 224hp.

Because however rowdy it might be at a cruise, it’s more than liveable, and the pay-off on a good road is more than worth it. We’ve said it before, and we’ll say it again: there really might not be anything more gratifying than a good MX-5 when the conditions suit. Not if the other car weighs 75kg more or 750kg more. All the advantages the A110 earns from its small size are here, present and correct, only with a healthy dollop of attitude on top.

It says something that breathed-on Mazda makes you reflect on what a shame it is that Caterham couldn’t continue with their side of the A110 project. In the same way that BBR brings the best from an MX-5 – an engine that revs quicker, goes harder and sounds better, crisper steering and tighter suspension – without tarnishing its innate appeal, so might Caterham’s 110 have delivered a unique take on the Alpine formula. With a manual gearbox, too. It’s given both Renault and the aftermarket scope to expand their offering (and very well they’ve done, too), though it remains hard not to imagine what might have been.

Like the A110, the MX-5 is a simple car, and all the better for it. There’s a Sport mode in the Alpine that does nothing to the suspension or steering, and the Mazda dispenses even with that small frill. Both prove how superfluous such add-ons are if the base product is properly sorted. Never do you wish for more steering weight or suspension stiffness, or a different brake pedal feel in either, because they’ve been setup just so already. Configurability can be great, sure – but it’s no substitute for doing the job properly in the first place.

The BBR in particular feels how you imagined a sports car would be before you could actually drive one. The 2.0-litre engine thrives on revs, really giving its best beyond 6,000rpm and screaming all the way to 8,000rpm – much in the way we always hoped an MX-5 would. The six-speed manual is a dream, too, perfectly weighted and with exploitable ratios, while the upgraded Wilwood brakes make it the easiest car in the world to heel and toe.

But it’s the incisiveness and superior control offered by the switched out springs which really ties the package together. The Super 220 is more responsive at the front end and more throttle steerable at the back. Even allowing for a tiny bit of trademark MX-5 wobble and steering that’s still a tad light, the orange car is an unmitigated joy on a country road. ‘A Caterham with CarPlay’ is one of the notes from the day, which usefully summarises its ability to blend 1,000kg and 8,000rpm with everyday usability. In fact, there wouldn’t be one day that goes by where it wouldn’t feel like money very well spent indeed.

That’s probably the key takeaway from both Alpine and BBR MX-5 – the longer you spend with them, the more impressive they seem. Each grabs you straightaway with the virtues of lightweight construction, making so many other fast cars seem gratuitously lardy, but it is not the limit of their appeal. Far from being flaky, insubstantial offerings, they’re sports cars of real integrity and sophistication – while never losing sight of what makes 1,100kg cars so great. It’s a wonder, really, that more in this mould haven’t been attempted, particularly given the renewed focus on efficiency and waste, though perhaps the scarcity goes to show how difficult the task is.

Regardless, there seemed no better time, with a 1,625kg BMW CSL and 1,500kg Lotus sports car out there, to show just what can be done with a tonne or so. Both use less fuel, take up less space and place less stress on their components than the heavier stuff, yet never fail to deliver as driver’s cars. You might even argue they over deliver, on the basis that the BBR adds a serrated edge to the MX-5’s occasionally dull charm, and 300hp really does provide the suave GT with a shot in the arm. The pair are ultimately well separated by cost and remit, but rest assured both are still brilliant – as you may have heard once or twice already – and anyone disillusioned with increasingly bloated kerbweights could do an awful lot worse than spending their sports car money with either Alpine or Mazda. Light has never felt so right.