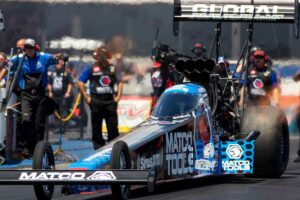 Antron Brown genuinely loved racing a Pro Stock Motorcycle when he first broke into professional drag racing, and he quickly became popular with fans and competitors alike. But he soon discovered that his values didn’t always mesh with the NHRA’s or with those of his rivals.

Proud of his seemingly tireless work habits, Brown admittedly was frustrated at times because of the push for parity in the class. He and his Suzuki, along with Angelle Sampey and hers, were the class of the field at a time the V-twin and Buell engines weren’t keeping pace. So the NHRA added weight to the Suzukis to level the playing field. And Brown questioned why.

“People were telling me, ‘You’re just outrunning everybody.’ I was like, ‘That’s because of the work that we put in at the shop. We work on our stuff like 10 hours a day, five days a week. And sometimes we’re there on weekends.’”

At a meeting with the NHRA Competition Department, his competitors remarked that the weight ruling sounded fair. He challenged them: “Why do you think that’s fair? What did you do between this race and the last race?” They said they parked their equipment and flew home. Brown said, “Well, you know what we did? We drove back to Indy and worked on our bikes and put them on the dyno and started working on our cylinder heads to make our stuff better, then came back here. Yet you’re complaining because we’re outrunning you.”

Hard work always has been the answer for Brown. And it’s his hallmark as he prepares to launch his own independent team in 2022.

He learned that at home in Chesterfield, N.J., where his family still operates a septic-tank service. “That’s what motivates me to work hard each and every day,” he said. He did joke that he didn’t want to join the family business because he didn’t want “to be No. 1 in the No. 2 business.” But even that amusing remark proves that he would have expected to be a leader at whatever he was doing. “It doesn’t bother me to work in our family business. I actually enjoyed it. You meet a lot of good people. It was definitely good times,” Brown said. “My family still makes good money doing that. And it’s hard work.”

And his predisposition for demanding labor didn’t go unnoticed. Top-tier tuner Lee Beard had observed Brown when they worked together at Don Schumacher Racing. Brown said, “Lee Beard had seen me work on that Pro Stock Bike program from sun-up till sundown. I remember Lee Beard saying, ‘You get here before we get here, and you’re here after we leave.’ I said, ‘Well, Lee, I want to win. That’s why I’m in the shop. I want to win championships. That’s why I work so hard.’ People just never understood that.”

Beard got it. And unbeknown to Brown, Beard, who left for another team, spoke with his new boss, David Powers, urging him to put Brown in a dragster. That was the break Brown had been seeking. Brown’s ultimate dream was to compete in Top Fuel or Funny Car, and even Darrell Gwynn encouraged Brown to make the switch years before without any hint from Brown that he was interested. Brown said he wasn’t sure he ever could find that path but that he became motivated when someone told him to stop dreaming and start doing.

“That’s when I started putting the feelers out to let people know I wanted to go fuel racing. I didn’t say it to the media, but I said it to every crew chief I came into existence with,” Brown said. “I even told my own team owner at the time (and now), Don Schumacher, ‘I would love to try to drive a fuel car.’ It literally took from that point there until 2008. It literally took five or six years before I got that shot with David Powers.”

Ed “The Ace” McCulloch, then a Funny Car crew chief for Ron Capps, volunteered to oversee a test, and Schumacher approved it. But it never happened—the day Brown was supposed to get his first taste of a nitromethane-powered race car, it rained. “Lee Beard was there. And he wanted to put me in one of the cars he was tuning. Lee used to talk to David Powers about me all the time, but I never knew until he mentioned it to me in the airport one time,” Brown said. “I said, ‘Lee, I’d love to do it.’ And that’s when it happened.”

It didn’t take long for Brown to impress—he was No. 1 qualifier at the season-opening Winternationals in his 2008 Top Fuel debut and got the first of 52 Top Fuel victories just four races into his new gig. He was hungry, not just to join the Top Fuel class but to win races and titles. He remained the same happy-go-lucky racer he was on two wheels, but he had a void to fill, he revealed recently. Those debates with the sanctioning body, trying to make everyone understand that his only “unfair advantage” was that he worked hard, gnawed at him. He isn’t bitter, but he recognizes what has propelled him.

“I got penalized for that for years. I could’ve won three championships. That left an empty void in me. Every time we got close, it got taken away because of rule changes. I kept thinking, ‘That doesn’t make sense.’ It kills me,” Brown said. “But that’s past—on to the present now. But I’m talking about that because that’s what I’ve always done, and I brought that same work ethic from there to where I am now. It’s always been one goal to the next goal.”

His next is to parlay all of his own lessons and observations, all of the wisdom and data Don Schumacher has shared with him in frequent one-on-one meetings, and all the advice from trusted friends (among them Troy Vincent, who funded him initially in the sport and today is the executive vice president of Football Operations with the National Football League) and step into team ownership.

Brown shrugged off the hoopla about his planned move and the fact he’ll be the first Black team owner and driver in the NHRA nitro ranks.

“I owned my own Pro Stock Bike team a long time ago. Different people make different deals of different things,” he said. “The cool part is it’s a young owner coming in. It’s going to be a new deal. And that’s the excitement. And hopefully it’s exciting because what it’ll do—what I hope comes out of it—is that it motivates and energizes other people into saying, ‘Hey, we can do it, too. Let’s go fuel racing. Let’s go nitro racing. Let’s go Funny Car racing.’ It may shake some people up.

“Look at Josh Hart stepping out this year,” he said, referring to the successful young Ocala, Fla., businessman and sportsman racer who strategically planned his Top Fuel debut in March and won his maiden race, the prestigious Gatornationals. “We need more teams like this to do that. And that’s what this is all about, for me.

“I’m going to give everything I have to help the sport grow to where it needs to be. This ain’t for me – this is for the future,” Brown said. “And this is for all my guys involved. I’m going to take care of my team and take care of the fans: give ’em an experience they won’t forget.”

He said, “Hopefully I can be motivation for some people out there to say, ‘Hey, AB’s doing it. I can do it.’ And it helps them figure out how much to put in and how they need to work to do what they need to do. That’s all it is. A lot of people are gun-shy. I think there’s a lot of people that should be capable of being team owners. They put their heart and soul into it. Team ownership’s not made for everybody, of course. But if you put yourself with the right people and the right partners, it makes it that much easier.”

He has his core group: crew chiefs Brian Corradi and Mark Oswald, car chief Brad Mason, and the crew he trusts.

“There’s no way I would have done this on my own.”

“That’s what made me able to do it. We’re all doing it together. There’s no way I would have done this on my own. There’s no way that I would have gone out and said, ‘Hey, this is what I want to do: start from scratch and do this and do that.’ For me, it was something strategic where I started doing all of this, I reached out to all the people that are in my family,” he said.

“A lot of people forget that I was a business major. I’ve got a business administration degree. I’ve been part of doing business on the marketing side and putting all of our campaigns together with all of our partners. I’m the one that does the work from Monday through Friday between races to help my partners get their return on investment and find out what they are really trying to capture and what they’re really trying to do.

“And I just try to implement that to help them get there. That’s what’s been very instrumental for me in being successful where I’m going, all the work that I do off the racetrack – not just winning on the racetrack but winning off the racetrack for all our partners to help them be where they want to be and help being a part of their brand,” Brown said. “I’ve learned from so many people in this sport by being around them.”

Brown is passionate about helping the NHRA grow and has ideas about how to do that, but he said, “It’s not just by being a team owner that’s making it better. I think the way to make it better is that we all do it together: the sanctioning body, the teams, the drivers, all the partners that are involved, and all the tracks. It takes all of us together. That’s what makes it better. I see it’s already in that realm right now. The more and more I talk with NHRA and see the NHRA the tracks where now it’s starting to come together.”

He also knows where wants to go with his own organization.

“Once we get going and get our feet underneath us, the plan definitely is to expand and have a two-car team,” he said. “My goal would be eventually to have one dragster and one Funny Car. The biggest I would ever want to be is two in each category, and that’s it. It gets to a point where it gets crazy. But honestly, I’ll be content to have one in each category so you can really focus on them.”

Right now, he’s focused on improving from his No. 2 position in the standings and challenging dominator Steve Torrence for a fourth Top Fuel crown.

Will Antron Brown be successful? Is he making the right move in leaving Don Schumacher Racing? Start the NHRA conversation in the comments section below.