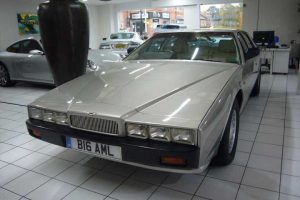 Its present day successor might have stalled, but the old Lagonda remains an Aston landmark

The last time we plucked an eighties Lagonda from the classifieds, we were newly excited by the prospect of a 21st century model to finally succeed it. Of course, since then things have changed somewhat. Aston Martin's leadership has been swapped out, and so has the strategy. With its efforts now focused on re-entry into F1 among other things, plans to relaunch Lagonda as an all-electric luxury brand have stalled.

Admittedly, Lagonda has sporadically enjoyed the spotlight more recently – remember the Lagonda Taraf back in 2015, which arrived as a Rapide-based luxury four-door? That was a £700k car and there were only 120 of them, so you'd be forgiven if it passed you by. Certainly it wasn't a true successor for the Series 4. That was the job of the all-electric SUV that Aston revealed to great fanfare in 2018.

Still, its non-appearance has done the old car's values no harm. The final eighties Lagonda model, the S4, arrived nine years after the S2 that first wore William Towns' wedge-shaped body, and while the form had been slightly altered to keep up with the times, it still looked great. It still does today, even if the 'futuristic' look is best viewed through an eighties sci-fi lens – as Tesla does with its angular Tesla Truck.

Naturally the 5.3-litre V8 under the bonnet prefers hydrocarbons to electrons, having been carried over from the more traditionally styled Series 1 Lagonda (which was also designed by Towns). In the S4 model, it outputted 313hp and 320lb ft of torque, enough to ensure the two-tonne luxury brute felt brisk. The focus was, however, on comfort and pizazz, and the Lagonda delivered on both fronts.

The car you see here is a great example of the closing generation. It looks immaculate (you can't miss the shininess of the chrome, even in blurry interior pics) and with 24,000 miles on the clock, it's clearly lived a life of low use. It's even been owned by the same custodian since 1990, which normally points to good things as far as this sort of car is concerned. The Lagonda story might not be getting a new chapter anytime soon, but that doesn't mean it's slipped from the pages of history completely. Even at £118k…