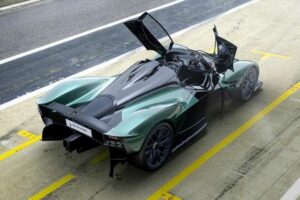 Valkyrie not exclusive or exhilarating enough? Along comes the Spider!

If a bingo card existed for Pebble Beach Concours d’Elegance car debuts, the Aston Martin Valkyrie Spider would score a full house. Impossibly dramatic looks? Check. A roof better suited to being on display than on a car? Check. Outrageous V12 now exposed to the elements? You got it. Prohibitively exclusive? But of course – apparently all 85 are already spoken for, and there’s queue of people waiting behind for any dropouts. Nothing could be better suited to California’s elite at this time of year than the Aston Martin Valkyrie Spider.

Pitched by its maker as “an even more intense experience” than the coupe, the Valkyrie Spider apparently “delivers the most comparable experience to that of an F1 car”. This time that might not be as far from the truth as those claims so often are. Power is certainly there in abundance, with the coupe’s 1,155hp hybridised V12 carried over for this car and its sound even closer company than the coupe.

The significant tweaks, as always with this kind of work, are in the chassis. For now, Aston Martin speaks only of “precise recalibration” of both the active chassis and components, as well as tub modifications to accommodate the roof. Work underneath keeps the Valkyrie largely free from add-ons up top, and 1,400kg of downforce is promised at 149mph. That said, the Spider has plenty more to give from there; the fastest open top car in Aston’s history is capable of more than 205mph with the roof stowed back in the barn, or in excess of 217mph with it attached.

Speaking of the roof, it shouldn’t be a surprise to learn this isn’t like an 1100hp Mercedes SL. A carbon panel latches onto the windscreen surround and the tub, with hinged polycarbonate windows attached either side. Note the unique doors as well, now front-hinged dihedral. Aston says the roof can “simply be lifted off and stowed away”, but it isn’t clear yet exactly where – the Valkyrie doesn’t seem blessed with a surfeit of storage solutions. Just go out roofless when it’s really, really sunny, as it isn’t going back on in a hurry.

Sim development of the Valkyrie Spider is underway, with development prototypes set to follow soon. Tobias Moers said the new car takes the “passion and emotion” of the hardtop car “to the next level”. He added: “The sound of that 6.5-litre V12 revving to over 11,000rpm with the roof removed is something I cannot wait to hear.” You and us both, Tobias.

Aston says deliveries of the Spider are scheduled for the second half of 2022, but that seems a tad optimistic given that customers for the standard model are still waiting on their cars. And the development of that one has hardly been plain sailing. Still, we live in hope – more V12 Aston Martins in the world, even those patently unsuited to Britain, sounds like very good news to us.